The University of Texas at Austin recently announced that its carbon capture technology will be licensed by Honeywell Sustainable Technology Solutions to support lower-cost capture of emissions from power plants and heavy industrial sources. The technology was created by researchers at UT Austin through the Texas Carbon Management Program (TxCMP).

“We are thrilled that our decades of research have led to carbon capture technology that can significantly reduce carbon emissions,” said Gary Rochelle, professor in the McKetta Department of Chemical Engineering and leader of TxCMP at UT Austin. “The licensing agreement with Honeywell enables us to commercially scale this in ways that can make major contributions toward zero-emission efforts to address global warming and to reduce pollutants in surrounding communities.”

Honeywell plans to utilize the carbon capture technology to achieve its goal of carbon neutrality in its operations and facilities by 2035. The company reports that 15 million tons per year of carbon is being capture and used in storage/utilization applications through its CO2 Solutions process. Currently, Honeywell has the capacity to capture 40 million tons per year globally.

According to UT Austin’s release, Rochelle and his team have developed a second-generation amine scrubbing system through years of research and analysis. The patented solution uses an advanced solvent, allowing carbon to be captured at a lower cost with greater efficiency and smaller equipment.

The solution allows for “hard to abate” industries such as steel, cement and chemical plants; and coal, natural gas and bio-energy power plants to use the CO2 capture technology. 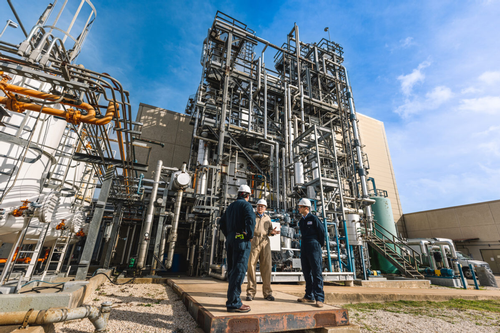 Installing this technology in typical power plant with 650 megawatt capacity would reportedly enable the capture of 3.4 million tons of CO2 annually, approximately the equivalent to removing 735,000 cars from the road each year.

Honeywell reports that the carbon removal technology can be retrofitted into existing plants or included in new installations. The CO2 is absorbed into the amine solvent, sent to a stripper to separate the CO2 and then compressed for geological sequestration or used in other applications.

In September, researchers from GE Research, UC Berkeley and the University of South Alabama were awarded a two-year, $2 million project for the development of a 3D-printed system for capturing carbon dioxide.

The AIR2CO2 research project was awarded through the U.S. Department of Energy’s Office of Fossil Energy and Carbon Management. While the DOE’s award totals $1.5 million, GE and its University partners will be providing a $500,000 cost share.

According to reports, the research team will combine 3D-printed heat exchanger technology with innovative sorbent materials to develop a system for effectively extracting CO2 from the atmosphere.

In breaking down each team member’s role, GE would reportedly be focusing on both the 3D printing and heat aspects, given the company’s extensive background in metal 3D printing, manufacturing and heat exchanger and thermal technology development gained through its gas turbine platforms for the energy and aerospace sectors.

UC Berkeley was slated to focus on the developing and applying sorbent materials for use in the system. Led by Professor of Chemistry Omar Yaghi, the team is specifically seeking to develop a method to extract targeted elements—in this case, CO2—from the atmosphere.

Making up the last of the trio, the University of South Alabama team planned to provide support when it comes to material selection for the rest of the decarbonization system and will be led by Professor Grant Glover.

A few months later, Japan announced the development of several projects to cut back on emission in the hopes of reaching net-zero.

The Tomakomai CCS Demonstration Project separates CO2 from the gas and is captured by chemical absorption. After applying pressure, the carbon is injected under the seabed. The two injection wells were drilled from onshore towards offshore sub-sea bed reservoirs.

According to JCCS, these wells are continuously monitored after injection for migration, distribution and any micro-seismic activity. It also monitors the surrounding marine environment to verify there are no leaks of CO2.

“The International Energy Agency estimates in 2050 we'll have to be capable of storing over seven billion tons of CO2 per year with CCS systems in order to achieve net-zero,” said JCCS President Nakajima Toshiaki. “This would allow to use fossil fuels in a cleaner way, or to capture CO2 directly from the atmosphere and store it underground.”