In addition to the signature public program, Climate ABC also offers several other programs designed both to educate the public about climate action and to drive substantive solutions in the building industries to mitigate climate change.

According to the Museum, the built environment is responsible for nearly 40% of carbon emissions worldwide and is a primary driver of global warming.

To mitigate the issues, the program focuses on the following aspects (ABC):

“The program goal is to promote a spectrum of solutions to support environmentally safe, healthy and resilient residential neighborhoods and business districts across the country and around the world,” wrote the Museum in a press release. “With Climate ABC, the Museum seeks to raise awareness about how the built environment impacts the quality of our lives and communities, and how rapidly evolving industry practices can contribute to a sustainable future.” 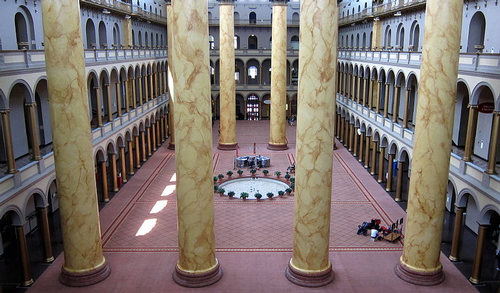 Ultimately, the combined program and roundtables aim to serve as an incubator to guide policymaking, sustainable development standards and community action.

“The National Building Museum’s mission is to educate and engage people about the built environment and its impact on lives and communities,” stated Aileen Fuchs, the Museum’s President and Executive Director. “The Museum, with its deep network and reputation in the building industries, is in a unique position to convene international thought-leaders and host critical conversations that inspired Climate ABC. We hope to connect the public with this ground-breaking new initiative and to challenge our industry constituents to engage and collaboratively problem solve.”

“Holcim is pleased to join the National Building Museum as the Lead Sponsor of Climate ABC,” said Josep Maset, VP Strategy and Commercial Excellence, Holcim in the U.S. “We believe this series will provide an effective platform to educate the public and raise awareness about the importance and urgency to combat climate change. The format also offers a working forum to develop and share specific and actionable solutions to reduce carbon emissions and build in a sustainable way.”

Shortly after his inauguration in 2021, President Joe Biden issued a statement announcing the United States recommitment to the Paris Agreement, done at Paris on Dec. 12, 2015. Biden accepted the Agreement, including every article and clause thereof, on behalf of the nation.

More recently, in October and November, nearly 200 countries met at the 26th United Nations Climate Change Conference of the Parties to develop plans to meet emissions goals and accelerate action on climate by 2030.

The COP26 was held from Oct. 31-Nov. 13 in Glasgow, Scotland, with leaders planning to discuss goals of the Paris Agreement and the UN Framework Convention on Climate Change.

The Breakthrough Agenda was launched at COP26, a commitment to work together to develop and implement clean technologies that are “essential to meeting the Paris Agreement goals.” The breakthroughs focus on the power, road transport, steel and hydrogen industries:

At the time, leaders also announced the Glasgow Climate Pact, which recognizes the urgent need to address climate change and strengthen climate action, acknowledges the impacts of the pandemic and notes the importance of all ecosystems and the role of communities in response to climate change. The document outlines key points in:

Shortly after the COP26 took place, President Biden announced plans to sign into law the largest federal investment in infrastructure in more than a decade. Joined by several members of Congress, the $1.2 trillion legislation is expected to repair more than just roads and bridges.

To mitigate the high usage, the Build Better Plan dedicated roughly $5 billion to various programs aimed at reducing electricity use in buildings, improving building materials and training on design, construction and maintenance for energy-efficient structures. The bill also plans to fund a series of problem-solving programs, for issues varying from drafty windows in affordable housing complexes to aged air ducts and outdated building codes.

This portion of funding was previously advocated by The American Institute of Architects in August, when the bill was being debated in Congress.