The Pulsar Plus 55-Suction Blast Cabinet has been described as the “Ferrari of blast cabinets” by Dorman Vick, who launched the Welding Pathway program at Samuel V. Champion High School in 2004.

“I’ve used wonky cabinets before,” Vick said, “and I can tell you that the cabinet Clemco gave us is quality. It’s so comfortable and easy to use. If 14-year-old high school freshman can operate it with no problems, anyone can. That’s smart engineering.”

About The Welding Pathway

Vick, who has been welding since he was 14 years old, welded and pipe-fitted full-time after graduating from college. In 2003, Vick decided to go back to college to earn his teaching degree, inspired by a talk at a church from country singer George Strait’s father, a lifelong high-school teacher, and a friend who was retiring from teaching welding classes at Clark High School in San Antonio. 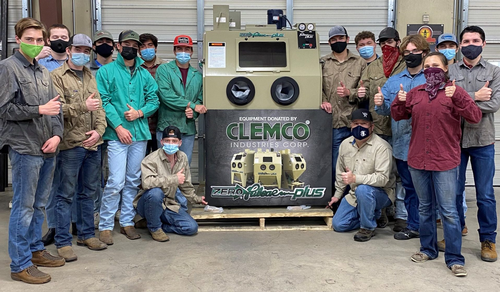 According to Clemco, his first year of teaching was at Clark High, but was then hired at Boerne Independent School District to start up the high school’s Welding Pathway. Vick said that he was given an empty building with worn-out tools.

“We threw all of that old equipment away,” he recalled. “With help from many hard-working kids, we built the program up from just about nothing to where it is today.”

Projects created over the years by the Welding Pathway participants include:

“I’ve continued to weld part time on weekends and during summer break when I can, especially when Texas oil fields were booming,” Vick said. “It helps me bring fresh, real-world content to the students. Many students have incorrectly been told that the trades are a second-tier career choice. Nothing could be further from the truth. Skilled trades are the backbone of this nation. There’s no shame in coming home dirty after a day’s work.

“It’s awesome to know that Clemco understands this and is investing in our youth to help bring back American trades.”

In fall 2020, Vick wanted to help his students more quickly earn their industry-level welding certifications and free up their time to work on more complex and creative projects. He thought about the blast cabinet, since they spent a lot of time removing mill scale off their test weld coupons and other projects using grinders or hand tools.

“I did my research,” Vick explained, “and everybody in the industry I talked to said the quality of Clemco equipment sets it apart in the sandblasting business and the world. So I called Clemco and asked if they had a cabinet they would be willing to donate. They were the only manufacturer I called.”

“Vick asked if Clemco could donate a base-model cabinet,” Kurtis Ohse, Clemco Director of Marketing, remembered. “I got back to him a couple months later with bad news and good news. We couldn’t donate a base model. But we could donate a cabinet from our new line of Pulsar Plus Cabinets.”

According to Clemco, ZERO brand Pulsar Plus Cabinets are its newest line of blasting cabinets. The line features six models, two of which are pressure-blast and four are suction-blast, equipped with 17 ergonomic and state-of-the-art features. The cabinets are all-in-one with a reclaimer, dust collector and blast system.

The Welding Pathway received their cabinet in February 2021.

“We got the cabinet set up on day one,” Vick recalled. “That day the students went to work blasting mill scale off their welds with No. 8 glass bead. It was like going from the Flintstones to the penthouse. Not only does the cabinet make the work go about 80% faster, but it is far safer than hand griding and produces fantastic finish on the metal.”

The students have recently used the blast cabinet to create a sculpture of a bed of metal roses as a thank you gift for a celebrity supporter of the Welding Pathway, including blasting mill scale and beads off test plates and welding the roses.

“I had a summer job at a firearms manufacturer where I used a cabinet. But the cabinet from Clemco is a million times better,” said senior Ryan Myers. “It can get right inside creases and tight corners. I’m getting knowledge and experience that will give me a head start when I job hunt.”

“I can’t tell you how much the cabinet has helped us. Right now we’re getting our welding certifications. With the cabinet we can sandblast mill scale and beads off our test plates and get them as clean as possible,” said Caleb Roberts, a junior in the program. “We couldn’t do that before with grinders, and now I can finish five welds in the time that before I could only finish one. We really appreciate the donation.”

“The cabinet is so easy and convenient to use. To sandblast without it would require a body suit and a lot more space,” added senior Nathan Young. “I only have to put the part in the cabinet, my hands in the gloves, and then I’m ready to go. We mainly use the cabinet to clean up our welds and to prep parts for painting. It saves us so much time.”

Vick said alongside learning technical and fabricating welding skills in the program, the students are learning to believe in themselves and in others.

“To see kids come into our shop that maybe the system has deemed cannot go to college,” Vick explained, “and then to watch them shine and become superstars, build anything they put their minds to, that’s what it’s about. What we’re doing is more than helping young people build careers. We’re building strong young men and women. They leave here knowing they can come up with an idea and make it a reality.

“I also see the change in my students when they give back to heroes and the community. No textbook can teach somebody that giving is better than receiving, that freedom isn’t free. They now know what it feels like to change somebody’s life. That’s so cool.”