As architecture firms, construction companies and coating contractors alike begin working on rebuilding their revenue bases, they are also faced with the obstacle of restoring pre-pandemic staff and business culture best practices.

Before the COVID-19 outbreak in 2020, many companies were expecting another year a revenue growth. However, just two months after the worldwide shutdown, the United States’ economy lost over 22 million payroll positions, its unemployment rate rose from 3.5% to 14.7% and consumer confidence (both current and expected) dropped by roughly 30%.

Both industrial and commercial sectors have reported that they use The American Institute of Architects’ Architectural Billings Index, in that the report indicates that any score above 50 suggests an increase in billings and positive business conditions overall.

Shortly after the pandemic swept the nation in March 2020, the AIA reported a record drop in the demand for design services. During that time, the ABI was recorded to have dropped 20.1 in points to a score of 33.3. The score nearly doubles the decrease of 9.4 points experienced at the beginning of the 2001 recession and the loss of 8.3 points recorded during the Great Recession, making it the index’s largest single month decline in its nearly 25-year history.

In that same report, new project inquiries and new design contracts also experienced a steep decline, reporting scores of 23.8 and 27.1, respectively. The AIA noted at the time that billings were reported to have declined across all regions of the country and in all firm specializations, revealing softened conditions, particularly in the Northeast—which was likely connected to various construction shutdowns.

Although firms with a commercial/industrial specialization also reported a more slightly modest decline, in contrast, firms with an institutional specialization saw the smallest of declines, most likely due to an increase in work needed for the construction of more healthcare facilities. Schools were also reported to be making early headway on projects, as many are closed for the rest of the academic year.

In addition to issuing the ABI, in mid-March, the AIA also asked responding firms a series of questions about actions they’ve taken so far in response to the COVID-19 pandemic, and how they think the pandemic and ensuing economic downturn will impact their firms through the end of the year.

In tallying the responses and varying concerns, the AIA reported that responding firms expected, among other things, to see a 15% decrease in billings during the month of April; to expect a decline in revenue through the end of the second quarter, with a third of firms expecting a loss of 25% or more; and revenue losses of 17% over the next three months. 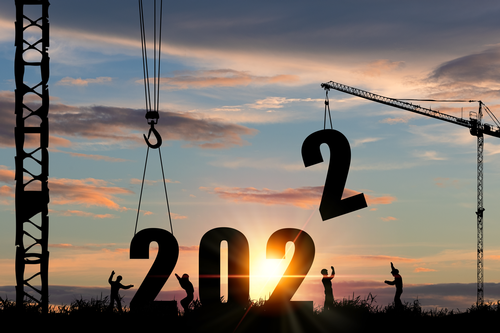 To adjust to these financial changes, the AIA also reported that:

Overall, a little over half of the respondents reported that the although the economic slowdown was expected to significantly impact its business, they believed it was manageable.

Despite hopes for a swift recovery in the industry, it wouldn’t be until February 2021 that the ABI would report its first positive mark. That month, the AIA’s ABI score was 53.3 compared to 44.9 in January. In addition, the February score also marked the first time the design contract score rose back into positive territory since the COVID-19 pandemic began with a score of 51.6 compared to 48.8 in January.

The new project inquiries score for February reached a 22-month high with a score of 61.2 compared to 56.8 in January.

Most recently, in November, the AIA reported its tenth consecutive month, revealing a score of 51. Scores for both new project inquiries and design contracts moderated slightly, but remained in positive territory, posting scores of 59.4 and 55.8, respectively.

The report went on to note that the regional and sector categories were calculated as a three-month moving average, whereas the national index, design contracts and inquiries are monthly numbers. Despite the continued positive reports over the last several months (all managing to stay above a score of 50), the Institute believes that changing conditions could be on the horizon.

“The period of elevated billing scores nationally, and across the major regions and construction sectors seems to be winding down for this cycle,” said AIA Chief Economist, Kermit Baker, Hon. AIA, PhD.

Over the last six months, the industry was faced with yet another obstacle: a shortage and price surge in paint. In September, some experts pointed to a combination of demands by do-it-yourselfers stuck at home, the strange freeze that took over Texas earlier this year and worsening supply chain issues as the reasons why the coatings industry was under pressure.

However, the Federal Reserve reported that higher inflation is only “transitory” or temporary and appeared to be showing signs of abating. The central bank’s report was backed by White House officials, who also stated that while they were sensitive to the rising prices, they foresaw that supply chain issues would soon subside, having observed the slight downward trend in hardware, lumber and other building materials.

Despite the opinions of some of the nation’s leading economists and financial advisors, many believe that the ongoing situation could persist well into 2022, further burdening many of the small businesses that are already struggling to make ends meet.

Equity analyst firm, Morgan Stanley, reports that the inflation will continue through the first half of next year then veer into deflation for the second half. In specifically refencing the coatings industry, the firm said this represents “the peak of raw material availability issues/cost inflation, but just the early stages of price achievement against it.”

Although Architect magazine wasn’t aware of the paint shortage or the COVID-19 Omicron variant when it wrote its plan for redesigning pandemic practices, it was certainly on the right track in saying that recovery would vary a lot by a firm’s specialty.

Over the course of the pandemic, a variety of market reports have been observing the different industries for spending gains. This past November, construction spending was reported to have experienced an uptick, as gains in private residential outweighed decreases in public outlays.

The residential sector experienced its first rebound earlier that year, however, when the U.S. Census Bureau and the U.S. Department of Housing and Urban Development released a report on new residential construction, revealing a seasonally adjusted annual rate of 1.62 million units in August, 17.4% above the pace of a year ago.

Among other large segments, commercial construction—comprising warehouse, retail and farm structures—dipped 0.1% in November but jumped 15.1% year-over-year.

However, despite these positive numbers, it was reported that spending on public construction projects fell 0.2% and is down 0.9% year-over-year. Nonresidential construction also remained flat during the month but is up 3.4% since November 2020.

According to an analysis of federal construction spending data by the Associated General Contractors of America, public sector investments were down in part because Congress has failed to provide funding so far for the Bipartisan Infrastructure bill enacted last year.

While different sectors await government funding for projects, another concern among contractors continues to be “finding adequate staff” or “retaining staff,” especially when salaries are reduced in some cases and mandates for vaccines loom.

On the topic of staffing, the Commercial Painting Industry Association recently hosted a free webinar, “Recruiting and Selection Strategies.” Led by Xenium HR’s Vice President of People Development and Culture, Suzi Wear, the webinar worked to inform viewers how to better identify talent acquisition strategies based on business needs and objectives, implementing new techniques and establishing standardized interview questions and evaluation processes, among other topics.

The webinar originally premiered on Dec. 16, 2021, but can still be viewed here.

In other attempts to keep current employees on staff, the Associated General Contractors of America recently filed a new suit to block the Biden Administration’s vaccine mandate on federal contractors, despite its prior efforts in pushing its members to get the COVID-19 vaccine.

“We are as eager as anyone to see more construction workers become fully vaccinated,” said Stephen E. Sandherr, AGC Chief Executive, at the time. “But imposing a strict mandate on a small sector of the construction industry will only drive vaccine-hesitant workers out of that sector, and to one of the many other sectors also desperate for more workers.”

On the same day the new guidance was issued in the fall, Ben Brubeck, Vice President of Regulatory, Labor and State Affairs of the Associated Builders and Contractors, released the following statement:

“ABC continues to encourage construction industry stakeholders to get vaccinated, because ensuring healthy and safe work environments for employees is a top priority of ABC and its members. However, today’s Task Force guidance is very broad in scope and raises a number of unresolved questions.

“We will be reviewing the guidance carefully with industry stakeholders to understand its full impact and unintended consequences. However, based on our initial reading, this guidance will result in additional compliance burdens, exacerbate the construction industry’s skilled workforce shortage and increase costs for federal contractors and taxpayers.

“This is a top issue for the contracting community and adds to a list of concerns. As with most industries, the COVID-19 pandemic has already created and accelerated a host of challenges facing the construction industry, which includes a skilled workforce shortage, rising material costs, supply chain disruptions, jobsite shut-downs, additional health and safety protocols and new government regulations.”

Looking ahead, Brubeck reported that ABC would be participating in the Federal Acquisition Regulatory Council’s rulemaking process for this rule and will be fully engaged in the forthcoming OSHA ETS rule applying to all employers with 100 or more employees.