Scientists from the National Korea Maritime and Ocean University have recently developed an anticorrosion protective coating for ships and marine and coastal facilities and structures.

“When I served in the navy, I was constantly looking at rusting machinery. Since then, I have become fully engaged in research on how to produce better anti-corrosive steels,” said Professor Myeong-Hoon Lee of the Korea National Maritime and Ocean University, who guided the study.

Coating steel with aluminum is a common method of corrosion resistance, but in marine applications it reacts with the chloride ions in salt water. Adding magnesium and silicon was a possible solution to this issue.

However, KMOU noted that magnesium cannot be easily deposited as a coating using the conventional method of dipping the steel into a hot bath of metal salts. For the study, the researchers took aluminized steel and then plated it with magnesium using “physical vapor deposition.” 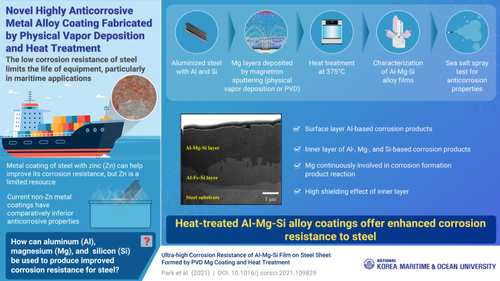 KMOU
Scientists from the National Korea Maritime and Ocean University have recently developed an anticorrosion protective coating for ships and marine and coastal facilities and structures.

The coating was then exposed to a temperature of 375 C (707 F), characterized and tested against corrosion with a salt spray test.

“Our research reveals how a highly corrosion-resistant steel can be produced using a simple change in the surface treatment protocol. This makes it very meaningful for conserving energy and environmental resources,” explained Lee.

In March, scientists from the Helmholtz Centre for Materials and Coastal Research in Geesthacht, Germany, developed a magnesium alloy that was reported to have an elevated resistance to corrosion.

The alloy was reported to have a lower corrosion rate compared to ultra-high-purity magnesium, which the scientists claimed approaches stainless magnesium through alloying pure magnesium with tiny amounts of calcium.

A team of scientists added tiny amounts of calcium to the magnesium alloy, careful to retain the material’s purity. The calcium reduces the cathodic water reduction kinetics, which in turn makes the magnesium more resistant to corrosion and allows for the development of a protective surface film. The calcium additive is also reported to stabilize impurities (such as iron and silicon) within the alloy.

In November, a study found that biochar nanoparticles (BCN), or graphene oxide, derived from spruce wood and wheat straw can improve corrosion resistance in zinc-rich epoxy coatings. The study, published in Progress in Organic Coatings, suggests a more sustainable option for the coatings industry.

Four kinds of coatings were prepared for analysis:

The study also found that biochar increases the interlayer spacing of coatings, the galvanic corrosion of GO is relatively week and that carbon nanotubes should not be used to modify GO in zinc-rich coatings.

Later that month, researchers at Rice University in Houston developed an anticorrosive and self-healing coating for steel.

The development stemmed from research conducted by Pulickel Ajayan, a scientist at the Rice lab of materials, who originally created a compound composed of sulfur and selenium, which was shown to be more insulating than most flexible materials and more flexible than most dielectrics.

The lightweight sulfur-selenium alloy “combines the best properties of inorganic coatings like zinc- and chromium-based compounds that bar moisture and chlorine ions but not sulfate-reducing biofilms, and polymer-based coatings that protect steel under abiotic conditions but are susceptible to microbe-induced corrosion.”

Scientists placed small slabs of mild steel treated with the coating alongside plain steel in seawater for a month. According to Rice, the coated steel showed no discoloration or other change, but the bare steel rusted significantly.

The lab also exposed these samples to plankton and biofilms for 30 days, simulating sulfate-reducing bacteria that accelerate corrosion. The inhibition efficiency for the coating was calculated as 99.99%.