A research team from the Department of Environmental Sciences at the University of Basel and the Alfred-Wegener Institute at the Helmholtz Centre for Polar and Marine Research on the island of Heligoland recently published a study analyzing microplastic particles and paint fragments in Antarctica.

The research team, led by University of Basel Professor Patricia Holm and Dr. Gunnar Gerdts of AWI, hypothesized Weddell Sea would have substantially lower concentrations of microplastics due to its minimal human activity. However, microplastic concentrations were only slightly lower than other more populated regions in the area.

“But it's also important to know which plastics appear, in order to identify their possible origin and in the best case to reduce microplastic emissions from these sources,” explained Leistenschneider. 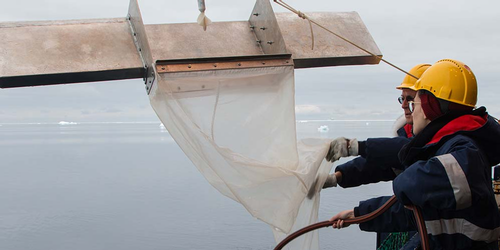 University of Basel
A research team from the Department of Environmental Sciences at the University of Basel and the Alfred-Wegener Institute at the Helmholtz Centre for Polar and Marine Research on the island of Heligoland recently published a study analyzing microplastic particles and paint fragments in Antarctica.

The team found that 47% of the microplastics analyzed were plastics used as a binding agent in marine paint, suggesting that marine paint and shipping traffic are possibly a key source of microplastics in the Southern Ocean.

Plastics used in packaging materials and fishing nets, like polyethylene, polypropylene and polyamides, were also identified in the particles. However, Leistenschneider cautions that although it is possible to determine the different plastics used, the exact origin or previous application of the microplastic fragments is not known.

The study also noted that more than half of the sample fragments collected had visual characteristics similar to the ship paint on the research vessel Polarstern. Researchers further analyzed these fragments at the Center for Marine Environmental Sciences (Marum) at the University of Bremen.

Utilizing x-ray fluorescence (XRF) to identify pigments and fillers, it was revealed that 89% of the 101 microplastic particles studied had originated from the team’s Polarstern ship, with the other 11% coming from other sources.

“A number of comparative methods must be used to determine the origin of paint particles,” Leistenschneider said about accurately classifying the paint fragments. According to the University of Basel, previous microplastic studies typically exclude particles similar to the paint on their own research vessels without further analysis.

Researchers indicated in the study that ship paint would typically be released during ship maintenance at docks, but also during operation through coating abrasion and weathering. They also noted that water surface tension might retain paint particles in the water surface layer, negatively affecting the environment.

“Developing alternative marine paint that is more durable and environmentally friendly would make it possible to reduce this source of microplastics and the harmful substances they contain,” Leistenschneider says in summary.

The full study can be read here.

In October, a study conducted by the University of Plymouth and the Marine Biological Association (MBA) observed that paint flakes could be one of the most abundant types of microplastic particles found in the ocean.

The study, published in Science of the Total Environment, collected 3,600 samples from the North Atlantic Ocean. Each cubic meter of seawater reportedly contained an average of 0.01 paint flakes, following behind 0.16 particles per cubic meter of microplastic fibers.

“Paint particles have often been an overlooked component of marine microplastics, but this study shows that they are relatively abundant in the ocean. The presence of toxic metals like lead and copper pose additional risks to wildlife,” said Andrew Turner, the study’s lead author and associate professor in environmental sciences at the University of Plymouth, in an interview.

These paint flakes also contained high quantities of lead, iron and copper due to having anti-fouling or anti-corrosive properties. Researchers explained that this could pose a threat to the ocean and marine life if ingested.