Assessed by our panel of painting experts, the following project was awarded in the program’s “Interiors, Commercial + Public Buildings” and “Judges’ Choice” categories:

Originally opened in 1912, the James A. Farley Building in New York City was designed by McKim, Mead & White in the Beaux-Arts style and in its prime, served as the city’s main United States Postal Service branch. The building’s Corinthian-inspired facade, which includes 20 monumental columns that span from 31st to 33rd Streets, was intended to match the scale of the architect’s original Pennsylvania Station building.

In 1966 the structure was recognized as a New York City landmark and a little under ten years later, in 1973, was added to the National Register of Historic Places. 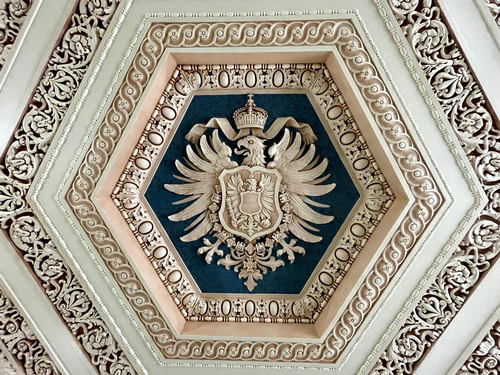 According to reports, interior restorations were first launched in 2019 and were carried out by who is touted as the nation’s largest specialty contractor for the preservation and restoration of historic buildings and architectural art, EverGreene Architectural Arts. Headquartered in New York, EverGreene also has offices in Chicago, Washington D.C. and Los Angeles.

EverGreene was reported to be heavily involved with the restoration of many of the building’s historic spaces, including the original Postmaster’s suite, the 33rd Street lobby and cafe, and the 8th Avenue postal lobby. Restorations also involved connecting the building’s main postal lobby to the Moynihan Train Hall. Many of the spaces had gone unused or were neglected for decades and required major attention to bring them back to their near original design.

“The Farley Post Office Lobby has been an incredibly rewarding project to be part of,” said Project Manager, Andrew Maziarski. “Knowing what the space looked like a year ago, and seeing what it has become, has been a career highlight. The craftspeople involved with this restoration took great pride in their work and have helped to renew a New York City Landmark.”

EverGreene’s scope of work included restoring plaster, paint, metal, terrazzo, marble, wood and historic lighting. The work can reportedly be best viewed by walking through the main postal lobby and looking up at the ornate plaster ceiling that was meticulously repainted to give the space a much needed makeover.

For the project, EverGreene used roughly 100 gallons of Regal Select by Benjamin Moore and about 20 gallons of Scumble Glaze by Polyvine.

Reported to be the nation’s largest specialty contractor for the preservation and restoration of historic buildings and architectural art, EverGreene Architectural Arts is headquartered in New York, with offices in Chicago, Washington D.C. and Los Angeles.

EverGreene’s teams are made up of business developers, conservators, designers, craftspeople, artists and project managers dedicated to excellence and cultural heritage. Recently, the company celebrated its 40th anniversary.

In looking back on EverGreene’s projects since starting the company in 1978, Jeff Greene, Founder & Chairman, EverGreene Architectural Arts, said, “The Meridian Opera House in Mississippi was an incredible project, as well as the Eldridge Street Synagogue, the Sacramento Cathedral, the Allen County Courthouse in Ft. Wayne Indiana, re-creating the 1926 Ohio Theatre Lobby in Cleveland, to name a few.”

Looking to the future of the company, Greene notes that he is most excited for more change in the industry.

“If you told my twenty-four-year-old self all of the incredible projects that we would do, all the communities we would help serve, I would not believe it. But at the end of the day, I hope to always remember the thrill I had in painting my first public art or restoring my first theater or church, and that the desire to provide and preserve art to be appreciated by communities continues.”

EverGreene’s commercia project portfolio, and others, can be viewed here.