Despite the Associated General Contractors of America’s efforts to promote COVID-19 vaccination for construction workers, the association reportedly filed suit to block the Biden Administration’s mandate on federal contractors.

Filed last week in a federal court in Texas, the AGC argues that the relatively small federal contracting sector will be negatively affected by the mandate, given that there is an estimated half of construction workers who’ve declared themselves vaccine hesitant.

One contractor supporting the lawsuit went as far to say that the once the mandate takes effect, they’re under the impression that half of its workforce would rather leave their jobs than get vaccinated. In a statement, the AGC furthered the contractor’s point, saying that the mandate would leave federal construction projects “struggling to reach completion on time and within budget.”

In a new guidance issued by President Joe Biden earlier this year, federal contractors and subcontractors were required to be fully vaccinated against COVID-19 by Dec. 8. However, that deadline has since been extended to Jan. 18, 2022.

The guidance went on to report that it would also apply to “subcontractors at all tiers, except for subcontracts solely for the provision of products,” in addition to all workplace locations as well as individuals on remote work or who work outside.

Companies that are currently doing business with the government directly have been required to designate a coordinator to implement the new workplace safety requirements. 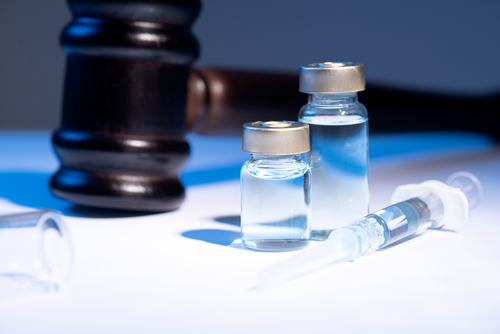 Under the new rules, federal contractors and subcontractors with a covered contract will be required to conform to the following workplace safety protocols:

A full copy of the new guidance can be viewed here.

In November, the U.S. Department of Labor's Occupational Safety and Health Administration published an emergency temporary standard requiring employers with 100 or more employees to implement a COVID-19 vaccination requirement for their employees by Jan. 4, 2022.

Employers are also required to provide their employees with a weekly testing alternative to those who refuse or are unable to receive a vaccine, in addition to wearing a face covering at work in lieu of vaccination.

According to reports, the new ETS requires that employers include all employees across all U.S. locations, regardless of employees' vaccination status or where they perform their work, when determining where they rank on the OSHA-established threshold.

The rule also notes that part-time employees count towards the company total, but independent contractors do not. There are sections included in the ETS that cover other specific company situations, such as franchisees, multi-employer workplaces and staffing agencies.

If an employer meets the OSHA threshold for the new ETS, they should also bear the cost of providing up to four hours of paid time and reasonable paid sick leave needed to support vaccination.

However, in the event that an employee refuses vaccination, the employer is not responsible for payments associated with regular COVID-19 testing or the use of face coverings.

The new rule is estimated to affect some 80 million workers, according to The New York Times.

Additional reports imply that companies reaching the threshold will be largely responsible for enforcing the new rule. While there are not enough state and federal OSHA inspectors to follow-up on the vaccinations nationwide, the Administration reports that it plans to respond to employee complaints and will add coronavirus-related inspections to their to-do lists when onsite.

Employers that violate the rule can face fines of up to $13,653 per violation for serious violations and 10 times that for willful or repeated violations.

“We are as eager as anyone to see more construction workers become fully vaccinated,” said Stephen E. Sandherr, AGC Chief Executive. “But imposing a strict mandate on a small sector of the construction industry will only drive vaccine-hesitant workers out of that sector, and to one of the many other sectors also desperate for more workers.”

The filing includes a motion for a temporary restraining order and sworn statements from several contractors detailing how the federal contractor mandate is hurting their businesses.

“JMJ finds itself between a rock and a hard place because it faces either losing its employees and subcontractors if it complies with the vaccine mandate, or losing a third of its revenue by no longer serving the federal Government,” stated Bridgette Wiggins, JMJ Construction Company’s Vice President.

Chiming in, Eddie Stewart, Caddell Construction’s Chairman and Chief Executive said, “The more employees we lose, the more strained our performance becomes. It is already difficult to get skilled labourers who can satisfy all of the federal requirements, such as the background and security clearance requirements for access to military bases and other federal facilities.”

Also cited in the filing, AGC pointed out that data by construction health and safety research organization CPWR revealed that for the week beginning Oct. 24, only 52.5% of respondents who identified as construction workers reported they had been vaccinated, compared to 80.7% of all other occupations.

The figure has reportedly been consistent for construction workers since May 2021.

On the same day the new guidance was issued in the fall, Ben Brubeck, Vice President of Regulatory, Labor and State Affairs of the Associated Builders and Contractors, released the following statement:

“ABC continues to encourage construction industry stakeholders to get vaccinated, because ensuring healthy and safe work environments for employees is a top priority of ABC and its members. However, today’s Task Force guidance is very broad in scope and raises a number of unresolved questions.

“We will be reviewing the guidance carefully with industry stakeholders to understand its full impact and unintended consequences. However, based on our initial reading, this guidance will result in additional compliance burdens, exacerbate the construction industry’s skilled workforce shortage and increase costs for federal contractors and taxpayers.

“This is a top issue for the contracting community and adds to a list of concerns. As with most industries, the COVID-19 pandemic has already created and accelerated a host of challenges facing the construction industry, which includes a skilled workforce shortage, rising material costs, supply chain disruptions, jobsite shut-downs, additional health and safety protocols and new government regulations.”

Looking ahead, Brubeck reported that ABC would be participating in the Federal Acquisition Regulatory Council’s rulemaking process for this rule and will be fully engaged in the forthcoming OSHA ETS rule applying to all employers with 100 or more employees.

In taking additional measures, ABC was also reported to have sent a letter to OMB and the Task Force on behalf of its federal contractor members with practical feedback on the EO.

Around the same time, in Australia, project sites were shut down after construction workers engaged in violent protests regarding Australia’s Victorian Government announcement to mandate COVID-19 vaccines.

The announcement to require mandatory vaccination for construction workers arrived amid the country’s uptick in delta variant cases. The new mandate required that construction workers across Victoria show evidence to their employers that they have had the first dose of a COVID-19 vaccine by 11:59 p.m. on Sept. 23.

In other U.S. locations taking on their own mandates, Oregon Gov. Kate Brown required that all employees working as K-12 educators, health care workers and all state employees would need to be vaccinated to work.

The newly mandated employees were given until Oct. 18 to be vaccinated or they could face termination. For those opposing the mandate, some have also gone to protesting; however, a group of state police and firefighters went as far to sue Brown over the requirement.