Final Coatings+ 2021 Comes to a Close

The final SSPC: The Society for Protective Coatings Coatings+ conference wrapped up Thursday after a packed schedule filled with training courses, technical sessions and networking events.

The event, held Dec. 13-16 at the Phoenix Convention Center in Phoenix, Arizona, was presented by the Association for Materials Protection and Performance (AMPP) and featured the annual SSPC awards luncheon, honoring the industry’s top people and projects; an exhibit hall with more than 150 exhibitors, with companies like HoldTight Solutions and Seal for Life Industries; a technical program spanning many of the different topics relevant in the industry; opening ceremonies; and more.

At the final awards luncheon on Dec. 13, following award presentations, a ceremonial passing of the keys was held to recognize the incoming and outgoing chair members, presented by AMPP Board Chair Tim Bieri and Board Vice Chair Sam Scaturro. SSPC Executive Director Bill Worms, who continued to head SSPC at its Pittsburgh headquarters throughout the organizations’ combination process, received a standing ovation at the end of the program. 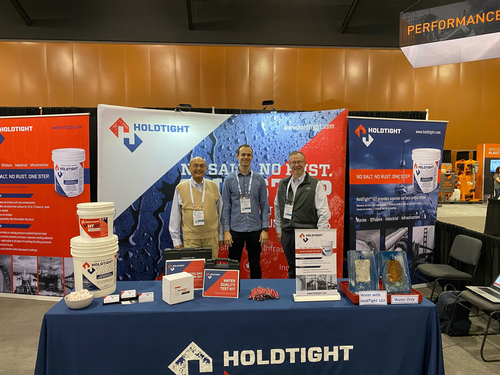 “[The event] honored SSPC’s legacy and pointed us to the future,” said AMPP CEO Bob Chalker about the awards luncheon, also taking a moment to thank Worms for his leadership.

A Round Robin session with Chalker was held after the ceremony to answer any questions about the NACE and SSPC merger.

Next year, AMPP plans to combine the best of SSPC’s Coatings+ and NACE International’s CORROSION conference into one event, the new AMPP Annual Conference and Expo expected to be held March 6-10, 2022 in San Antonio, Texas.

In recognizing those for their significant development and dissemination of education materials and technical information relating to protective coatings and its applications, SSPC gives The Richard W. Drisko Coatings Education Award. This year, that award was presented to:

The SSPC Honorary Life Member Award, for recognizing extraordinary contribution and long-term activity on behalf of SSPC, was awarded to Bob McMurdy.

Joyce Wright, Huntington Ingalls Industries – Newport News Shipbuilding, received the Women in Coatings Impact Award, which recognizes women who have contributed to creating a positive impact on the culture of the coatings industry.

Named for the SSPC’s Executive Director from 1957-1984, the John D. Keane Award of Merit acknowledges outstanding leadership and significant contribution to the development of the protective coatings industry and to SSPC. This award was presented to Mark Ingle, P.E., NAVSEA.

The President’s Lecture Series Award is also given by SSPC every year in a blind judging by the SSPC President for the most favorable paper being given during the technical session. This year, the lecture series award was presented to Efficiency of Zinc Content in Sacrificial Protection of Coatings written by:

Additionally, SSPC presented Outstanding Chapter Awards, where one award is presented to one North American Chapter and one International Chapter. This year, the awards were received by:

Seven outstanding projects in the protective coatings field from the past year were honored with SSPC Structure Awards at this year’s SSPC Awards Luncheon.

The Charles G. Munger Award, which recognizes outstanding achievements in an industrial or commercial coatings project demonstrating longevity of the original coating, went to the Enbridge Tank 79 Mural Restoration in Saskatchewan, Canada.

The project was carried out for Hollywood Park Land Company, LLC by contractors Commerce Industrial Coatings and Devco Sandblasting, in conjunction with architect HKS, Inc. and coating supplier Carboline Company.

The Eric S. Kline Award is given in recognition of outstanding achievement in industrial coatings work performed in a fixed shop facility. This year’s Kline Award went to the Globe Life Field, located in Arlington, Texas, presented by Kline’s son.

The project was carried out for the MLB Texas Rangers by contractors W&W Afco Steel in conjunction with coating supplier The Sherwin-Williams Protective & Marine Coatings.

The George Campbell Award is given to recognize a single outstanding achievement in the completion of a difficult or complex industrial coatings project. The Campbell this year was given to the Liberty Bridge in Pittsburgh.

The project was carried out for the Pennsylvania Department of Transportation by contractor Avalotis Corp. in conjunction with architect, engineer and consultant HDR Assoc. and coating supplier The Sherwin-Williams Protective & Marine Coatings.

The project was carried out for the SPCA – Lake Jackson by contractor Lonestar Resin Systems in conjunction with coating supplier Carboline Company.

The Military Coatings Project Award of Excellence is given in recognition of exceptional coatings work performed on U.S. military ships, structures or facilities and was awarded to the USS Spruance at the BAE Systems Ship Repair Sand Diego.

To kick off the event, Coatings+ hosted the third annual Phil Calvo Memorial Golf Tournament, held at the TPC Scottsdale’s Champions Course on Dec. 12 and sponsored by The Sherwin-Williams Company.

AMPP reports that the winner teams were as follows:

The welcome reception on Dec. 13 celebrated attendees gathering for the first time since February 2020. The event, sponsored by Carboline, was held at the Sheraton Grand Phoenix’s Valley of the Sun Ballroom. Wanting to keep the hundreds of guests in the holiday spirit, the reception’s theme was “Winter Wonderland,” featuring a hot chocolate bar and a jazz trio.

The final conference boated the largest list of learning opportunities yet—Coatings+ workshops planned to provide attendees with useful training and skills on popular coatings topics, professional and employment development and addresses changes and programs resulting from the recent merger of SSPC and NACE International to create AMPP.

To kick off the flagship event for attendees, Charles Brown, Mike Baase, and Chris Farschon of Greenman-Pedersen, Inc. presented the “Coatings 101” workshop. The goal was to provide attendees with a basic understanding of how protective coatings are specified and applied to meet a project’s objectives.

At the same time, the “Available Training for DoD or DoTs” session was being hosted and moderated by GPI’s Paul Vinik. Guests were encouraged to ask questions and chat with their peers.

On Dec. 14, AMPP held the “Cathodic Protection for the Coating Professional” and was presented by Elzy Technology Corp.’s Pete Ault and James Ellor. Described as one of the “more interactive workshops” of Coatings+, the presentation portion of the workshop explored the basics of cathodic protection on marine and underground structures