Seattle City Councilmembers are planning to address its over 1,100 unreinforced masonry buildings in need of seismic retrofitting, most of which were built before 1945.

The urgency to consider strategies to better protect these at-risk structures arrives shortly after reports surfaced regarding Seattle’s vulnerability to potential earthquakes and tsunamis.

Plans to mandate retrofitting Seattle go as far back as the 1970s, however, when legislation failed trying to approve new building policies. According to the city’s Funding URM Retrofit Report, a URM Policy Committee was established in 2012 in order to begin developing recommendations for Seattle’s Department of Construction and Inspections through a mandatory URM seismic retrofit program.

Though legislation was expected the year following establishment of the committee, a mandate for retrofits was repeatedly postponed, while a ninth economic analysis since the '70s had been ordered instead, reported The Seattle Times. 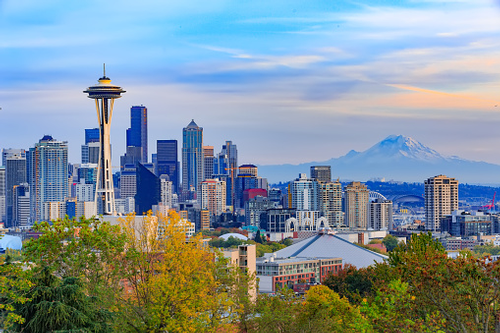 CommunistSquared, CC-Zero, via Wikimedia Commons
Seattle City Councilmembers are planning to address its over 1,100 unreinforced masonry buildings in need of seismic retrofitting, most of which were built before 1945.

It wouldn’t be until July 2017 when the SDCI would receive recommendations for unreinforced masonry structures (which to date, still haven’t been enacted). At the time, the only laws mandating retrofits were when a building was undergoing a remodel or significant changes, which then required owners to bring the structure up to current earthquake codes.

In February 2018, The Seattle Times reported that there were more than 1,100 buildings likely to topple in the event of an earthquake. With the city sitting in the proximity of three faults, finding an efficient way to pay for these necessary upgrades was becoming an “urgent issue.”

In the conclusion of the article, city officials claimed that they wouldn’t be able to have any draft legislation on mandatory retrofits until 2019—and not before they could create a package of financial incentives.

By July 2018, the NDC became involved, helping to identify potential funding and financing options, especially for property owners facing financial difficulties related to what would be new requirements.

“Now it’s about diving into the details of what a policy change could look like,” said Seattle Department of Construction and Inspections spokesperson Bryan Stevens in 2019. “You’re dealing with balancing life safety issues with the cost of making those improvements and the concern over displacement of tenants.”

According to Chuck Depew, Senior Director of the NDC, there needs to be a combination of public and private resources in order to put the report into action. As an example, Kuow.org suggested a combination of federal and state tax credits, FEMA grants, various funding, local philanthropy and private loans.

While a new policy was still a long way away then, SDCI hoped that new recommendations in how to pay for the upgrades would be sent to the mayor by the end of 2019. However, the Seattle City Council was expected to discuss these new policies during the first quarter.

At the beginning of the month, one of North America’s most active fault lines experienced a slew of more than 40 earthquakes, ranging between magnitudes of 3.5 to 5.8. While the seismic activity was reported to only affect an over 200-mile-long Oregon coast in Newport, the event heightened the level of concern of millions in the region regarding safety and future instances.

Just a few weeks before the onslaught of seismic activity, The Seattle Times noted on Oregon’s efforts to outfit its schools for seismic safety while simultaneously calling out Washington for its vulnerability to potential earthquakes and tsunamis.

According to additional reports, more than 1,100 buildings are vulnerable, with several of them being schools, with no requirements in place to improve them. In a report to state legislators, researchers found that the seismic soundness of 561 school buildings ranked Washington-based Pacific Beach Elementary School as one of the worst in the nation.

Built in 1956 before seismic construction codes, the complex is a scant three blocks from the beach—also making it a risk to potential tsunamis as well.

Corina Allen, leader of the School Seismic Safety Project at the Washington Department of Natural Resources, which oversaw the report, also noted that 93% of the schools in the study were given the lowest ranking possible, meaning that there was a high chance of building collapse in multiple spots that could kill or injure occupants.

“There needs to be a number of different modalities for people to choose to either retrofit, or make it easier for them to tear the building down,” Seismologist Bill Steele told MyNorthwest. “If it’s in a historic zone that you really want to preserve, then maybe the public has a role to play in investing in maintaining that resource. One way or another, we need a way to make it possible for privately owned buildings to be retrofit, actually require it, and spread the pain out in a reasonable way.”

Most of the city’s at-risk structures can be found in historic neighborhoods like Capitol Hill, Pioneer Square, the International District, Columbia City and Ballard.