Assessed by our panel of painting experts, the following project was awarded in the program’s “Renovation/Retrofit” category:

Constructed in 1972 and placed on the National Register of Historic Places in 2015, the building is noted to feature a mirrored glass “skin” design element, ubiquitous in corporate architecture witnessed in the 1970s and 1980s. The exterior skin includes flat surfaces of extruded anodized aluminum paneling and glass wrapped around the building's concrete structural system, with thin, shallow, reverse mullion profiles to make the curtain wall appear as one continuous surface. According to the easement, restorations required that any proposed changes conform to nationally recognized preservation standards.

Building restoration and maintenance expert Stuart Dean Co., Inc., took on the assignment of refinishing the building's 40,000-square-foot Class One clear anodized aluminum exterior from the ground floor to the roof – including all window surrounds, window frames, facade panels, soffit panels and turns. 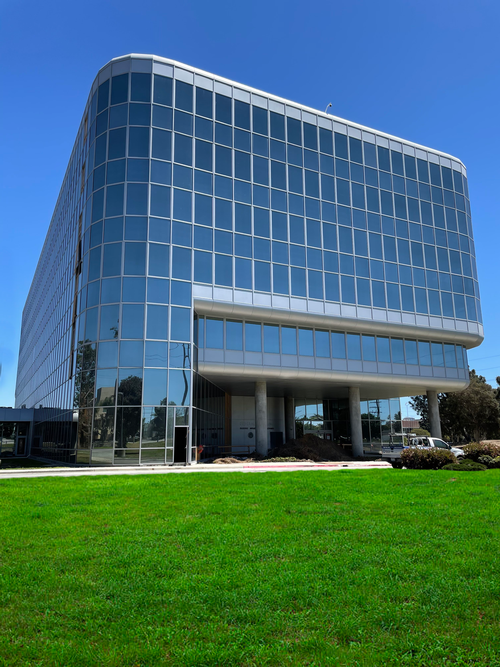 First, Stuart Dean conducted a full NACE inspection of the facade, discovering that the facade was painted several times over the course of its lifetime with a matte, silver-gray aluminum-colored paint. The coating and overcoating resulted in a buildup of 8-13 mils of previously applied paint.

According to Chris Incorvaia, National Manager of Facade Restoration, Stuart Dean, the multiple paint layers had degraded and lost their adhesion, leading to widespread delamination and flaking. The damage was so severe that portions of the underlying aluminum substrate were exposed to the elements and subsequently became corroded and pitted.

“The damage was clearly visible at just a casual glance,” Incorvaia said. “We knew we would need to remove all the previous paint to properly prepare the surface to ensure good adhesion of the coating system.”

To ensure that the Original Design Intent was matched, Stuart Dean worked closely with APV's chemists who engineered a custom-colored, mica-based NeverFade formulation to match the original metallic look. The first layer of the NeverFade Topcoat was then brush-rolled before spray-applying a dusting of the final coat. According to APV, Stuart Dean expedited the coating project, manning it with up to 16 technicians at a time to complete the work in five months.

“The ability of APV's engineering laboratory to create a pigmented coating that emulated clear anodized aluminum was one of the primary reasons the project was approved and awarded to us,” said Incorvaia.

“One of the reasons water-based NeverFade is ideal for these field applications is its ultra-low VOC content and lack of nuisance odors,” Incorvaia continued. “In fact, it is one of very few high-performance coatings to meet strict SCAQMD Rule 1113 environmental regulations in California. And because we were able to brush-roll the primer and first layer of topcoat, we didn't have to worry about overspray or windborne spray damaging surrounding cars or buildings.”

In addition to coating applications, Stuart Dean replaced the previously removed sealants with 100% silicone sealants, which reportedly allow the new coating to adhere properly and provide a 20-30 year service life.

“The successful outcome of this project is due in large part to APV Engineered Coatings’ innovative NeverFade Coatings with Kynar Aquatec,” concluded Incorvaia. “The building owner and project specifier trusted the value, quality and cost-efficient investment of NeverFade Coatings, and the end result is a facade restoration that extends the life of their valuable real estate 20 years or more.”

Corporately located in Long Island City, New York, Stuart Dean Company has been reportedly offering restoration and maintenance services for architectural surfaces since 1932. Be they metal, stone, wood—a facade or decorative fixture, historical or modern—the company works to find the best solution for every project.

Over the years, Stuart Dean established a National Training Center to teach employees vital safety and hazmat regulations. The hands-on education focused in health and safety, equipment, policies and procedures is offered through the company’s Stuart Dean University.