One of the largest infrastructure projects in Croatia was recently coated with corrosion-prevention company Cortec Corporation’s technology.

The Peljesac Bridge is reportedly 2,404 meters (about 7,887 feet) long, connecting Croatia’s Peljesac peninsula with the mainland to bypass a stretch of the Bosnia and Herzegovina coastline.

The project has cost an estimated 550 million euros (about $620 million), with most funding coming from the European Union. The bridge’s designer anticipates that, with the help of Cortec’s corrosion protection, the bridge will have a service life of 130 years.

Contractors specified Cortec’s MCI-2018 product for the job to protect against corrosion and extend the life of the bridge. According to Cortec, MCI-2018 is a 100% silane concrete sealer containing Migrating Corrosion Inhibitors to penetrate concrete and seal surface pores.

MCI-2018 also met the project’s specifications, as the concrete surface pylons needed to be protected with a colorless silane coating. It is water repellant due to chemically reacting with the cementitious substrate and carries CE certification that conforms with the health, safety and environmental protection standards for products in the European Economic Area. 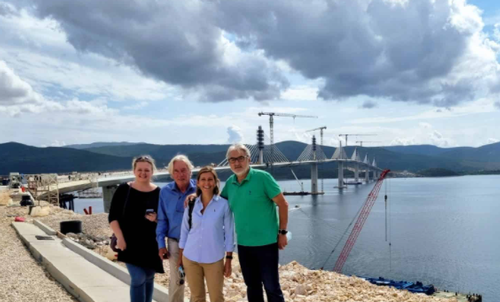 A combination of AC coatings, cathodic protection of steel reinforcement in piles and pile heads, a concrete cover of 65–85-millimeter stainless steel reinforcement and the utilization of MCI-2018 on the concrete surfaces is expected to give the bridge its longer lifespan.

Following application, the bridge will be continuously monitored to examine parameters of structural behavior, time, seismic activity and structural durability.

According to reports, once completed, the Peljesac Bridge will be ranked among the five largest and most attractive European bridges, constructed at the beginning of the 21st century.

“Our MCI technology is used in largest construction projects throughout the globe. I dedicated more than forty years of my life in developing most advanced, environmentally safe corrosion protection solutions,” said Boris Miksic, Cortec CEO and Croatian-American businessman. “Witnessing its application in my home country on this monumental bridge structure is truly a special feeling.

“Croatia has gone through some tough times, having to fight its independence in a war 30 years ago. Seeing it prosper and develop in of the most desirable countries in Europe feels just about right and completion of Peljesac bridge is huge step forward for all of us.”

While historic, the Peljesac Bridge wasn’t met without controversy. The primary point of contention that previously kept the bridge from being built was concern over maritime borders: The government of Bosnia and Herzegovnia (BIH) maintained that the boundary needed to be clearly drawn before work could begin.

In August 2017, before any bridge deal was struck, the Bosniak Member of the Presidency of BIH Bakir Izetbegovic noted that the country did not dispute Croatia’s right to link parts of its territory, but BIH should also not be denied access to the open ocean. At the time, Izetbegovic went on to add that the BIH had maintained this stance since 2007. The Peljesac Bridge project went out for bid in September 2017.

China Road and Bridge Corporation won the bid to work on the project with its 2.08 billion kuna (around $340 million) offering. The E.U. provided 85% of the funding for the 2,000-meter-long (roughly 6,500-foot-long) cable-stayed bridge.

According to Ponting Bridges, the structure’s design features an orthotropic steel deck, with the central part of the bridge being built using a balanced cantilever construction method. Ponting was responsible for preparing the bridge’s preliminary and final design. Construction began in July 2018.

Tomislav Mihotic, State Secretary of the Ministry of Transport, noted that it was imperative that as many Croatian subcontractors as possible remained involved in the project. The maritime boundary issue remained, but no one issued a stop to the project.

Bosnian Serb leader Milorad Dodik announced in October 2018 that he would not greenlight a lawsuit filed by Sarajevo with the International Tribunal for the Law of the Sea. The lawsuit dealt with the construction of the new bridge.

The European Union remained wary of letting state-owned Chinese firms work on the bridge. China Road and Bridge’s proposal undercut the nearest competitor by nearly $100 million, which has led to some legal issues. The European Commission was investigating at the time whether the contract was awarded in line with E.U. rules.

Employment matters were another concern: It remained unclear how many of the jobs would go to locals, as many Chinese state firms bring their own workers for construction projects. It also remained unclear if Croatian officials knew how much workers are being paid.

Euronews reported Croatian Prime Minister Andrej Plenkovi said during a celebratory ceremony that the bridge fulfils a long-time dream to have the Adriatic coastline connected.

"[It represents] a fascinating strategic accomplishment of the Croatian people and their state," Plenkovi added.

Officials expect to complete the bridge and its connecting roads by June 2022, when it will open to the public.