After proposed changes were announced regarding restorations at the Notre Dame Cathedral, critics were reportedly outraged, relating the designs to world-renowned Walt Disney Parks.

“What they are proposing to do to Notre-Dame would never be done to Westminster Abbey or Saint Peter's in Rome,” said Paris-based architect and critic, Maurice Culot. “It's a kind of theme park and very childish and trivial given the grandeur of the place.”

Suggested for most of the interior spaces within the Notre Dame Cathedral—even those claimed to be relatively untouched by the 2019 fire—the new designs are slated offer the space a more tourist-friendly makeover.

However, more damaged elements are still set to be restored to their former state.

According to church officials, the proposed revamp and new designs would serve to better explain Christianity to the landmark’s millions of annual visitors in a more accessible format. The renovation is slated to replace confessional boxes, altars and classical sculptures with modern art murals, new lighting and sound effects. 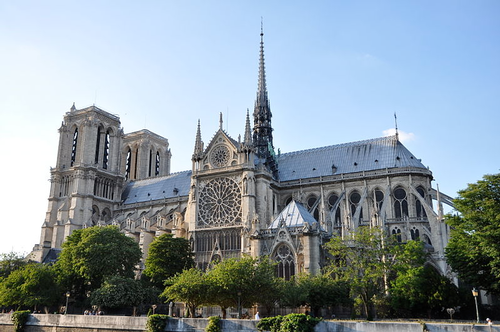 sacratomato_hr, CC-BY-SA-2.0, via Wikimedia Commons
After proposed changes were announced regarding restorations at the Notre Dame Cathedral, critics were reportedly outraged, relating the designs to world-renowned Walt Disney Parks.

The combination of art, light and sound are designed to create what the church calls “emotional spaces.” In addition, the restoration plans also call for the creation of “discovery trails” through themed chapels. Throughout these “trails,” various Bible scriptures would be projected onto the walls in various languages.

After the design proposals were released to the public, many critics were reportedly outraged, much like when new designs were discussed about the landmark’s spire.

“One should simply conduct restoration and not choose solutions that could alter the architectural layout or arbitrarily 'modernize' the edifice,” said Maria Luisa Ceccarelli Lemut, a professor in medieval history at Pisa University.

The French National Heritage and Architecture Commission is slated to hear detailed proposals over the renovation designs sometime this week.

There were no initial reports about what had caused the blaze, though police said at the time that it appeared to be accidental and that the cause could be linked to the ongoing 6-million-euro ($6.8 million) renovations. Since then, though, investigators have said that they believe an electrical short-circuit was the culprit.

On more dense surfaces like granite, workers used a special gel to coat the contaminated surface, which was left to dry for several days and was then removed, pulling out any lead particles that became embedded in the stone.

President Emmanuel Macron has specified that he wants the monument to be rebuilt in time for the 2024 Summer Olympics, slated to be held in Paris. To aid in achieving this goal, digital 3D scans taken by the late Andrew Tallon of New York’s Vassar College in 2015 are believed to provide the necessary information for fast-track construction.

Delays included specialist artisan builders being sent home as France went on lockdown, as well as work being stopped before it began on the removal of the damaged scaffolding.

In June, the scaffolding dismantling process restarted. Two teams of five workers each took turns descending on ropes into the scaffolding, which was made up of 40,000 pieces, and cut with saws through the metal tubes that fused together. The pieces were then lifted out via crane.

At the beginning of this year, new scaffolding was being erected as decontamination and cleaning continued ahead of restoration and rebuilding work.

In September, the French government agency overseeing the reconstruction of France’s Notre Dame Cathedral reported that efforts to secure the structure had reached competition.

Possible design changes for the cathedral’s spire were already being discussed just days after the fire, and French Prime Minister Edouard Philippe even launched a spire design competition, saying that instead of recreating the original spire, the city hoped to create a new design that is “adapted to the techniques and the challenges of our era.”

Farshid Moussavi, the founder of Farshid Moussavi Architecture (London), said that a new opportunity has been presented in bringing together talent and donations to rebuild Notre Dame, much like when the structure was originally built.

However, along with the cleaning update at the beginning of the year, aesthetic debate was still raging when a draft of plans was published in the French media. Some proposals included replacing the historic stained-glass windows in the chapel’s nave with more contemporary ones.

Other significant changes include furniture and different lighting, which prompted immediate dissent from members of the French public—so much so that the Archdiocese of Paris published a press release, restating that the ideas were only a draft with the intention on allowing visitors to better experience the cathedral.

In May, building software firm Autodesk confirmed in a press release that it will be helping Notre Dame Cathedral officials by contributing design and construction solutions to the rebuilding efforts, including BIM support and technical expertise.

According to the company, this partnership allows the conservation and restoration of the cathedral to enable cloud collaboration among stakeholders, making a common data environment that will be the central point for project information.

Some months later, in August, Boston-based Handshouse Studio, on the campus of the Catholic University of America’s School of Architecture and Planning, announced that it was using 800-year-old techniques to reconstruct one of the roof trusses for the structure.

The project is slated for be a “gift” to France.

“We study architectural history through drawings, photographs and onsite observations, but to study an important work of architecture by reconstructing it dramatically expands one's appreciation for the building and the people who created it,” said Mark Ferguson, the dean of Catholic University’s School of Architecture and Planning, whose students will be involved in the project. “[It] will bring people together from all walks of life to experience the joy and hard work of crafting a beautiful building.”

At the time of the announcement, all of the burned timber was reported to have been removed from the cathedral and scaffolding installation was completed.