In a new comprehensive report released by the New York City Department of Buildings, the city contemplated the use of unmanned aircraft systems for facade and safety inspections throughout the area.

According to reports, current legal use of drones in New York City is restricted only to approved government agencies in response to specific emergency response situations. Due to these restrictions, in order for the DOB to use drones commercially, new legislation from the City Council would be required to amend the New York City Administrative Code.

For its study, the DOB investigated how the regulatory landscape could affect drone use in the city, the use of drones in other jurisdictions and how drones could potentially be used for building facade inspections within the five boroughs.

The report also considered the capabilities of drones in the context of mandatory facade inspections under the City’s existing Facade Inspection & Safety Program (FISP).

“It is imperative that we continue to embrace the latest technologies and innovations in support of our mission to protect our fellow New Yorkers,” said Buildings Commissioner Melanie E. La Rocca. “Our report is the product of intensive research by DOB experts, and finds that when combined with traditional hands-on examinations, the effective use of drones could potentially result in more comprehensive building inspections, resulting in reduced inefficiencies and a safer New York City.”

In its report, the DOB found that when used in conjunction with up-close, hands-on examinations, the use of unmanned aircraft systems could potentially have application for facade inspections in that the technology would provide additional information to the Qualified Exterior Wall Inspector. 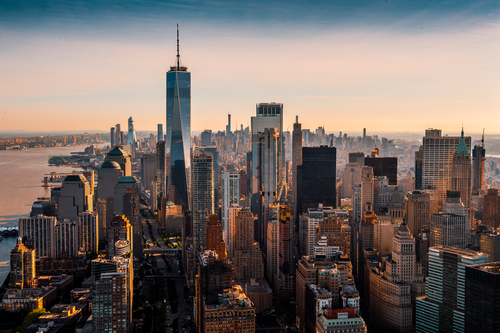 EXTREME-PHOTOGRAPHER / Getty Images
In a new comprehensive report released by the New York City Department of Buildings, the city contemplated the use of unmanned aircraft systems for facade and safety inspections throughout the area.

Ideally, the drones would be utilized to collect significant amounts of visual data such as photographs, videos and thermal imaging. However, the DOB believes that the drones could also be used to capture more difficult images of building angles for large building inspections.

“As Chair of the New York City Council's Committee on Technology, I know that we must always be moving forward with using the best technology to promote the safety and durability of our buildings,” said Council Member Robert Holden. “The use of drones to inspect buildings could yield more detailed results and greater safety, as well as greater efficiency and documentation. It's well worth pursuing.”

The DOB reports that it will be continuing its research into drone use, accompanying technologies and how the unmanned aircraft systems could be safely employed by its professionals as it believes the combination of emerging technology could improve the efficiency and safety of required building inspections.

In addition, further studies could also offer a glimpse into how drones can be safely operated for broader commercial use in a dense city environment. The City reports that it plans to look into additional rules and specific guidelines it would need to implement if drones were used to help maintain public safety in the future.

“Building technology is developing faster than it has in a century,” said Carlo A. Scissura, President and CEO of the New York Building Congress. “We’re seeing drones, artificial intelligence and other innovations make design and construction more efficient, stronger and safer.

“New York City has always been innovative, but our outdated codes and rules have left us behind while other cities benefit from cutting-edge technologies. With this report, the Department of Buildings has taken a major step forward for New York to catch up. Our hope is that the incoming City Council will act swiftly to enable the use of drones for facade inspections, making the process safer and more efficient.”

Drones in the Industry

Surface Corrosion Consultants (Belfast, Ireland) announced its latest investment into unmanned aerial vehicles for monitoring and inspecting corrosion for its clients across the United Kingdom and much of Europe over the summer.

Recently, the technology has shown more popularity as the preferred technique for coating inspections across a wide range of sectors including oil and gas, construction, renewables, marine, industrial, transportation and other forms of infrastructure.

This uptick can be mostly attributed to the UAV’s capabilities in that it is the safest alternative to any manned inspection survey method and using them on an asset reduces the risks associated with human surveying as inspectors are removed from potentially dangerous and hostile conditions such as height, weather and radiation.

Additional benefits of UAV inspections include cost savings as the surveys can be carried out whilst an asset is still operational, reducing any costs associated with isolating an area or shutting down an entire asset. Further cost savings are achieved as companies no longer require a manual process such as rope access technicians, mobile elevating work platforms or scaffolds.

The new service, Surface reports, will be combined with the company’s in-house digital solution, Surface Asset Management, which digitally streamlines all aspects of coating and NDT inspection to simplify the surface asset management process. SAM can also generate immediate survey reports as the UAV is in mid-flight, removing the need for manual data input.

According to the company, the new service will offer long-term solutions such as reduced overheads and operations costs, as well as a host of health and safety benefits compared with the traditional manual inspection survey methods.

Last year, in March, global coatings firm AkzoNobel released an update on its partnership with Apellix, a Jacksonville, Florida, start-up that won the 2019 Paint the Future challenge. The duo was reportedly collaborating on a computer-controlled spray-painting drone.

The application aims for benefits such as reduced application time and less waste, as well as increases safety.

That same year, in November, the Federal Aviation Administration announced the launch of a new program called BEYOND following the completion of its three-year Unmanned Aircraft System Integration Pilot Program.

The new initiative is slated to continue the partnerships and progress it made under the IPP and will continue to address remaining challenges currently keeping unmanned aircraft systems from being fully integrated into the national airspace system.