US Tariffs Doubled on Canadian Lumber

At the end of November, the U.S. Department of Commerce was reported to have officially increased tariffs on antidumping and countervailing duties on Canadian softwood lumber imports.

Implemented by the Biden Administration, the increase nearly doubles the import rate from 8.99% during the Trump Administration to 17.99%. Although the measure is hearing much backlash from industry associations, U.S. lumber producers were reported to be in favor of the stiffer penalties.

“The U.S. Lumber Coalition strongly urges the administration to continue full trade law enforcement,” said Jason Brochu, Chairman of the U.S. Lumber Coalition and Co-President of Pleasant River Lumber Co. “More U.S. lumber being produced in America to meet domestic demand is a direct result of the enforcement. A level playing field is critical for the continued investment and growth of the domestic lumber industry and its hundreds of thousands of workers and thousands of communities across the United States.”

After additional studies over the summer, the Commerce Dept. landed on the 17.99% final. 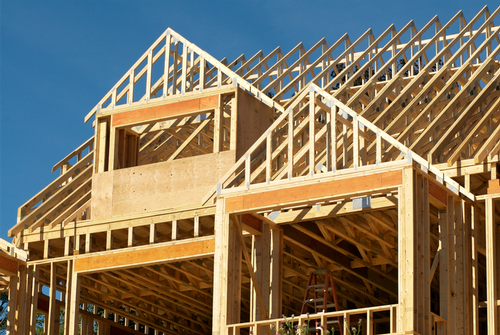 © iStock.com / ArtBoyMB
At the end of November, the U.S. Department of Commerce was reported to have officially increased tariffs on antidumping and countervailing duties on Canadian softwood lumber imports.

Members of the Canadian government were not pleased about the tariff hike. Mary Ng, Canada's Minister of International Trade was quoted in a statement saying, “These unjustified duties harm Canadian communities, businesses and workers. They are also a tax on U.S. consumers, raising the costs of housing, renovations and rentals at a time when housing affordability is already a significant concern for many.”

While it is believed that homebuilding customers will be hit the hardest, the new tariffs are also expected to negatively affect contractors building commercial and other structures in both countries as its economy works to recover from the COVID-19 pandemic.

“As U.S. producers remain unable to meet domestic demand, these duties are a threat to post-pandemic recovery on both sides of the border,” said Susan Yurkovich, President of the British Columbia Lumber Trade Council. “Our strong hope is that the U.S. industry will end this decades-long litigation and instead work with us to meet demand for the low-carbon wood products the world wants, including American families.”

As aforementioned, it isn’t just Canadian government officials outraged by the tariff, but those in the industry in the U.S. as well.

Ken Simonson, Chief Economist for the Associated General Contractors of America, added, “While lumber is much more important to single-family construction than multifamily, it is a significant cost element for many projects, such a remodeling projects and decks or other additions to restaurants.

“A doubling of this tariff will only prolong the extreme price increases that have hit lumber repeatedly over the past 18 months.”

National Association of Home Builders Chairman Chuck Fowke also issued a statement on behalf of the NAHB, saying, “With the nation in the midst of a housing affordability crisis, the Biden administration has moved to slap a huge, unwanted tax hike on American home buyers and renters by doubling the tariffs on Canadian lumber shipments into the U.S.

“This is the worst time to add needless housing costs onto the backs of hardworking American families. Home builders are grappling with lumber and other building material supply chain bottlenecks that are raising construction costs.”

Over the course of 2021, lumber prices were reported to have already witnessed record-high levels. According to reports, the top five North American lumber producers saw profits jump by over 2,000% between the second quarter of 2020 and 2021.

By the third quarter, however, lumber prices recovered—although remaining at record-high levels due to do-it-yourselfers and strong homebuilding outlooks.

According to an analysis of the U.S. Bureau of Labor Statistics’ Producer Price Index data by the Associated Builders and Contractors, construction input prices witnessed an increase of 1.5% in October. In looking at specific materials, steel mill product prices have increased 141.6% since October 2020, while iron and steel prices are up 101.5%. Softwood lumber prices, which surged during the pandemic, were down 19.5% from the same time last year.

In looking at prices from month to month, softwood lumber increased from September to October by 7.3%. The Associated General Contractors of America reported that the increased input costs are beginning to have a trickle effect, in that the prices of construction projects are also on the rise.

With that in mind, also in October, the U.S. Census Bureau and the U.S. Department of Housing and Urban Development revealed that the industry witnessed a rebound in home construction.

According to the report, residential construction in August showed a seasonally adjusted annual rate of 1.62 million units, 17.4% above the pace of a year ago. The rebound is mostly attributed to a 21.6% jump in construction of apartment units, which was reported to have offset a 2.8% fall in single-family construction.

Another sign that residential construction could stay on the rise, the report suggests, is that applications for building permits saw a 6% increase, reaching a seasonally adjusted annual rate of 1.73 million units. Construction was also reported to be up across the nation, except in Western states.

This was the first time the MPI had been over 50 in seven quarters.

Also this quarter, though, the report introduced the MOI, which replaced the Multifamily Vacancy Index. The MOI measures the multifamily housing industry’s perception of occupancies in existing apartments. It is a weighted average of current occupancy indexes for class A, B and C multifamily units and can vary from 0 to 100, with a break-even point at 50, where higher numbers indicate increased occupancy. With a reading of 59, the MOI has improved over the last three quarters.