Assessed by our panel of painting experts, the following project was awarded in the program’s “Exteriors, Commercial + Public Buildings” category:

When officials from the Bellefontaine Neighbors Community Center in St. Louis decided that its outdoor pool needed an upgrade, they hired local painting contractor Bazan Painting for the job. According to Bazan, the existing surface of the pool was PebbleTec plaster and had begun to show signs of delamination and chip ups throughout the majority of the pool. 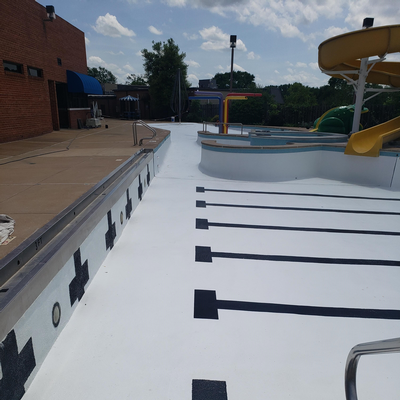 All photos courtesy of Eric Hellwig
In its fifth year, Technology Publishing Co.’s commercial honors program, The Elevation Awards, expanded its reach by partnering with the Commercial Painting Industry Association.

In restoring the structure, Bazan started by first identifying hollow areas in the pool and demolition of the failing plasters. This was followed by demolition with jackhammers and various demolition tools and hammers. Once the existing pool surface was removed, Bazan crews squared up the areas using a concrete saw so that proper repairs could be made to the mortar.

The product of choice to make these repairs was Tnemec 217 Mortarcrete, which required 160 kits to fill in all of the voids in the pool surface. After filling all of the voids, extensive grinding of the patched surfaces was required to smooth out these areas prior to coatings applications.

The pool was coated with three coats of Tnemec 161 Tneme-Fascure epoxy.

Bazan crews reported that one challenge in the project was that not all of the PebbleTec surface was able to be removed, which meant that the texture of the patched areas and the existing PebbleTec were significantly different. To solve this issue, the team broadcasted washed silica sand into the coating so that the texture would blend more naturally and hide the extensive patching that was required.

This process was done to the entire shallow area of the competition side of the pool.

Another challenge faced by the team were the existing expansion joints in the pool. Because most of the PebbleTec was failing at these areas, the expansion joints had to be completely recut and then filled with a Sika Duoflex NS polysulfide sealant.

On these issues, 2021 Elevation Awards Judge Kenneth A. Trimber, PCS, Former President of KTA-Tator Inc. said, “Not a large project, but interesting discussion of the challenges faced with repair of plaster in the pool, matching texture and recutting expansions.”

The final step to complete the project was to repaint all of the pool lane lines and wall targets, which was done using Tnemec 161 Tneme-Fascure.

Based out of St. Louis, Bazan Painting opened in 1977 and has been providing full-service painting and decorating contractor services across the country. Reported to take on commercial, industrial, institutional and residential projects, the company notes that it specializes in sandblasting, water blasting, power washing, corrosion prevention and concrete floor polishing.

“We have been working with Bazan Painting Company for over 20 years now and we have found them to be an excellent partner in all of the projects. One of the things that makes Bazan a great team member is that no matter the size of the project Bazan is always there ready to perform at a consistently high level,” said Rob Malone, Malone Building Solutions.

“Their quality of work is some of the best in the industry and their pricing is very competitive. Beyond all of that, the main reason we have kept Bazan on our team for 20 plus years is accountability; Bazan is accountable for their people and whenever there is an issue Bazan always rises to the occasion and brings equitable resolution and satisfaction.”