To achieve this goal, project designers have narrowed the width of the viaduct by over one meter (roughly three feet) to decrease the amount of concrete and steel used. The northbound and southbound tracks will also be closer together, reportedly reducing the amount of earthworks needed for the approach embankment.

“By providing a cleaner, greener way to travel, HS2 will help cut the number of cars and lorries on our roads, cut demand for domestic flights and help the fight against climate change,” said Billy Ahluwalia, HS2 Senior Project Manager.

“But we’re also serious about reducing the amount of carbon we use during construction, and the Colne Valley Viaduct is a great example of how we’re using the latest engineering techniques to do just that. Concrete is one of our industries’ biggest sources of embedded carbon – and this design will help us cut our carbon footprint while delivering a lighter, stronger and more elegant structure.” 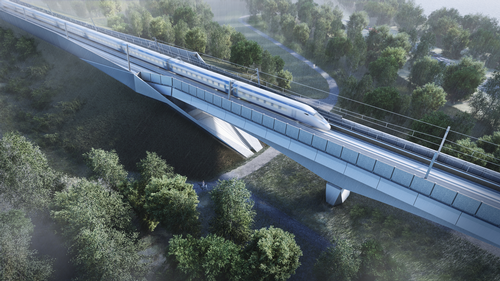 HS2
Officials for the United Kingdom’s High Speed 2 project recently confirmed that it is on track to cut the amount of embedded carbon in the railway’s Colne Valley Viaduct by 28.4%.

Created to meet the U.K.’s low-carbon transport future, the project also aims to further connect rail capacity across the country and rebalance the country’s economy. Once completed, the rail line is slated to serve over 25 stations, including eight of Britain’s 10 largest cities and connecting around 30 million people.

The construction of the new railway is split into three phases:

Over the course of Phase One, rails plan to link London and the West Midlands through 140 miles of dedicated track. According to HS2, the rail will pass through more than 32 miles of tunnels and over 10 miles of viaducts. This portion of the project is estimated to cost between 35 billion and 45 billion pounds (between $45 billion and $58 billion) and hopes to open between 2029 and 2033.

During Phase Two (A), a line will be installed between Fradley in the West Midlands and Crewe in Cheshire, from which it’ll  connect with existing high speed services to carry passengers between London and Crewe.

At the time, HS2 added that the government was drawing-up an integrated rail plan for the North and Midlands, to identify the most effective sequencing of relevant investments and how to integrate HS2, Northern Powerhouse Rail and other rail investments. This plan will be informed by an assessment of the rail needs of the Midlands and the north undertaken by the National Infrastructure Commission.

In September 2020, Prime Minister Boris Johnson visited the Midlands site to mark the official start of construction for the HS2 project, and a further two bridges were nearing completion. Over 200 people were involved in this construction site, contributing to supporting jobs in the region.

Project crews reportedly installed the second of four bridges at its new Interchange Station in 45 minutes in November last year. Installed over the A446 in Solihull, England, the modular bridge measures 45 meters long (roughly 148 feet) and weighs 914 tons.

According to reports about the construction milestone, the installed bridge was designed in a virtual world using a Design for Manufacture and Assembly (DfMA) strategy. After designs were approved, Durham-based Cleveland Bridge manufactured the infrastructure and supplied 220 tons of steel girders for the project. Offsite manufacturing company and specialist engineering contractor Expanded (Nottinghamshire, England) was also reported to have supplied 80 precast concrete modular abutment blocks.

When it was time to move the structure into place, O’Rourke and J. Murphy & Sons Joint Venture led the installation. The high-tech portion of the installation process involving various engineering and environmental services was supported by design joint venture WSP and Ramboll.

Using a 128-wheel hydraulic platform to move the bridge span, the infrastructure was moved 150 meters and lowered onto the DfMA abutment shells in all of 45 minutes. According to HS2’s delivery director David Bennett, the endeavor allowed for the bridge to reopen 24 hours ahead of schedule, adding that the M42 bridge installed in August 2020, was also completed ahead of schedule.

In August, the joint venture working on the $147 billion high-speed rail system, announced plans to use 3D-printed concrete on the project. The team—composed of Skanska, U.K. civil contractor Costain and Austrian contractor Strabag—plan to print concrete structures onsite utilizing the technology.

Dubbed “printfrastructure,” the 3D-printing technology was slated for testing by the Skanska Costain STRABAG JV on the HS2.

According to a press release issued by Skanska earlier this year, by printing structures onsite of the 330-mile-long rail project could cut emissions in half in comparison to traditional shipping and prefabricated methods or mixing and pouring on location.

In addition to the technology’s low carbon, quick drying properties, the 3D concrete printing will also be able to be utilized in physically restricted areas, depleting the need to develop expensive logistical plans.

The innovative technology is slated have its first test deployment in spring 2022.

The Colne Valley Viaduct, inspired by “the flight of a stone skimming over the surface of the water,” will run 3.4 kilometers (about 2.1 miles) across and 10 meters (about 32 feet) above lakes near London, the West Midlands and Crewe.

“Conscious of commitments made to the community about the appearance of the viaduct as it passed over the lakes, the team focused on creating long graceful arches over the water while reserving simpler, easier to construct, designs for the approaches,” states the press release. “Inside the viaduct, the engineers opted for a ‘post-tension’ design, with lightweight super-strong steel cables running the full length of structure.”

These cables will be monitored by a network of sensors around the clock to allow the bridge to handle trains passing at speeds of up to 200 mph.

“In designing the viaduct we have had to address the challenges of not only building a structure capable of handling the huge forces that will be exerted on it from high speed trains operating in both directions, but also to meet the demands of local stakeholders, creating a design that not only makes a positive statement, demonstrating world class engineering, but also really works within the environment in which it is placed,” said Alan Price, Align Design Director.

“Working through the design process and using the original specimen design as a starting point, we have been able to deliver not only an iconic design but also a significant reduction in CO2 required to build the viaduct. This is not only a significant achievement for all those involved, but also for the environment.”

The Align JV contracting team also looked at the viaduct’s noise barriers to reduce carbon use, opting to use composite with noise absorption steel cassettes and transparent acrylic instead of solid concrete. HS2 reports that test piling was completed at the start of construction to aid in the design, resulting in a 10-15% reduction in the depths of the piles and associated time, cost and carbon savings.

According to HS2, the first of 292 concrete piles was sunk into the ground earlier this year to start the viaduct’s foundation. Holes up to 55 meters (about 180 feet) are bored prior to being backfilled for the piles instead of hammering. A concrete cap will be placed on top of each pile to support the weight of the structure.

HS2 expects to assemble sections of the main deck, which is being built at a temporary factory nearby, from north to south starting in 2022.