Groundbreaking Held for $1.3B CA Hospital

Last week, officials and community leaders hosted a groundbreaking ceremony for what’s to be a new, state-of-the-art medical complex at the University of California, Irvine.

“The new UCI Medical Center—Irvine will be a full-service academic medical complex, bringing a broad range of the most advanced healthcare services to coastal and southern Orange County, including access to the hundreds of clinical trials underway at UCI Health,” said UCI Health Chief Executive Chad T. Lefteris.

According to reports, the project is a collaboration between UCI and UCI Health which will encompass some 800,000 square feet and reportedly cost $1.3 billion. Hensel Phelps and CO Architects will be working as the project’s design-build team.

“Of all the things we do at UCI, all the myriad ways our community is served, none are more important than the activities of our academic health center,” said UCI Chancellor Howard Gillman at the groundbreaking ceremony. “People come to us when they are at their most vulnerable, they turn to us to make their lives better and the outcomes of our efforts have the greatest effect on those lives.” 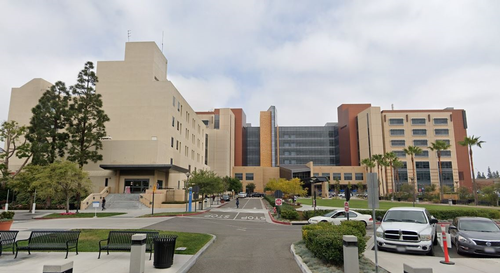 © Google, Inc. 2021
Last week, officials and community leaders hosted a groundbreaking ceremony for what’s to be a new, state-of-the-art medical complex at the University of California, Irvine.

Of the new developments, the new health center plans to host:

The Los Angeles Times reports that the addition of the Chao Family Comprehensive Cancer Center and Ambulatory Care will serve as the country’s only National Cancer Center Institute-designated cancer center.

A hematopoietic stem cell and bone marrow transplant program will also be located at the new facility.

“Today we mark a milestone in the history of UCI, of the history of Irvine and of anywhere in our region where people need the world-class care that is provided only by an academic health center,” Gillman said.

Prior to the groundbreaking, the city reportedly expressed concerns over the project’s potential impacts of traffic and construction. To mitigate these issues and put a halt to any legal action, it was decided by UCI that the university would pay an additional $6.5 million for roadway, bike lanes and sidewalk projects aimed at reducing congestion around the medical center and UCI campus.

UCI Health spokesperson John Murray reports that the project is being funded through hospital reserves, external financing and supporters. The facility is expected to open sometime in 2025, however, some of the advanced care and children’s facilities could open two years earlier, in 2023.

Earlier this year, the St. Jude Children’s Research Hospital announced plans for a $1.9 billion overhaul of its Memphis, Tennessee location. The project involves various renovations, new construction and capital investments, and is part of an even larger $11.5 billion expansion, which will span over six years and involves new research into treatments of catastrophic childhood diseases.

Reported to be the hospital’s largest strategic expansion in its nearly 60-year history, St. Jude’s Board of Governors adopted the six-year plan in March. The full expansion is expected to be paid for by donors and requires no debt, although, the responsibility ultimately falls on the American Lebanese Syrian Associated Charities (ALSAC).

In partnering with more than 11 million active donors, it is projected that 87% of funds for the project will come from public donations and investment income. Last year, the average donation was approximately $43.

In breaking down the $1.9 billion budget that will stretch from 2022-27, $1.4 billion will be put into “strategic initiatives” while $558 million in capital investments will be put into current facilities on the Memphis campus.

The largest project in the plan is the construction of a new $500 million outpatient clinic and attached doctors’ office buildings. Additionally, two new parking garages will be constructed, and existing cafeteria facilities plan to be expanded.

Another large part of the plan involves the construction of Domino’s Village, which is a $100 million housing complex specifically for St. Jude patients and families. The village is already under construction and includes 140 units, a mixture of long- and short-term residencies, an underground parking garage and exterior courtyard and play area.

Apart from construction, other plan highlights include:

As a result of the expansion, St. Jude plans to add 1,400 employees, with 70 of them being faculty positions. The hospital also plans to hire a new vice president to direct capital planning and facilities management within the first six months of the 2022 project launch.

In Philadelphia, crews worked around the clock to open the University of Pennsylvania Health System’s (Penn Medicine) Pavilion. The $1.5 billion, 17-story, 1.5 million-square-foot hospital was slated to open in April 2020—15 months ahead of schedule.

That same month, it was reported in Miami that a temporary hospital had been constructed within the Miami Beach Convention Center days before its target opening. The 450-bed hospital was constructed as part of the U.S. Army Corps of Engineers efforts to alleviate pressure on local hospitals from anticipated surges in COVID-19 patients.

In terms of utilities, the temp structure required plumbing and sprinklers were run from the main hospital into the parking lot. New incoming primary power with a stepdown transformer was also provided to power the tents. Life safety provisions were installed including a fire alarm, sprinkler, fire extinguishers and other systems.

Aecom was awarded the contract with the New York City Department of Design and Construction on March 31, 2020. While the financials of the deal were not disclosed, Aecom provided construction management, emergency engineering and grant management services for the project.