For this project, located at the Guardian Angel Autism Rehabilitation Center, more than 40 volunteers from PPG’s Tianjin site worked together for nearly 150 hours revitalizing and beautifying the center’s interior. According to reports, the Guardian Angel Autism Rehabilitation Center cares for nearly 20 autistic children and was established in 2011.

“It is quite meaningful to participate in this Colorful Communities project,” said Michael Fu, PPG Operations Manager, Tianjin plant. “We are very pleased to witness the changes brought to the rehabilitation center with our products and our own hands. We hope our volunteer service can let the children see the hope and light of life.” 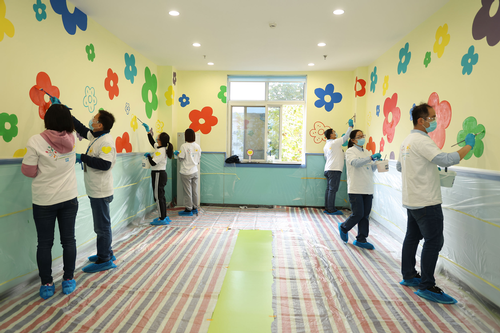 Completed in a theme PPG calls “love and security,” the crews refinished the center’s lobby, multi-function room, reading corner, music classroom, gym and other interior spaces. The design, which focused on natural scenes, included sky and clouds painted on ceilings and walls to create a sense of three-dimensional immersion.

“We are grateful to PPG for assisting in beautifying our campus,” said Wang Xiaoyin, Director, Guardian Angel Autism Rehabilitation Center. “‘Because they have trouble communicating with the outside world, autistic children need more attention and care from society. PPG has renovated the rehabilitation center with bright colors, allowing the children to visually explore a different world.”

“As a member of the community, we want to increase the attention to and care for autistic children in life, education and employment,” said Cathy Yan, PPG General Manager, Corporate and Government Affairs, Asia Pacific. “PPG hopes to build a bridge of understanding for these children and others through the Colorful Communities project.”

The Colorful Communities program provides PPG volunteers and products, along with financial contributions, to bring color and vitality to communities where the company operates around the world, such as in Tianjin, where PPG has a production facility and global coatings innovation center.

In August, PPG announced the completion of another Colorful Communities project in Tianjin, this time at the TEDA Nursery School.

Established in 1999, the TEDA Nursery School is a local kindergarten of almost 400 students that offers health and arts education. Due to the school’s coastal location, its exterior walls were stained and faded from the sea breeze.

For the project, PPG brought together nearly 30 volunteers for almost 60 hours. Completed in cooperation with the TEDA Charity Association, PPG was reported to have provided more than $50,000 to assist with the project and 93 gallons of its Seigneurie exterior paint.

Featuring an orange tone and a minimalist design, the refurbishing project used different saturations of colors to echo the orange hue of the original exterior walls and achieve an integration of colors. With this decision, combined with the building’s round corners, PPG reports the structure’s exterior walls now resemble a book, suggesting opening a new chapter for a bright future for the children.

For the MEF project in particular, roughly 50 PPG volunteers spent 200 hours beautifying the public shelter, which cares for children ages 8 to 13 placed by the child welfare system. The shelter is managed by Etablissement Public Départemental pour Soutenir, Accompagner et Eduquer.

To support the project, PPG contributed $60,000, including 66 gallons of Peintures Gauthier paint by PPG. The company further reported that Bleu Oman, a bright blue hue, was used in the bedrooms to promote sweet dreams, while Jaune Klee, a vibrant yellow, was applied to the building’s hallways.

Since last year, the PPG Charity Partner program has organized dozens of fundraising activities to support MEF, including selling raffle tickets and honey from beehives installed at their sites. Employees have also collected material donations, such as toys, puzzles, books and clothing for children. In addition, PPG provided direct funding for 16 computers as well as printers and webcams for MEF units in Artres and Condé-sur-l'Escaut as part of its COVID-19 relief efforts.

And in the spring, PPG announced the completion of a Colorful Communities project at the Yuhong Primary School in the Jiading District of Shanghai, China.

The Yuhong Primary School educates more than 170 students with a staff of 10 teachers. According to PPG, the school’s beautification is a step to create a colorful and engaging environment for the children.

The renovation brought together 30 volunteers from the PPG Jiading plant, who spent more than 70 hours working on the school’s walls. The company provided more than $45,000 to assist with the project, including 195 gallons of Seigneurie exterior paint by PPG. (The company also donated books, teaching aids and COVID-19 control and prevention supplies.)

Colors used for the project are from the “Be Well” 2021 Palette of the Year, which aims to represent optimism and nostalgia. The use of green as the primary color aims to represent new beginnings and the freshness of spring.

The company notes that, since 2015, PPG has completed 330 Colorful Communities projects, impacting more than 6.7 million people in 42 countries.