The contracts are reportedly firm-fixed-price, indefinite-delivery/indefinite-quantity, multiple-award construction contracts (MACC) with a combined maximum value of $8 billion. According to the U.S. Department of Defense release, a minimum guarantee of $2 million will be awarded to each of the five contract recipients:

"It involves industry partners in our planning efforts, a lesson we learned from our SIOP efforts to date. This will facilitate healthy competition and, ultimately, help us deliver the best solution we can for our Navy and our Nation." 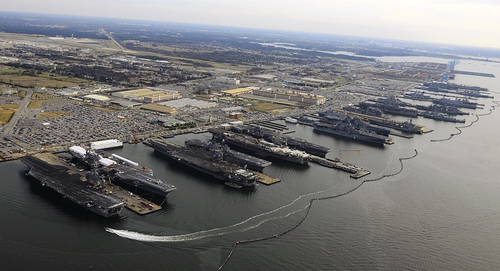 SIOP, established in 2018, is a joint effort between NAVFAC, Naval Sea Systems Command, Commander and Navy Installations Command to “recapitalize and modernize the infrastructure at the Navy's four public shipyards, including repairing and modernizing dry docks, recapitalizing and reconfiguring shipyard facilities and modernizing the shipyards' industrial plant equipment.”

According to the NAVFAC, the companies may compete for future tasks for preconstruction planning, preparation and constructability reviews for waterfront facilities, as well as dredging and incidental design, environmental and other services related to SIOP.

The DOD reports that work will primarily be performed within the NAVFAC Pacific area:

"The Navy depends on our shipyards returning combat-ready ships and submarines to the fleet,” said Korka. "SIOP guides the Navy's investment plan to achieve that. It's a once-in-a-century effort that the NAVFAC team is proud to be part of."

The contracts are primarily funded by 2022 fiscal military construction funds and will not expire at the end of the fiscal year. Six proposals were reportedly received for the project.

The DOD expects the projects to be completed by November 2029.

At the end of August, the Naval Facilities Engineering Systems Command announced that it had awarded eight different companies spots on a $950 million contract to support large construction projects for the Mid-Atlantic region.

The projects are slated to take place in Hampton Roads, Virginia, over a base period of five years, although the contracts do have four potential one-year option periods.

According to the Department of Defense, contractors can offer design-build and design-bid-build services to demolish, repair or modify facilities.

S.B. Ballard Construction Co. has been awarded the initial task order at $51.6 million for the corrosion control and paint facility at Naval Station Norfolk. Fiscal 2020 and 2021 military construction contract funds in the amount of $51.6 million have been obligated for this award, specifically, and will not expire at the end of the current fiscal year.

All work for the task order has a target competition of March 2024.

Other design-build and design-bid-build projects will involve, but are not limited to, new construction, demolition, repair, alteration and renovation of buildings, systems and infrastructure and may include civil, structural, mechanical, electrical, fire protection and communication systems.

The DoD reports that while lead or asbestos abatement may be required, that work in explosive facilities and/or sites could also be required. Fiscal 2021 operation and maintenance contract funds in the amount of $35,000 have been made for the seven minimum guarantee task order awards and are not expected to expire at the end of the current fiscal year.

The term of the contract is not to exceed 60 months, with an expected completion of August 2026.

Future task orders are slated to be funded primarily by operation and maintenance and military construction funding.