Nearly 200 countries met at the 26th United Nations Climate Change Conference of the Parties earlier this month, to develop plans to meet emissions goals and accelerate action on climate by 2030. COP26 was held from Oct. 31-Nov. 13 in Glasgow, Scotland, with leaders planning to discuss goals of the Paris Agreement and the UN Framework Convention on Climate Change.

“It’s time to go into emergency mode, or our chance of reaching net-zero will itself be zero,” said UN Secretary General Antonio Guterres. “I reaffirm my conviction that we must end fossil fuel subsidies, phase out coal, put a price on carbon, build resilience in vulnerable communities against the here-and-now impacts of climate change… We did not achieve these goals at this conference. But we have some building blocks for progress.

“It is an important step but is not enough. We must accelerate climate action to keep alive the goal of limiting global temperature rise to 1.5 degrees.”

The Breakthrough Agenda was launched at COP26, a commitment to work together to develop and implement clean technologies that are “essential to meeting the Paris Agreement goals.” The breakthroughs focus on the power, road transport, steel and hydrogen industries: 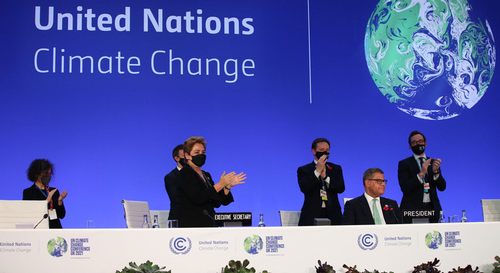 “The benefits of this Agenda go beyond tackling climate change alone,” stated the release. “Our ambition is to catalyze the growth of markets, jobs and economic development globally for clean technologies and sustainable solutions, support the achievement of the UN Sustainable Development Goals, strengthen the climate resilience of our societies and realize multiple cobenefits such as cleaner air, water and better health.”

Leaders also announced the Glasgow Climate Pact, which recognizes the urgent need to address climate change and strengthen climate action, acknowledges the impacts of the pandemic and notes the importance of all ecosystems and the role of communities in response to climate change. The document outlines key points in:

“After the collective dedication which has delivered the Glasgow Climate Pact, our work here cannot be wasted. The drive towards 1.5, for a cleaner, healthier, more prosperous and more resilient world must continue,” said COP26 Presiden Alok Sharma at the conference’s closing ceremony.

“And we must continue that together. At the start of this summit the world was asking, ‘do the parties assembled here in Glasgow have the courage to rise to the scale of the challenge?’ My friends, you have responded. We have responded.

“History has been made here in Glasgow. We must now ensure that the next chapter charts the success of the commitments we have solemnly made together in the Glasgow Climate Pact.”

In an article published in Nature Reviews Materials prior to the conference, researchers stated that the Climate Clock predicts at the time of writing that there are just under 7 years and 282 days to achieve zero greenhouse gas emissions. Under the Paris Agreement, countries must update their emissions targets every five years to keep the 1.5 C threshold.

COP26 itself was reportedly a carbon-neutral conference, located at a venue that won the Green Tourism award. The convention reportedly brought together about 50,000 online and in-person participants.

COP27 is set to take place in Egypt next year.

In a recent press release, the British Coatings Federation (BCF) announced that it had joined other sectors in pledging to achieve net zero carbon emissions by 2050.

At the time of the late October announcement, BCF also reported that it would be committing to new targets for its paint recycling scheme, PaintCare. The ambitious new target calls for increasing the percentage leftover paint reused, recycled or remanufactured from the current 2% to 75% by 2030.

The recent commitments were made at a BCF Board of Directors meeting in Manchester and are slated to be backed by more detailed Net Zero Roadmaps for each BCF sector.

“With the 26th United Nations Climate Change Conference (or COP26 for short) fast approaching, there has rightly been an increased focus on sustainable action, but our sector has been continuously working on improving key sustainability metrics for over 25 years,” said Tom Bowtell, CEO of BCF.

“I’m delighted the BCF Board has set ambitious targets for both Net Zero and leftover paint recycling, and we will be working hard with our members in the next 12 months to ensure a clear roadmap to achieve both objectives is in place.”