Northern Petrochemical Corporation and the Municipal District of Greenview in Canada have recently announced they have signed a land sale agreement for construction of a $2.5 billion carbon-neutral production facility.

The 295-acre site in Grande Prairie, Alberta, is located within the Greenview Industrial Gateway. NPC said they plan to produce natural gas to blue methanol and blue ammonia at the facility based on financing and approvals.

“The announcement of this huge new job-creating project adds even more momentum to Alberta’s exciting economic recovery,” said Jason Kenney, Premier of Alberta. “Northern Petrochemical’s decision to invest $2.5 billion in ammonia and methanol production shows that Alberta’s natural gas vision and our bold petrochemical strategy is working to create jobs while diversifying our economy, and ensuring a future for our resource industries.”

According to the City of Alberta, the facility would be the first of its kind in Canada, with plans to use carbon capture and storage to produce exceptionally low-carbon products that can be used in the energy, agriculture and chemical industries.

“There are exciting times ahead,” said NPCC CEO Geoff Bury. “With the low cost of this natural gas feedstock, the opportunities for carbon sequestration, the proximity of process water, rail access; The Greenview Industrial Gateway has a lot to offer. The GIG has everything needed to compete on the world stage.” 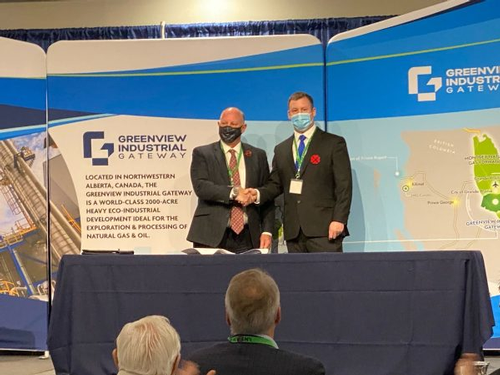 The Greenview Industrial Gateway is a planned industrial sector that provides services to companies such as carbon capture, utilization and story, transportation by rail and access to significant natural gas feedstocks.

“Processing natural gas to carbon-neutral value-added products at the source is the right path to lower overall emissions in the future. This project might be based on industry, but with the overall attention to creating an eco-industrial development, it is one that Greenview can be proud of,” said Tyler Olsen, Reeve for the Municipal District of Greenview.

Construction is scheduled to begin in summer 2023. According to Alberta’s press release, the facility is expected to provide more than 4,000 jobs during the construction phase and 400 permanent jobs once it opens.

The investment from NPC and the production plant was made possible through Alberta’s Recovery Plan to create jobs, build infrastructure and diversify the economy. The plan was developed due to the COVID-19 economic crisis, global recession and world oil price collapse.

The plan outlines more than $10 billion in spending for infrastructure projects and creating more than 32,000 jobs:

A series of large-scale projects were scheduled to be launched in the summer at a cost of at least $600 million. The investment through the Recovery Plan is reportedly the “largest-ever investment in infrastructure” in Alberta.

What a week in Alberta?

Joined @MDofGreenview this morning in Grande Prairie to announce another major investment - this time in Alberta’s petrochemical sector.

More and more investors are choosing Alberta. And for good reason!

Also a part of the Recovery Plan, the Alberta Petrochemicals Incentive Program (APIP) provides grants to companies such as NPC to encourage investment in petrochemical facilities. According to the program guide, key features include:

The Alberta Industrial Heartland Association reportedly estimates that there is an opportunity to grow the sector by more than $30 billion by 2030.

Much like Canada, other countries have recently invested and outlined plans for lowering carbon emissions from buildings.

According to reports, the Climate Emergency Retrofit Guide was created with the help of more than 100 architects, engineers and building experts regarding best practices in home retrofitting and how existing homes can meet the U.K.’s Net Zero targets.

The guide also sets out six key principles for retrofit best practices. Of them, the guide specifies creating a “whole house Retrofit Plan,” which must follow the LETI Retrofit Process:

In August, Norway launched work on what it’s calling “Project Longship”—a 1.7 billion euro ($2.01 billion) project that plans to bury up to 1.25 billion tons of captured carbon dioxide under the North Sea.

Compelled by the Paris Agreement to achieve net-zero emissions by 2050 to give the world a chance of capping global warming at 1.5 degrees Celcius above pre-industrial levels, Norway has devised a carbon capture and storage (CCS) project that will bury collected CO2 reserves below the North Sea.

The project is not only expected to help Norway reach its carbon-neutral goals but will also create thousands of new jobs in the process.

Phase one of the project is expected to be completed by 2024 and plans to have a capacity of 1.5 million tons per year.