'Build Back Better' Will Aid Buildings

Today (Nov. 15), President Joe Biden will sign into law the largest federal investment in infrastructure in more than a decade. Slated to be joined by several members of Congress, the $1.2 trillion legislation is expected to repair more than just roads and bridges, however.

“If the U.S. is going to lead on climate, our buildings will need to be twice as efficient as they are today. They will also need to be powered by clean renewable energy sources,” said Narada Golden, VP and leader of built ecology at the global engineering company WSP USA. “Accelerating innovation in low-carbon buildings through deep energy retrofits and building electrification are critical steps toward creating the clean energy economy of the future.”

This portion of funding was previously advocated by The American Institute of Architects in August, when the bill was being debated in Congress.

“To meet the challenges of the 21st century, our nation’s infrastructure funding needs to move beyond roads and bridges to include schools, hospitals, homes and more, especially as buildings contribute nearly 40% of worldwide carbon emissions,” said AIA 2021 President Peter Exley, FAIA, at the time. “This bipartisan legislation represents an important step toward improving our nation's buildings.” 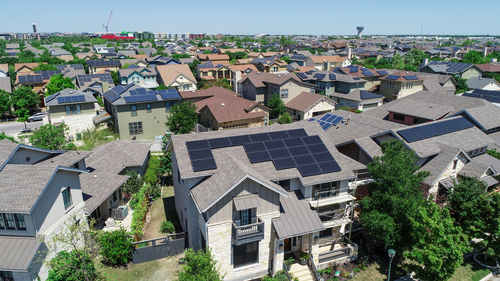 RoschetzkylstockPhoto / Getty Images
Today (Nov. 15), President Joe Biden will sign into law the largest federal investment in infrastructure in more than a decade.

“Investing in the research and development of materials that are low embodied carbon but also have better energy efficiency is dual purpose,” said Anica Landreneau, Director of Sustainable Design at global architecture firm HOK. “When we develop more efficient materials to build with, that’s energy security.”

However, Landreneau and federal legislative director at the U.S. Green Building Council Ben Evans, alongside members of the AIA, argue that the legislation isn’t enough.

“There are a number of good buildings provisions in there but it’s limited in its impact. It’s not something that’s going to have a transformational impact on the building sector,” Evans noted. “Buildings are responsible for 40% of carbon emissions in the U.S. We’re not going to meet our climate goals unless we do more about buildings.”

As a means to makeup for the legislation’s shortcomings, the AIA is urging lawmakers to ensure that additional funding for building improvements is included in the Budget Reconciliation package. Key provisions the AIA outlines that have yet to be met include: