MIT Looks at Emission Reductions in US Concrete

In a study conducted by current and former researchers at Massachusetts Institute of Technology’s Concrete Sustainability Hub, a team looked at how concrete emissions could be reduced in U.S. buildings and pavements.

The MIT Concrete Sustainability Hub is a team of researchers from several departments across MIT working on concrete and infrastructure science, engineering and economics. Its research is supported by the Portland Cement Association and the Ready Mixed Concrete Research and Education Foundation.

According to their findings, the team predicts that concrete buildings and pavement emissions could be reduced by roughly 50%, even as concrete use increases. Currently, concrete production is estimated to contribute around 1% of emissions in the nation and remains one of several carbon-intensive industries globally.

In predicting that the use of the material will only continue to increase in the future, researchers looked at how environmental impacts of concrete could be reduced.

To estimate how greenhouse gas reduction strategies could minimize the cumulative emissions of each sector and how they compare to national GHG reduction targets, researchers took extensive life-cycle assessments of the structures and pavements. In doing so, the team reported that if reduction strategies were implemented, the emissions for pavements and buildings between 2016 and 2050 could fall by up to 65% and 57%, respectively.

Additionally, the considered solutions would also enable concrete production for both sectors to attain carbon neutrality by 2050 and were close to reduction targets currently set by the Paris Climate Accords. 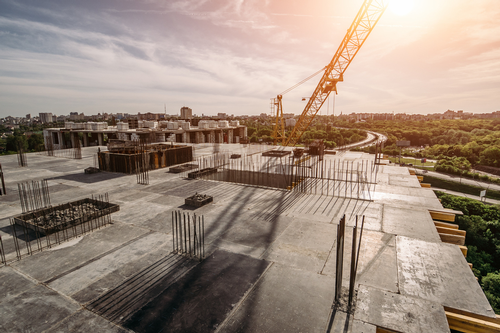 Specifically, in their paper CSHub researchers forecast potential greenhouse gas emissions from building and pavement sectors as various emissions reduction strategies were introduced between 2016 and 2050.

“We don’t have details on every building and pavement in the United States,” explained Randolph Kirchain, a research scientist at the Materials Research Laboratory and co-director of CSHub.

“As such, we began by developing reference designs, which are intended to be representative of current and future buildings and pavements. These were adapted to be appropriate for 14 different climate zones in the United States and then distributed across the U.S. based on data from the U.S. Census and the Federal Highway Administration.”

In order to reflect the complexity of it all, the team’s models were created to have the highest resolutions possible.

“In the pavements sector, we collected the current stock of the U.S. network based on high-precision 10-mile segments, along with the surface conditions, traffic, thickness, lane width and number of lanes for each segment,” said Hessam AzariJafari, a postdoc at CSHub and a co-author on the paper.

As a result of the intricate framework, the team was able to analyze a “projected” and an “ambitious” scenario of reduction strategies and system attributes for buildings and pavements over the 34-year analysis period, defined by the timing and intensity of greenhouse gas reduction initiatives.

In the projected scenario, solutions in the building sector were reported to encompass expected grid decarbonization and improvements to building codes and energy efficiency reflective of what’s currently being implemented in the nation. For pavements, the sole projected solution was improvements to vehicle fuel economy.

MIT adds that both project scenarios for both sectors featured a gradual introduction of low-carbon concrete strategies.

“In the ambitious scenario,” explained Kirchain, “we went beyond projected trends and explored reasonable changes that exceed current policies and [industry] commitments.”

While the buildings and pavement strategies were the same, they were implemented more aggressively. Particularly in the pavements sector, it was observed that more energy was sent out of the Earth’s atmosphere as more reflective pavements were introduced.

“What our life-cycle assessment found,” said Jeremy Gregory, the executive director of the MIT Climate Consortium and the lead author on the paper, “is that [this prediction] isn’t necessarily the case.

“Instead, we found that more than 80% of the total emissions from new buildings and pavements between 2016 and 2050 would derive from their operation.”

However, despite looking into these solutions, researchers found that the vast majority of the GHG emissions from new buildings and pavements during this period would derive from operational energy consumption rather than emissions created by materials production and construction.

Furthermore, these operations would create the majority of emissions through 2050 unless all energy sources—electrical and thermal—are carbon-neutral by 2040.

“The gap between the pavement scenarios shows that we need to be more proactive in managing the GHG impacts from pavements,” explained Kirchain. “There is tremendous potential, but seeing those gains requires action now.”

The findings of this research have since been published in a new paper, Proceedings of the National Academy of Sciences.

“In this study, we focused on mainly embodied reductions for concrete,” added Gregory. “But other construction materials could receive similar treatment.

“Further reductions could also come from retrofitting existing buildings and by designing structures with durability, hazard resilience and adaptability in mind in order to minimize the need for reconstruction.”

Recently, a team of current and former MIT CSHub researchers published a paper estimating emissions for all buildings slated to be constructed in the U.S. under two greenhouse gas reduction scenarios.

The study arrives in wake of the nation’s anticipated building boom, which from 2017–2050 is expected to construct more than the equivalent of New York City 20 times over. Currently, building emissions in the U.S. make up 27% of the nation’s total emissions.

For the study, researchers looked to “embodied” emissions, which are emissions created from materials production and construction. Regarding the planned construction over the course of several decades, MIT researchers found that embodied emissions would represent about a quarter of the nation’s emissions between 2016 and 2050.

In addition, the researchers took their findings a step further, pointing out that different regions would have varying priorities for GHG reductions, such as adjustments made to energy consumption. To start the study off, the team first centered around GHG reductions for concrete.

After measuring the operational and embodied GHG emissions for each reference design, the team scaled up their results to county and national levels based on building stock forecasts. This allowed the team to better estimate the emissions of the entire building sector between 2016 and 2050.

The projected scenario corresponded to current trends by assuming how grid decarbonization would follow Energy Information Administration predictions; the widespread adoption of new energy codes; efficiency improvement of lighting and appliances; and, for concrete, the implementation of 50% low-carbon cements and binders in all new concrete construction and the adoption of full carbon capture, storage and utilization (CCUS) of all cement and concrete emissions.

The ambitious scenario, however, was more aggressive in that it assumed a 33% reduction in grid emissions by 2050 and moved other projected emission deadlines by five to 10 years, respectively.

As a result of their testing, the team found that without any implementation of any GHG reduction strategies, the building sector would emit 62 gigatons of CO2 equivalent between 2016 and 2050.

In coming to a middle ground between the strategies, the team found that despite extensive construction over the period, embodied emissions would make up 23% of cumulative emissions.

Proposed solutions for the mostly residential-based emissions included CCUS and low-carbon binders for concrete production, and improvements to energy codes. These proposed solutions were also made for areas in the Southeast region.

For the Midwest, researchers suggested improvements to energy efficiency and the grid. On the contrary, New England and California were predicted to see the smallest reductions, thanks to their existing strict energy codes.

The team’s research findings have since been published in the journal Applied Energy.