“Tonight, we took a monumental step forward as a nation,” President Joe Biden said in a statement following the 228-206 vote. “The United States House of Representatives passed the Infrastructure Investment and Jobs Act, a once-in-generation bipartisan infrastructure bill that will create millions of jobs, turn the climate crisis into an opportunity and put us on a path to win the economic competition for the 21st Century.”

Now, the bill heads to Biden’s desk to be signed into law.

“I look forward to signing both of these bills into law. Generations from now, people will look back and know this is when America won the economic competition for the 21st Century.” 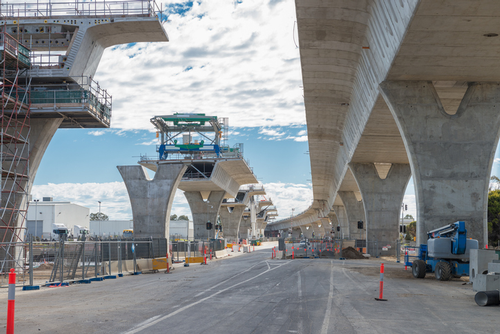 “This historic investment in infrastructure is what I believe you, the American people, want, what you’ve been asking for a long, long time,” said President Biden earlier this summer.

Touted as being the largest infusion of federal investment into infrastructure projects in more than a decade, the bipartisan legislation outlined nearly $550 billion in new spending above what Congress was already planning to allocate for infrastructure over the next eight years.

Chiming in regarding the victory of the bill's first passing, Republican negotiator, Sen. Rob Portman (R-Ohio) said, “Everyone involved in this effort should be proud of what this body has achieved today. The Senate is doing its job, it is doing its job by helping the American people we represent through a historic investment in our nation's infrastructure that will serve the American people for decades to come.”

For weeks, the legislation was noted to have been negotiated by a group of five Democrats and five Republicans. Just prior to its push, the Senate finished up working through a collection of nearly two dozen proposed amendments to the pending legislation. Of them, Congress officials agreed in a 97-0 vote to approve a proposal to broaden the reach of federal surety-bond protections by extending the Miller Act.

The protections directly affect construction projects in that they would include projects assisted by the Transportation Infrastructure Finance and Innovation Act (TIFIA). Traditionally, the program is used to finance public-private partnerships (P3s) in order to have DOTs ensure the design and construction of a project that receives benefits from the TIFIA program have appropriate payment and performance security in place. However, oftentimes P3 projects fail to maintain the same level of protection required on public infrastructure projects. Without these protections, in the event of a contractor default, the projects are in turn halted, or can even be terminated, leaving contractors and workers without pay.

In extending the Miller Act, a new payment and performance protection was proposed through the use of surety bonds, which provides monetary compensation in case a contractor fails to perform the acts as promised. The bonds would play a vital role in ensuring contractors in financial distress avoid bankruptcy allowing subcontractors and workers of public works projects to receive compensation and allowing the project to be delivered within the budget and on time.

The surety provision is reported to have House support, too. A similar amendment was included in the House-passed infrastructure bill, the INVEST in America Act.

Looking at the White House's Fact Sheet regarding the infrastructure package, the legislation proposed:

“America’s often had the greatest prosperity and made the most progress when we invest in America itself,” Biden said. “And that’s what this infrastructure bill does, with overwhelming support from the United States Senate.”

The Senate passed the Infrastructure Investment and Jobs Act after considering 22 proposed amendments.

Although the resulting bill was less than the roughly $2.2 trillion "American Jobs Plan" that Biden had proposed at the beginning of the year, Democratic leaders pledged to pursue the rest of their spending priorities as part of a second $3.5 trillion budget measure.

Immediately after voting the infrastructure bill to pass, Senate Democrats pivoted to debate on the second half of the budget, which included investments in free community college, childcare, paid family leave and efforts to slow and mitigate climate change. While Republicans were reported to unanimously oppose the measure, House Speaker Nancy Pelosi (D-California) has said she would not take up the bipartisan measure until the broader budget bill also passed the Senate.

Earlier this summer, the House was also reported to have passed its own infrastructure bill, which included more money for climate change mitigation and nearly $5.7 billion to pay for 1,473 home district projects, or earmarks, that were vetted by the House Transportation and Infrastructure Committee.

Reported to be a five-year plan, the INVEST in America Act is slated to meet President Biden’s vision of getting people to work and addressing the climate crisis, as outlined in his American Jobs Plan, by creating millions of jobs and modernizing the nation’s infrastructure.

According to a press release issued by the Committee, the legislation provides a new approach to federal transportation policy by emphasizing fixes on existing roads and bridges, as well as making record investments in passenger rail, public transit, cycling and walking infrastructure. The Act also includes zero-emission options, while creating safer, more connected communities.

The legislation acknowledges the Buy America provisions and labor protections and reports that the work outlined in the Act will be fueled by American workers, manufacturing, and ingenuity, with targeted investments in rural and underserved communities.

“The benefits of transformative investments in our infrastructure are far-ranging: we can create and sustain good-paying jobs, many of which don’t require a college degree, restore our global competitiveness, tackle climate change head-on, and improve the lives of all Americans through modern infrastructure that emphasizes mobility and access, and spurs our country’s long-term economic growth,” said DeFazio at the time.

“The INVEST in America Act puts a core piece of President Biden’s American Jobs Plan into legislative text—seizing this once-in-a-generation opportunity to move our transportation planning out of the 1950s and toward our clean energy future. Let’s get this done.”

Looking at the numbers, the INVEST in America Act plans to provide $343 billion for roads, bridges, and safety (with $32 billion specifically outlined for bridge funding); $109 billion for transit; and $95 billion for passenger and freight rail. Of that, some $4 billion plans to be invested in electric vehicle charging infrastructure, while another $8.3 billion would go to activities to reduce carbon pollution.

The bill also places emphasis on equity through initiatives such as reauthorizing and updating the DOT’s Disadvantaged Business Enterprise program and establishing apprenticeship goals for the largest highway grant programs with an emphasis on employing traditionally underrepresented populations, among others.

Included in the legislation, the bill also outlines member designated projects which plan to advance surface transportation authorization legislation later this spring, building on H.R. 2, the “Moving Forward Act,” from the 116th Congress. The initial Moving Forward Act was introduced in June 2020, calling for an increase in funding for road and bridge repairs, in addition to funding for clean drinking water.

Currently, the highway bill includes a variety of projects of both vast and local proposals and fall mostly within the $1 million to $5 million range. In total, the bill includes $5.7 billion in earmarks—a little more than one-third of the $14.9 billion members requested.

Of the 605 projects requested by Republicans, nearly 67% were selected, while of the 1,778 projects Democrats requested, 1,067, or 60%, were selected. Additionally, 38 projects were split among multiple members, with three of those projects providing funding to both Democratic and Republican districts for the same project.

At the end of May, the U.S. Senate Environment and Public Works Committee unanimously voted in favor of a five-year, $303.5 billion highway bill. The vote was touted as a rare case of congressional bipartisanship as the White House and Senate negotiators continue efforts to land on a new, broader multi-sector infrastructure package.

According to reports, the last highway legislation to be passed was the Fixing America’s Surface Transportation (FAST) Act, which former President Barack Obama signed in 2015. Differing from the FAST Act, the latest legislation represents an increase of roughly 34% in additional funding and is noted to be the largest component of a surface transportation package.

Major points in the legislation as it continues to be developed are the $18 billion its outlined for climate emission reduction in the transportation sector. The allotted funding includes $2.5 billion to construct charging stations for electric vehicles and fueling stations for hydrogen cell-powered vehicles as well.

In addition, the bill is also projected to provide $500 million to rehabilitate and retrofit infrastructure to better withstand the weather effects of climate change, such as more powerful hurricanes and increased wildfires, among others.

Like the popular INFRA grant program (formerly TIGER grants), the bill outlines a $2 billion Rural Surface Transportation Grant program, which plan to be awarded via competitions among the states and other applicants and creates a separate discretionary grant program for bridges.

Additional efforts from the House will also be required prior to the bill’s passing. Legislators would have to act quickly though, as the existing FAST Act extension lapsed Sept. 30. At the time, the new $303.5 billion highway bill was still pending considerations on the Senate floor.

At the end of October, Congress passed a second short-term extension of the Highway Trust Fund, which was set to expire on Dec. 3. The last extension had been passed on Oct. 2 and would have expired on Oct. 31.

The announcement came as House leaders were unable to come to an agreement to vote for the Infrastructure and Jobs Act. The extension was passed in a 358-59 bipartisan vote in the House and unanimously in the Senate, reportedly ensuring that nearly 4,000 federal employees would not be furloughed.