Researchers at the École Polytechnique Fédérale de Lausanne (EPFL) in Switzerland recently unveiled a footbridge prototype using reinforced concrete blocks from walls of a building being renovated. This project is reportedly the first time concrete has been reused in this way and “is part of an initiative to substantially shrink the construction industry’s carbon footprint by adopting a circular economy approach.”

The research and engineering team was from the Structural Exploration Lab (SXL), a part of EPFL’s School of Architecture, Civil and Environmental Engineering (ENAC) and included Jan Brütting, a recent doctorate graduate from SXL who initiated the project, and fellow EPFL postdoc Maléna Bastien Masse. The bridge was funded by an ENAC Innovation Seed Grant.

“No other new concrete footbridge has a carbon footprint as small as ours,” said Corentin Fivet, a tenure-track assistant professor at EPFL and head of the SXL within the Smart Living Lab, in the press release. “Imagine if every obsolete concrete structure out there was cut into blocks and used to meet some of the global demand for new concrete. That would be a big step towards addressing some of the most pressing climate-change challenges.

“People are hesitant to reuse concrete due to a variety of concerns. But we wanted to show that those concerns are largely unfounded. Blocks of concrete that are selected for reuse are just as reliable and useful as new blocks.”

The footbridge consists of 25, 10-meter-wide (roughly 33 feet) blocks of concrete created from walls scheduled to be torn down by Swiss construction company Diamcoupe. The building being renovated had reportedly been erected less than 10 years ago. 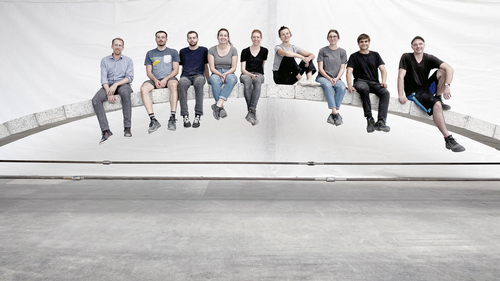 “We gave ourselves two months to find a source building in the region and a demolition company that would be interested in working with us,” Masse said. “We asked Diamcoupe to cut the concrete into the sizes we needed and to drill holes through them for our prestressing cables. These cables were provided by Freyssinet and used to build the arch.”

The engineers added mortar to smooth out the surface and dimensions on the 20-centimeter-thick (roughly 8 inch) blocks. Brütting explained that arches are the “ideal structure” for the project, since the blocks are held by compression forces.

“Most buildings in Switzerland are made out of concrete and producing this raw material accounts for 7% of CO2 emissions from anthropogenic activity,” Fivet said. “What’s more, concrete makes up 35% of demolition waste. When the material reaches its end of life, it’s at best broken down into gravel or granulate to create recycled forms—but that consumes a lot of energy.

“If we were instead to cut up concrete blocks and reuse them, we could both prevent the need to produce more concrete and eliminate the inert waste. The carbon emissions from this process wouldn’t necessarily be zero, but they would be drastically reduced. We would delay the need to downcycle obsolete concrete.”

According to EPFL, Fivet is also studying the factors that lead a building to become obsolete and the architectural characteristics that would facilitate the reuse of obsolete building components. The next goal would be to make demolition companies and producers in the industry to create a circular economy approach.

The bridge was inaugurated at the Smart Living Lab in Switzerland on Oct. 11.

In 2017, a startup firm associated with the Swiss university said its newly developed additive can help to control many properties of concrete, leading to a harder material that's slower to deteriorate.

Kumar Abhishek, a then-doctoral student at EPFL, in Lausanne, Switzerland and CEO of Nanogence, reported patents on a new, inorganic additive for concrete that it said can reduce the amount of concrete needed on a project, while extending a structure’s life.

Abhishek performed research on the nanoscopic structure of concrete as part of his thesis work, according to EPFL. Using this concrete knowledge, he developed the additive, the chemical nature of which is a proprietary secret. The company says the single additive could take the place of a number of additives currently used to affect cure time and texture.

As the additive is inorganic, Abhishek says it can eliminate carbonation issues associated with carbon-based cement additives. Carbonation can lead to moisture infiltrating concrete and deterioration, as well as corrosion of the rebar that often reinforces structural concrete.

Abhishek also says the additive creates harder concrete, which he notes could help reduce the amount of concrete needed to build a given structure.

In 2019, EPFL announced the development of a next generation ultra-high-performance fiber-reinforced concrete.

Research was headed by the EPFL’s Structural Maintenance and Safety Laboratory (MCS) and was funded by Swiss National Science Foundation's NRP “Energy Turnaround."

Created by EPFL researcher Amir Hajiesmaeili, UHPFRC is reported to release 60-70% less carbon dioxide than the previous generation of fiber-reinforced concrete. The secret? Hajiesmaeili substituted stiff synthetic polyethylene fibers for steel fibers, in addition to replacing half of the cement mixture used to bind concrete with limestone.

Overall, Hajiesmaeili’s UHPFRC was reported to be 10% lighter and impacts the environment 60-70% less than when compared to other fiber-reinforced concrete products.

The material is intended for use on new and old bridges and monuments, as well as other structures, and was slated to be used in 2020 for a bridge reinforcement project.