“It is widely accepted that retrofitting our existing buildings is absolutely critical if we are to achieve Net Zero,” LETI said. “Around 18% of our annual national CO2 emissions come from existing homes- homes that will still be standing in 2050. 80% of 2050’s homes have already been built. It is also widely acknowledged that the retrofit challenge is monumental.

“Over one million homes every year for the next 30 years will need to be retrofitted. We cannot afford to retrofit them twice. But if we retrofit them well, we can enjoy many environmental, social and economic benefits.”

According to reports, the Climate Emergency Retrofit Guide was created with the help of more than 100 architects, engineers and building experts regarding best practices in home retrofitting and how existing homes can meet the U.K.’s Net Zero targets. 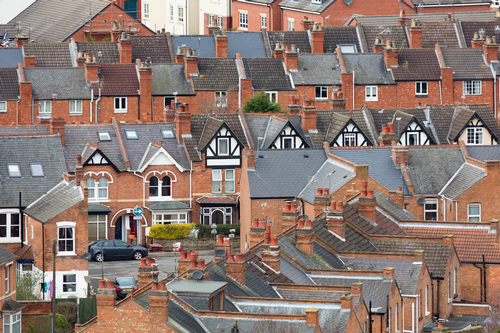 The guide also sets out six key principles for retrofit best practices. Of them, the guide specifies creating a “whole house Retrofit Plan,” which must follow the LETI Retrofit Process:

“Getting to grips with building physics is key to a successful retrofit,” said Antonia Khayatt, a consultant at the U.K. Green Building Council who worked on the Climate Emergency Retrofit Guide. “We point out the connections between insulation, moisture and ventilation and provide further detail in the appendices. Architects need to get a handle on this, which shouldn't be difficult, because they are inherently good at holistic thinking.”

The guide is free to access and targets 60-70% total energy consumption reductions for the average home in the U.K. While the percentages could sound high to readers and retrofitters, LETI reports that its team of experts looked over the country's current housing stock, renewable energy production and grid capacity to define a realistic goal.

LETI’s level of retrofit reportedly closely matches the AECB Retrofit standard in terms of both space heating demand and final EUI. The best practice model is as follows:

In addition to outlining retrofit options, the guide also touches on potential risks associated with poor retrofitting, such as building damage.

“Retrofitting buildings to be more energy efficient doesn't just reduce carbon emissions and energy bills, it can improve comfort and health, create jobs and reduce fuel poverty,” said Khayatt. “It can also reduce the demand on and costs to the U.K.'s energy infrastructure. This guide explains these issues and shows how taking the LETI approach to retrofit will help us enjoy these broader benefits.”

The guide is designed to be used by architects, engineers, Local Authorities, social landlords, energy professionals, contractors and clients.

Several organizations that have endorsed the Retrofit Guide include: the Royal Institute of British Architects (RIBA); Architects Declare, the Architects Climate Action Network; the UKGBC; and the Chartered Institution of Building Service Engineers.

A full copy of the guide can be viewed here.

LETI reports that following its recent publication, the organization intends to produce a separate retrofit guide for non-domestic buildings. Previously, in January 2020, the organization published a Climate Emergency Design Guide, which sets out requirements for new buildings to achieve climate targets. Since its publication, the document has been downloaded more than 60,000 times in 100 different countries.

The push for energy retrofits in both residential and commercial buildings has been years in the making. Last year, the American Council for Energy-Efficient Economy released a white paper that called on cities and states to mandate retrofits of inefficient buildings by requiring them to meeting certain standards carbon emission caps.

The paper, entitled, "Mandatory Building Performance Standards: A Key Policy for Achieving Climate Goals," also outlined 10 areas that it said are leading the way with their energy policies.

ACEE added that building performance standards could greatly reduce the nearly one-third of U.S. greenhouse gas emissions that come from buildings. If standards are applied to two-thirds of existing buildings, that could reduce carbon emissions in 2050 by more than the current annual emissions from all buildings, power plants and vehicles in New York state.

In the year prior, New York City Mayor Bill de Blasio announced plans to conduct deep energy retrofits in nine city facilities, in addition to plans for identifying another 28 facilities for future retrofits. The deep energy retrofits follow the initiatives set by the Climate Mobilization Act that passed that previous spring and aimed to reduce energy usage by 50% or more and reduce carbon emissions by 30% or more.

Guided by the Department of Citywide Administrative Services’ audits of city facilities comprising of 10,000 square feet and larger to pinpoint areas of high-energy usage that could be more efficient, the DCAS was collaborating with identified facilities to design and implement the retrofits.

According to New York City’s Roadmap to 80 X 50—a published guide for New York City’s goal to reduce greenhouse gasses 80% by 2050—the DCAS had already completed over 1,000 energy efficient and clean energy projects across 675 buildings at the time. The efforts are reported to have reduced greenhouse gas emissions from city-owned buildings by an estimated 120,000 metric tons of carbon dioxide equivalent annually.

In conducting the deep energy retrofits, depending on the structure, practices can include improving the building’s insulation; adopting increased natural daylight designs; better ventilation systems; upgrading electric fixtures; automating control of heating and cooling systems; and even the installation of solar panels capable of generating 100 megawatts of energy.

Earlier that year, in April, New York City council approved a package of bills and resolutions—known as the Climate Mobilization Act—intended for radical energy efficient improvements. The act requires that all new residential and commercial buildings in the city have green roofs made up of either plants, solar panels or small wind turbines—or a combination of all three.

Unlike other trending cities who only a require a traditional 25% to 50% coverage, New York City’s standard calls for 100% total green roof coverage.

The green roof legislation came in on the heels of de Blasio’s release of $14 billion act, OneNYC2050—Building a Strong and Fair City. That legislation plans to cover new buildings, as well as those undergoing major renovations, and plans to cut the city’s greenhouse emissions by 30% by 2030.

The retrofitting of thousands of buildings statewide was estimated to cost $4 billion.

By June, New York Gov. Andrew M. Cuomo and legislative leaders announced the passing of Senate Bill S6599, which set a net-zero emissions economy goal by 2050. The legislation is one of the United States’ most aggressive climate change action plans to date.

In a vote 41-21, the Climate Leadership and Community Protection Act requires that New York reduces its emissions 85% below 1990 levels by 2050 and offset the remaining 15% by removing carbon dioxide from the atmosphere through planting trees, greening infrastructure and investing in proper technology.