Marine and protective coatings company Jotun recently announced that it has signed a commercial agreement with marine transport company U-Ming to include its Hull Skating Solutions (HSS) in bulk carrier projects at Shanghai Waigaoqiao Shipyard (SWS) in China.

“U-Ming is committed to be the front runner of sustainable marine transport services and our customers’ first choice in dry bulk shipping. As part of our decarbonization strategy, we have been involved in many initiatives driving meaningful changes to reduce emissions,” said C.K. Ong, President of U-Ming.

“The recent IMO requirements on EEXI and CII is an opportunity to differentiate ourselves by offering our customers highly efficient vessels with significantly reduced operating fuel costs and greenhouse gas emissions. Collaboration with stakeholders is the key to accelerate maritime decarbonization and the Hull Skating Solutions offered by Jotun certainly supports and enhances our green ambitions.”

According to the company’s press release, the HSS system will be fitted on one of U-Ming’s four LNG dual-fuel Tier III 190,000 dwt bulk carriers to be built by SWS to support the long-term charter with mining giant Anglo American.

“I am very happy with the positive response from U-Ming and SWS to adopt Jotun’s HSS at the newbuilding stage. They are shaping the future of a sustainable shipping industry,” said Morten Sten Johansen, Regional Marine Director, Northeast Asia for Jotun. “With HSS we can deliver the promise of an ‘always clean hull’ from day one, helping our customers to maximize the benefits of lower fuel costs, full flexibility in operations and effective biofouling management. Bulk carriers have sailing patterns that are highly dependent on market forces.” 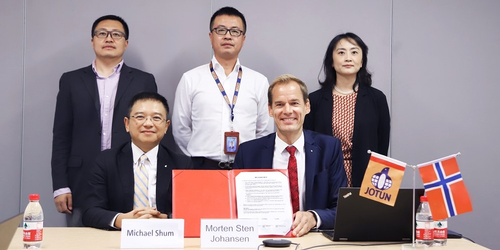 Jotun
Marine and protective coatings company Jotun recently announced that it has signed a commercial agreement with marine transport company U-Ming to include its Hull Skating Solutions (HSS) in bulk carrier projects at Shanghai Waigaoqiao Shipyard (SWS) in China.

U-Ming’s vessels are reportedly expected to be delivered throughout 2022 and 2023.

Jotun announced the launch of the HSS, a proactive cleaning solution for the maritime industry, in March 2020.

Running on magnetic wheels equipped with electric motors for propulsion and steering, the HSS is comprised of several cameras and sensors, supporting the operator with data for navigation and documenting fouling on the ship hull.

While connected to the operator’s control center through an umbilical or working remotely through 4G coverage, the technology uses a motorized brush which can remove individual bacteria and biofilm from the hull before macro-fouling can take hold, without causing erosion or damage to the hull coating.

Depending on the size and condition of a vessel, Jotun reports that HSS can complete an inspection and proactive cleaning on a hull within 2-8 hours. Additionally, the company estimates that if all ships in challenging operations converted to HSS, carbon dioxide emissions would be reduced by at least 40 million tons per year.

The first commercial contract for the HSS was signed with MSC Mediterranean Shipping Company SA in September 2020.

HSS was scheduled to be installed at GWD Guangzhou Shipyard in China later in 2020, at the same time it underwent class renewal and scrubber installation, according to the companies.

As part of the contract, MSC installed the Jotun HullSkater, which Jotun touts as the “first robotic technology that has been designed for proactive cleaning,” as well as the SeaQuantum Skate antifouling, on the 14,000 TEU MSC EVA.

According to the company, the four-part organization program was designed by Jotun’s team of experts to optimize hull performance, regardless of its coating system. Ship operators can take full control of their operations through hull monitoring, fouling risk alerts, inspections and advisory services.

In addition, operators can benefit from the complete package or select only the parts that work for them.

The program is grounded in Jotun’s proprietary fouling risk algorithm, supported by data from different sources to make fouling control and efficiency more predictable. By providing insight into issues before they occur, ship operators can take planned corrective actions. As more data and information accumulate, best practices can be identified and implemented across the whole fleet, the company says.