“The delegates were pleased, grateful and very complimentary about the venue, curriculum, amenities and activities,” Palmer said. “We take pride in better connecting contractors and suppliers in the industry and are pleased to have continued assisting in making these connections in the commercial sector.”

After attendees were able to meet and get to know one another during Tuesday’s collection of networking activities and icebreaker reception, contractors and suppliers met the following morning for the Leadership Conference’s opening keynote address by Sean Snaith, Director of the University of Central Florida’s Institute for Economic Forecasting. 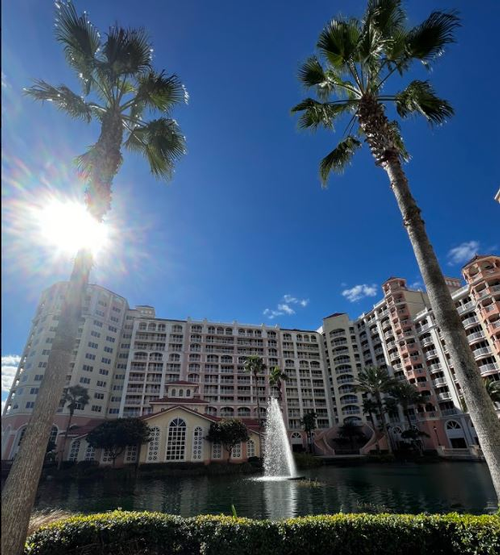 This opening was followed by a presentation by Laurence Pearlman, Senior Vice President of Consulting Solutions at Marsh Advisory. In his session, Pearlman discussed the importance of risk mitigation and how to create a risk mitigation scorecard for your business. An article version of his presentation was recently published in the fall issue of Commercial Painting.

Dwain DeVille, CEO Coach, Founder of CEO Ride and author of The Biker’s Guide to Business: When Business and Life Meet at the Crossroads, followed the discussion with the first topic of his three-part series: DECIDE. During his talk, DeVille helped participants to envision where they saw themselves and their business five years from now.

After DeVille’s presentation, attendees broke for lunch sponsored by Sherwin-Williams. Following the break, participants came together for a roundtable discussion moderated by CPIA Co-founder, Aaron Moore. During the discussion, contractors and suppliers alike brought up what they believed were key issues in the commercial coatings industry and potential solutions.

DeVille followed the discussion with the second topic of his three-part series: DESIGN. In this second installation, DeVille helped attendees take the information they wrote down in their first session to develop a plan of action, or how they might be able to begin working to achieve those goals.

After a short break, select supplier representatives took to the stage for a Coatings Panel which was moderated by Jim McBrayer, CEO of McBrayer & Associates. Speakers for the session included Nate Wolff and Richard Pickering of Sherwin-Williams, Joseph Dellafave of Benjamin Moore, Paul Lavalee of Arkema, Sheldon Roth of PPG, Matt Waszkowski of Behr and Pat Noble of Uniflex.

Wednesday’s sessions concluded with a presentation on the CPIA today and in the future. This session was hosted by CPIA Co-founder Steve Hester, CPIA Marketing Director Mike Stanley and Commercial Painting Editor-in-Chief Destiny Johnson.

That evening, attendees and guests enjoyed a Sherwin-Williams-sponsored dinner on the Grand Event Lawn of the Hammock Beach Golf Resort & Spa.

Thursday morning, the CPIA Leadership Conference portion of the event concluded with two final presentations and Commercial Contractor Connect launched with the start of its one-on-one meetings. Kicking off the morning was DeVille with the final portion of his three-part presentation. In discussing DO, he covered how contractors and suppliers would have to execute the work required by the goals and plans to best achieve their five-year plan.

In closing the leadership conference, McBrayer discussed how attendees should be working to win their next customers and what they can do to streamline achieving business opportunities and bids. This presentation was followed by a CCC instructional by Palmer.

For the rest of the day and into Friday morning, contractors and suppliers met for one-on-one meetings.

In concluding the event, Johnson announced the 2021 Elevation Awards. This year’s winners are slated to be announced in the winter issue of Commercial Painting and in PaintSquare Daily News.

Following registration, the CPIA Leadership Conference and Commercial Contractor Connect officially kicked off Tuesday, Oct. 19, with a series of recreational group networking activities. During the afternoon, attendees split up into groups where they participated in oceanfront golf, deep sea fishing or an ecological kayaking tour.

Tuesday night concluded with an outdoor icebreaker reception and dinner at the resort, sponsored by Sherwin-Williams.

While the next two days were packed full of educational sessions, roundtable and panel discussions and one-on-one meetings, by Thursday evening, after the meetings wrapped up, attendees were taken to the Conservatory Clubhouse at Hammock Beach for a dinner and casino night, sponsored by PPG.

The event concluded with cigars and cocktails back at the resort’s main campus.

TPC would like to thank the following sponsors for making Contractor Connect 2021 possible and successful:

While a destination has yet to be announced for 2022, Palmer reports that, “This event will only get bigger in 2022, as will the CPIA.

“In fact, we had several join during the event including Higgins Painting in Australia—a $125 million dollar company with 20 locations.”

Palmer concluded that he looks forward to the continued growth and success of the unique pair of events.

The Commercial Painting Industry Association is the first and only trade association created exclusively for commercial painting professionals. Its mission is to nurture a peer-based community of industry experts dedicated to learning and development through collaboration. CPIA members have access to all the relevant resources and guidance required for further business growth.

Created just a couple of years ago, CPIA Co-Founder Aaron Moore said the organization has grown into an “epic group of some of the most important commercial painting organizations in North America.”

In total, the CPIA member companies represent over $150 million in yearly commercial project work and are large buyers of products and services specific to the commercial coatings market.

“CPIA members, themselves, are the organization’s most valuable asset, because their knowledge, expertise and network form the very core of the association,” said CPIA Co-Founder Steve Hester. “They take a proactive role in the industry and elevate their business through membership opportunities and benefits.”