A team of engineers from Oklahoma State University were recently reported to have successfully 3D-printed a concrete wall.

The project, led by OSU professor Tyler Ley, was conducted over a period of three years and involved 150 university students.

While Ley told university independent news outlet O’Colly that the group could have 3D printed anything, the team decided to focus on the affordability of houses.

“Homes are a huge expense for people, just massive,” Ley said. “People are paying on their homes for ... 50 years, and if you can decrease the home by ... a factor of two, that means they would have so much more money to spend on all kinds of cool stuff in their lives.”

In looking at all the aspects and building materials involved in residential construction, Ley and the team decided to focus on walls because they are typically the most expensive and hardest to build. Concrete walls can also better protect its inhabitants from natural disasters, such as tornados and fires, as well as pests. 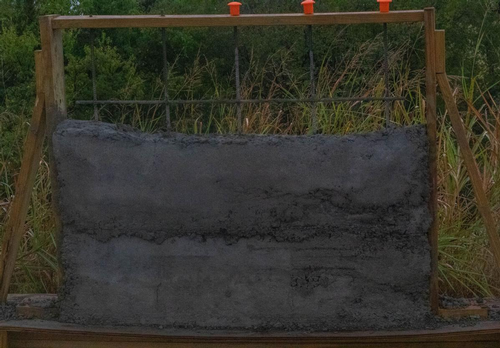 Before the students could begin printing, however, they needed to manually simulate printing the walls. In utilizing everything from large ice bags to long pipes and plungers, the students conducted what Ley calls “oopsie tests.” These tests required the students to both mix and stack the concrete on their own.

Although the “oopsie” tests experienced many failures, students were eventually able to create a roughly five-foot-tall wall. Ley reported that this was achieved by binding the aggregate concrete together with a clay commonly used in the coatings industry.

Jim Beckstrom, a retired OSU professor, was also reported to have aided in the project’s success and helped to prepare the machinery prior to printing. Beckstrom said because the Cooper Lab is a research facility—where the tests were conducted—the process of building the wall is different than how it would be in field, because in the lab, people are working on a smaller scale with shovels and wheelbarrows.

“In real life, what will happen is the concrete will show up by the truck load,” Beckstrom said.

Though there were many moving parts when conducting the research and moving towards using the 3D-printing technology, Beckstrom said that it was very rewarding to witness the team’s resilient reactions while working toward creating new construction methods.

“There’s so many opportunities in this thing to make a big difference in the world, it’s very exciting to think about,” Beckstrom said.

For their research, scientists combined desert sand, ceramsite particles and recycled concrete aggregate to formulate a low-cost building material. Developed into three different particle gradings, the mixtures were designed with continuous, open and interrupted gradations of solids, respectively, based on the theory of particle interference, and aimed to meet the requirements of extrusion-based 3D printing.

In testing the materials, the concrete substitute reportedly demonstrated a self-supporting “skeletal” effect. In the paper’s abstract, authors note that the resulted effect made by the gradated particles reduced the flowability of the mixtures, but that the structural build-up/buildability performance was improved (under the premise of the desired printability).

Additionally, the interlayer distribution and skeleton of the gradated aggregate was reported to have contributed to improved interfacial interlocking and contact bonding between layers—which could be observed through computed tomography scanning.

Taking additional tests on the formed structures, researchers found that the strongest formulation was capable of withstanding 91N of load, while its recycled concrete content served to increase the surface area between each layer, improving adhesion.

In their conclusions, the scientists suggest that adding further aggregates could help to mitigate the shrinkage seen in their cement matrix, but they also conceded that further research and development was needed to prevent potential cracking.

The research findings have since been published in the Cement and Concrete Composites journal.

At the beginning of the year, New York-based construction technology company SQ4D Inc., listed for sale a 3D-printed home that it said was the first slated to receive a certification of occupancy in the U.S.

The residential property, which was printed onsite with the company’s Autonomous Robotic Construction System, is listed on MLS for sale as new construction for $299,999, in Riverhead, New York.

The 1,400-square-foot home (plus 750-square-foot garage) offers three bedrooms, two bathrooms and features an open floor plan. The building material listed reads as insulated concrete forms and SQ4D notes that the home includes the same 50-year warranty that the company puts on all of its 3D-printed structures.

The ARCS technology reportedly built the footings and foundations, as well as the interior and exterior walls, and the company notes that it’s a step in its mission to help aid the affordable housing crisis.

The company reportedly has other plans being reviewed elsewhere in New York, as well as California.