Last week, the U.S. Supreme Court reversed a 2020 lower court ruling that blocked an estimated $3.6 billion of U.S.-Mexico border wall funding proposed by the Trump Administration and returned the case to a judge for reassessment. The decision comes based on the Biden Administration now being in office.

“The District Court should consider what further proceedings are necessary and appropriate in light of the changed circumstances in this case,” the justices said in a brief order.

In January 2020, Trump announced his plan to divert funds from Pentagon funding for border wall construction to complete an additional 885 miles of new fencing by spring 2022, approximately 376 more miles than the administration had slated for the U.S. border with Mexico.

The Supreme Court granted the appeal to vacate the initial ruling from a federal district judge in California and the Ninth Circuit Court of Appeals that the funding shift was unlawful.

President Joe Biden issued a proclamation shortly after taking office in January 2021 to pause the construction of the U.S.-Mexico border wall and rescinded the national emergency declaration Trump had put in place. 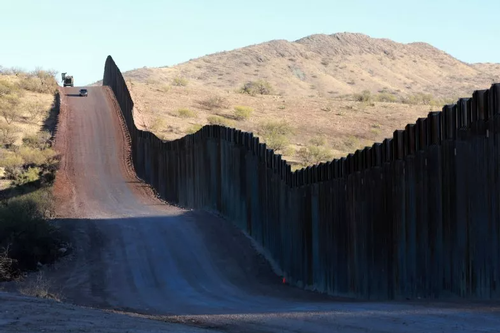 Micha Garren / Getty Images
Last week, the U.S. Supreme Court reversed a 2020 lower court ruling that blocked an estimated $3.6 billion of U.S.-Mexico border wall funding proposed by the Trump Administration and returned the case to a judge for reassessment.

Despite federal court rulings and Biden's proclamation, Texas lawmakers have pushed to continue construction of the border wall. In June, Texas Gov. Greg Abbott announced a $250 million down payment for construction of hundreds of miles of border wall just months after Republican House Rep. Bryan Slaton introduced House Bill No. 2862.

The legislation intends to create a fund to pay for the projects and would also allocate the earnings on the balance of the fund and reimbursement of related expenditures. Around the same time, Congressman Clay Higgins, a Republican from Lousiana and ranking member of the House of Homeland Secuirty Subcommittee on Border Secuirty, introduced the Finish the Wall Act.

More recently, in August, the Texas Department of Transportation announced that it was set to pay nearly $25 million for the construction of a roughly two-mile-long concrete border barrier. Slated to be constructed in Eagle Pass, the project also calls for a temporary fence near the right-of-way along State Loop 480, which the Department of Public Safety has reported to be a high-traffic area for immigration.

By the end of the month, the Texas House was reported to approve nearly $2 billion for the Texas-Mexico border wall project. The approval of funding is expected to triple the state's allocation for border security during the last biennium.

And last month, the Texas Facilities Commission announced that they had completed the vaulation phase for the Program Manager for the Border Wall. In reviewing the competeing contractors for the project, the Commission stated that they would be recommending the joint venture of Dallas engineering firm Huitt-Zollars and Pittsburgh-based energineereing firm Michael Baker International.

In October 2018, the U.S. Department of Homeland Security announced that any environmental regulations regarding the construction or repair of a section of the border wall for certain areas in Texas would be waived, drawing ire from environmentalists and private property owners alike. The announcement detailed exemptions in Cameron County; another announcement made the following day detailed similar measures for Hidalgo County.

In July, over a week after a federal judge blocked the Trump Administration from using $2.5 billion in funding for the border wall, CBP and the Army Corps of Engineers awarded a $33 million contract for four miles of border wall work in Texas. Environmental regulations for that section of structure were also waived. August also saw the award of another $305 million in contracts.

By December 2019, the project saw additional funding stemming from canceled military projects being assigned to three new contracts for the construction of over 30 miles of replacement fencing along the U.S.-Mexico border, totaling $316 million in work.

That same month, a federal judge blocked the Trump Administration from transferring $3.6 billion in Pentagon funds for new border wall barriers when it attempted to commander funds for the border wall that had already been authorized by Congress for other purposes.

The following month, the 5th Circuit Court of Appeals, based out of New Orleans, ruled 2-1 that a certain set of Department of Defense funding could be used for border wall construction and lifted the injunction. The Washington Post reported that due to this ruling, the President and his administration viewed the matter as an invitation to take money again in 2020.

However, it was announced later in January 2021 that Trump was gearing up to divert $7.2 billion of military funds to use for barrier construction in the U.S.-Mexico border wall project. To break down where the funds will come from, the President intended to use $3.5 billion from counternarcotic programs and $3.7 billion intended for construction projects.

In June 2020, the Ninth Circuit Court of Appeals ruled that Trump wouldn’t be permitted to divert $2.5 billion of military funds to the construction of the wall, as the action was considered an attempt by the president to skirt Congress. Even though the funds were transferred under a declaration of national emergency, Chief Judge Sidney R. Thomas penned the ruling, proclaiming that the action was a violation of the Appropriations Clause and therefore considered “unlawful.”

And in October 2020, the U.S. Court of Appeals for the District of Columbia reversed a lower court’s dismissal of House Democrats’ lawsuit challenging the Trump Administration’s authority to use Defense Department funds for construction of the U.S.-Mexico border wall. In a 3-0 decision, the appeals court issued a decision permitting Democrats in Congress to challenge Trump’s use of military funds for the construction of the border wall.

That same month, United States Customs and Border Protection officials reported that the Trump Administration was considering having more than 80 miles of the U.S.-Mexico border wall located in the Rio Grande Valley and Laredo, Texas, painted black.

Agency officials told CNN an epoxy coating was being considered for when future barriers are built and could cost the project an extra $1 million per mile.

In December 2020, the 5th U.S. Circuit Court of Appeals approved the Trump administration’s plan in a 2-1 decision to divert $3.6 billion in funding from more than 100 military construction projects for border wall construction.

Biden’s proclamation from January 2021 redirected the funds and paused the construction, but did not shut down the project.