Spanning back several years, government officials had previously pushed for wildfire building codes but were combated by the Oregon Home Builders Association, who claimed that fire-safe codes would add substantial costs to a home’s price. In other reports, however, it was indicated that fire-resistant homes could be minimally higher or potentially cheaper.

Oregon wasn’t the only state not mandating the use of fire-resistant materials. According to a report from NPR, most states in the West don’t require new construction or rebuilding to align with wildfire burning codes.

In 2019, the state of Oregon announced that fire mitigation building codes were optional. 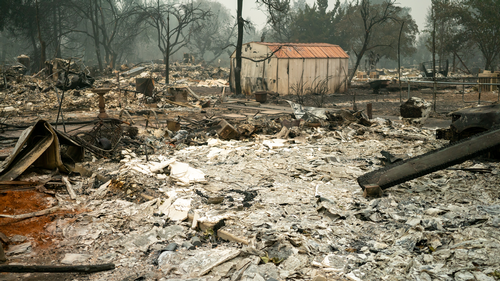 “I don't think any of us will forget the horror as we saw towns burned overnight, thousands evacuated their homes, leaving behind all of their belongings,” said Gov. Brown at the bill’s signing. “We were simply not equipped to fight the fires of this new age, which are faster and more fierce and fueled by the impacts of climate change.”

According to Democratic State Sen. Jeff Golden, who led the effort to pass the bill, the newly developed fire-risk maps will ultimately have the biggest influence over which areas will see the strictest fire-safe building codes for new construction. Golden adds that the bill outlines additional requirements for clearing out flammable materials around homes.

While the bill aims to better protect property owners from future destruction, it does not come without backlash. This is mostly in part to the legislation having to define a “wildland-urban interface,” where residential areas meet forests and rangelands. Due to these new restrictions, critics from real estate, construction and agricultural industries voiced concerns over whether the bill would increase costs for property owners, homebuilders and farmers and infringe on private property rights.

To mitigate the concerns, opponents of the new building codes have been placed on advisory committees as to better define these new interfaces. Some of members of the committee include Mark Long, CEO of the Oregon Home Builders Association, and Dave Hunnicutt, President of the Oregon Property Owners Association.

While those areas are being outlined, another program—backed with $11 million in funding from the legislation—has already been launched to clear flammable brush from “home ignition zones.”

While other Western states, like Colorado for instance, have yet to join the building code mandate, California has been leading the construction code battle against wildfires for more than a decade, having outlined its own wildland-urban interface codes. In its own version of the legislation, California specifies that roofs, siding and windows must be fire-resistant.

Minor aspects of a home, such as fine mesh over attic vents, are also important in preventing embers from being blown into a home and are also outlined in the building codes.

Despite its progressive measures against wildfires, parts of the state were still negatively affected back in 2017, having witnessed dozens of lives lost and hundreds of thousands of acres burned. Aerial photos of the region at the time show whole neighborhoods turned to ash and also illustrate the erratic behavior of the flames—torching one side of a cul-de-sac, but leaving the other arch untouched, for instance.

At the time, it was calculated that 2,600 homes in Napa were at “high” or “extreme” risk from wildfires and that the same applied to more than 8,400 homes in Sonoma. Total “potential risk” homes for the two areas totals nearly 200,000. To rebuild from that would have required at least $65 billion.

After fires raged through the state again the following year, reports looked at how residents were rebuilding their homes, specifically at insulated concrete forms. The ICF systems are made from hollow blocks of fire-resistant foam and fitted with rebar. They’re then filled with concrete and covered in siding.

Some companies in California were going so far as to not only build a home’s walls with the material, but also roofs. And some said at the time that they’d been making money off the term “fireproof,” which couldn’t be legally claimed.

“I’m encouraging people to call it highly fire-resistant, which it is,” said David Horobin, a partner at Estudio Verde Architects, at the time. “If for some reason the house were to burn from the inside, there would be problems.”

Horobin noted that, even if the entire building is constructed out of ICF, other finishes or features, such as windows, could provide a way for fire to get in, and it also won’t help if a fire starts from inside the home.

Builders were also touting a savings in insurance costs, though a spokesperson from the Insurance Information Institute disputed that claim as well, saying home owners “might get a discount.”

By 2020, it was reported that any homes destroyed in the event of a wildfire in California would be required to meet wildfire codes if rebuilt. Although the codes are no guarantee against destruction, because extreme fires can consume any kind of structure, they are reported to greatly improve the odds.