A team of current and former MIT Concrete Sustainability Hub (CSHub) researchers have recently published a paper estimating emissions for all buildings slated to be constructed in the U.S. under two greenhouse gas reduction scenarios.

The study arrives in wake of the nation’s anticipated building boom, which from 2017–2050 is expected to construct more than the equivalent of New York City 20 times over. Currently, building emissions in the U.S. make up 27% of the nation’s total emissions.

The team’s research findings have since been published in the journal Applied Energy.

For the study, researchers looked to “embodied” emissions, which are emissions created from materials production and construction. Regarding the planned construction over the course of several decades, MIT researchers found that embodied emissions would represent about a quarter of the nation’s emissions between 2016–2050.

In addition, the researchers took their findings a step further, pointing out that different regions would have varying priorities for GHG reductions, such as adjustments made to energy consumption. To start the study off, the team first centered around GHG reductions for concrete.

“We took a bottom-up approach, developing reference designs based on a set of residential and commercial building models,” explained Ehsan Vahidi, an assistant professor at the University of Nevada at Reno and a former CSHub postdoc. “These designs were differentiated by roof and slab insulation, HVAC efficiency and construction materials—chiefly concrete and wood.” 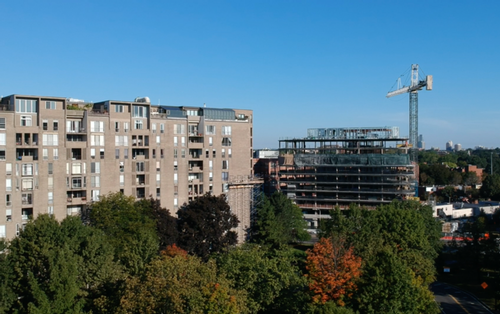 Massachusetts Institute of Technology
A team of current and former MIT Concrete Sustainability Hub (CSHub) researchers have recently published a paper estimating emissions for all buildings slated to be constructed in the U.S. under two greenhouse gas reduction scenarios.

After measuring the operational and embodied GHG emissions for each reference design, the team scaled up their results to county and national levels based on building stock forecasts. This allowed the team to better estimate the emissions of the entire building sector between 2016 and 2050.

Through this framework, the researchers then ran a “projected” scenario and an “ambitious” scenario.

The projected scenario corresponded to current trends by assuming how grid decarbonization would follow Energy Information Administration predictions; the widespread adoption of new energy codes; efficiency improvement of lighting and appliances; and, for concrete, the implementation of 50% low-carbon cements and binders in all new concrete construction and the adoption of full carbon capture, storage and utilization (CCUS) of all cement and concrete emissions.

The ambitious scenario, however, was more aggressive in that it assumed a 33% reduction in grid emissions by 2050 and moved other projected emission deadlines by five to 10 years, respectively.

As a result of their testing, the team found that without any implementation of any GHG reduction strategies, the building sector would emit 62 gigatons of CO2 equivalent between 2016 and 2050.

“In both scenarios, the largest contributor to reductions was the greening of the energy grid,” noted Vahidi. “Other notable opportunities for reductions were from increasing the efficiency of lighting, HVAC and appliances. Combined, these four attributes contributed to 85 percent of the emissions over the analysis period. Improvements to them offered the greatest potential emissions reductions.”

In coming to a middle ground between the strategies, the team found that despite extensive construction over the period, embodied emissions would make up 23% of cumulative emissions.

“This is a consequence of existing structures far outnumbering new structures,” explained Jasmina Burek, a CSHub postdoc and an incoming assistant professor at the University of Massachusetts Lowell. “The operational emissions generated by all new and existing structures between 2016 and 2050 will always greatly exceed the embodied emissions of new structures at any given time, even as buildings become more efficient and the grid gets greener.”

The team wasn’t done looking into the matter just yet, however. Due to the fact that emissions reductions could not be distributed evenly across the entire county, researchers identified several regional variations that could require additional actions to reduce building sector emissions.

“We found that western regions in the United States would see the greatest reduction opportunities from interventions to residential emissions, which would constitute 90% of the region’s total emissions over the analysis period,” said Vahidi.

Proposed solutions for the mostly residential-based emissions included CCUS and low-carbon binders for concrete production, and improvements to energy codes. These proposed solutions were also made for areas in the Southeast region.

“In the case of Southeastern regions, interventions should equally target commercial and residential buildings, which we found were split more evenly among the building stock,” explained Burek. “Due to the stringent energy codes in both regions, interventions to operational emissions were less impactful than those to embodied emissions.”

For the Midwest, researchers suggested improvements to energy efficiency and the grid.

On the contrary, New England and California were predicted to see the smallest reductions, thanks to their existing strict energy codes.

The MIT Concrete Sustainability Hub is a team of researchers from several departments across MIT working on concrete and infrastructure science, engineering and economics. Its research is supported by the Portland Cement Association and the Ready Mixed Concrete Research and Education Foundation.