Like many sectors within the protective coatings and construction industry, robotic technologies are making their mark in that they are streamlining operations and, in some cases, improving the ability to carry out inspections.

Most recently, it was reported that an automation company had developed a new robot specifically for the global scaffolding industry. The German company, Kewazo, reports that it has created a material-handling robot capable of constructing scaffolding.

Dubbed “Liftbot,” the technology automates manual material transport and intends to one day complete entire scaffolding installation tasks for structure maintenance and inspection. To better develop the technology, Kewazo reported late last month that it closed $5 million in Series A funding, which joined it with a growing pack of robotics developers aimed at construction innovations. 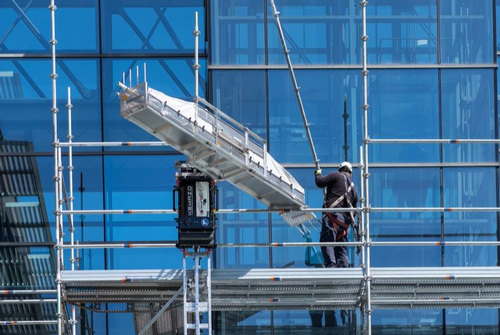 Kewazo
Most recently, it was reported that an automation company had developed a new robot specifically for the global scaffolding industry.

“So many aspects of the construction industry stand to benefit immensely from robotic intelligence and RaaS offerings,” said Puneet Agarwal, partner at True Ventures, which participated in the round. “The Kewazo team has a strong track record and proven solution that addresses a significant need in a critical part of the industry. We're excited to fund this team and help them expand to new verticals in construction and other markets.”

The Liftbot technology collects operational data and provides it to customers in the form of a data analytics platform. Those insights aid planning and improve profitability, but also work to provide additional customer benefits through faster, more predictable projects, the company says.

Officials from Kewazo report that with minor adjustments to the existing technology, the Liftbot could be applied to additional tasks such as insulation, painting and other onsite material transport.

“Since our Seed-Investment in 2018, Kewazo has come a long way from prototype to the marketable and robust Liftbot system,” said Matthias Guth, MIG Venture Partner and Kewazo Board member. “Having True Ventures now leading the Series A round takes the company to the next level and we are proud to further support Kewazo's international development.”

According to the company, the first batch of Liftbots has been successfully delivered to key customers in the EU markets. Prospective projects worldwide include scaffolding assembly at greenfield projects and maintenance jobs at construction sites, oil and gas refineries, power plants and shipbuilding yards.

Earlier this year, in May, the second-largest gas distribution network in the United Kingdom, gas utility SGN, began investing in the development of an autonomous roadwork robot.

According to Ollie Machan, SGN’s project lead for RRES, the robot enhances safety for the utility crews. Aside from two human operators to inspect RRES’s completed tasks and switch out its tool cart, the stand-alone, battery-powered robot practically does everything on its own.

Composed of a track-mounted platform that houses the robot’s battery and onboard computer, RRES also boasts a robotic arm with six degrees of articulation. For performing different tasks and stages of the excavation process, RRES is capable of automatically changing them out from its attached tool carts.

In addition to the combination of custom tools, the working protype also uses AI-based learning to navigate construction sites and perform its tasks. When first approaching a utility dig site, RRES assesses the site with a ground-penetrating radar attachment so that it can outline the area beneath the road’s surface. However, this guide is typically edited manually by an operator so that the machine can zero in on the exact location of the buried utilities.

From there, RRES confirms the depth of the dig by swapping its radar tool with a core drill. Then, RRES switches out for a custom 35-hp electric chainsaw to cut a circular keyhole in the roadway and is capable of making oval-shaped cuts up to 36 inches in diameter. Using a different pneumatic tool, RRES then lifts the core from the ground so that excavation of the soil below can take place. RRES performs this task within a box frame to prevent spillage outside the work area.

A month before the announcement, a team from Carnegie Mellon University’s Biorobotics Lab in the School of Computer Science's Robotics Institute reported that it was testing what it called a Hardened Underwater Modular Robot Snake.

According to CMU, HUMRS was created to assist the Department of Defense with inspecting ships, submarines and other underwater infrastructure for damage or as part of routine maintenance.

Led by Howie Choset and Matt Travers, co-directors of the Biorobotics Lab, the submersible robot snake was developed through a grant from the Advanced Robotics for Manufacturing Institute. Currently, the DoD is reported to have limited options when it comes to inspecting areas like a ship's hull, often requiring the Navy to either send down a team of divers at the ship’s location, postpone the inspection until the ship returns to port or schedule the vessel for a dry dock—all of which can be costly and take time to execute.

In March, researchers from the University of Newcastle School of Engineering reported that they’d begun developing a new drone technology to help predict what areas and specific pipes are at risk of water loss through corrosion.

While the risk of degradation is traditionally dependent on an underground water supply network’s age and the amount of moisture in the ground surrounding the infrastructure, more recently, sensor devices have been deployed at specific sites to measure water flow to indicate leaks or breaks.

The technique utilizes a Light Detection and Ranging sensor, commonly referred to as LiDAR, which is a remote sensing method that uses a pulsed laser to measure ranges and variable distances to the Earth. From the differences collected in laser return times and wavelengths, the data can then be used to make digital 3D-representations of the landscape and indicate the amount of water in the ground.

The LiDAR drone technology research headed by University of Newcastle investigates soil moisture and corrosion and is part of a larger innovative smart water management project coordinated by NSW Smart Sensing Network (NSSN) and is led by Sydney Water.