Researchers from the University of Tsukuba and Osaka University in Japan have recently developed a polymer coating that when applied to a standard metal catalyst accelerates the electrochemical CO2 conversion.

In wake of their findings, the research team reports that the mantra “reduce, reuse, recycle” no longer has to refer to single-use plastics, explaining that the new catalyst coating technique could be used to develop systems that recycle CO2 into useful compounds, such as formate, which can power fuel cell devices that provide green electricity.

The study’s findings have since been published in ACS Catalysis.

To mitigate the effects that greenhouse gases have on our atmosphere, researchers looked into ways that CO2 could be captured or recycled, which in turn led them to develop a polymer-coated metal catalyst that accelerates CO2 conversion and offers green energy insights.

In their study, researchers explain that when coating a porous tin (Sn) catalyst with polyethylene glycol (PEG), the polymer is able to facilitate CO2 transformation into a useful carbon-based fuel. Various polymers can capture CO2 molecules, and Sn catalysts are known to reduce CO2 to other molecules, like formate (HCOO-), which can be reused to power fuel cells.

“We were interested in combining these capabilities into a single catalytic system that could scrub CO2 from its surroundings and recycle it into formate,” said research group leader, Professor Yoshikazu Ito. “However, it's difficult to obtain only the desired product, formate, at a high production rate and in high yield, so we had to fine-tune the catalyst design.” 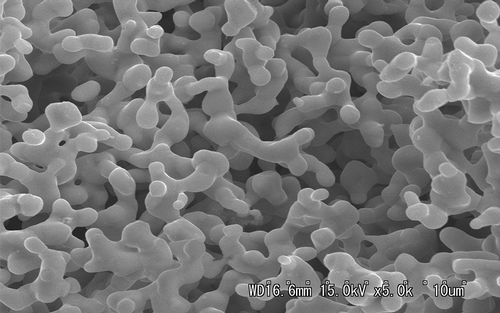 While in the testing phase of their research, the team found that the formate production rate of PEG-coated Sn was 24 times higher than that of a conventional Sn plate electrode. Additionally, no byproducts were detected (>99% yield of formate). To better understand the enhanced CO2-reduction reaction, the researchers fabricated an Sn catalyst coated with another CO2-capturing polymer (polyethyleneimine; PEI), whose structure interacts differently with incoming CO2.

As a result, the team discovered that the PEG-coated Sn still outperformed the PEI-coated Sn, and when considering the chemical characteristics of these polymers, proposed that PEI held the CO2 molecules too tightly, whereas PEG struck a key balance in capturing and then releasing CO2 to the catalytic Sn core.

The team concluded that by having a complete, but relatively sparse, layer of PEG is optimal for funneling CO2 to Sn, while maintaining a CO2-rich environment and preventing byproduct release.

Work for the research was sponsored by a JSPS Grant-in-Aid for Scientific Research on Innovative Areas “Discrete Geometric Analysis for Materials Design,” the JSPS KAKENHI, the Futaba Research Grant Program of the Futaba Foundation, KONDO-ZAIDAN, a cooperative program of the CRDAM-IMR, Tohoku University, the Open Facility, Research Facility Center for Science and Technology and the University of Tsukuba.

Earlier this month, researchers from GE Research, UC Berkeley and the University of South Alabama were awarded a two-year, $2 million project for the development of a 3D-printed system for capturing carbon dioxide.

The AIR2CO2 research project was awarded through the U.S. Department of Energy’s Office of Fossil Energy and Carbon Management. While the DOE’s award totals $1.5 million, GE and its University partners will be providing a $500,000 cost share.

According to reports, the research team will combine 3D-printed heat exchanger technology with innovative sorbent materials to develop a system for effectively extracting CO2 from the atmosphere.

In breaking down each team member’s role, GE will reportedly be focusing on both the 3D printing and heat aspects, given the company’s extensive background in metal 3D printing, manufacturing and heat exchanger and thermal technology development gained through its gas turbine platforms for the energy and aerospace sectors.

UC Berkeley is slated to focus on the developing and applying sorbent materials for use in the system. Led by Professor of Chemistry Omar Yaghi, the team is specifically seeking to develop a method to extract targeted elements—in this case, CO2—from the atmosphere.

Making up the last of the trio, the University of South Alabama team plans to provide support when it comes to material selection for the rest of the decarbonization system and will be led by Professor Grant Glover.

Founded in 2013 after seven years of independent research by founders GreenMag Group and Orica, MCi was awarded $6.08 million in grants from the Australian Commonwealth and NSW Governments. This was then matched by Orica for CO2 emission research.

In 2017, MCi won further Commonwealth Government funding totaling $8.3 million for a program to advance the pilot program towards industrial applications by taking CO2 from raw flue gas as a CO2 capture process path from cement and steel industries, as well as fossil fuel energy generators.

The company currently looking to commercialize its technology with other industrial customers and funders. MCi is headquartered in Canberra, Australia, whiles its research and technical facilities are located at the Newcastle Institute for Energy Research, where it operates its pilot plant facility.