Officials from the French government agency overseeing the reconstruction of France’s Notre Dame Cathedral have recently reported that efforts to secure the structure have reached competition.

The news arrives more than two years after the Cathedral caught fire, destroying its iconic spire and nearly two-thirds of the roof.

There were no initial reports about what had caused the blaze, though police said at the time that it appeared to be accidental and that the cause could be linked to the ongoing 6-million-euro ($6.8 million) renovations. Since then, though, investigators have said that they believe an electrical short-circuit was the culprit. 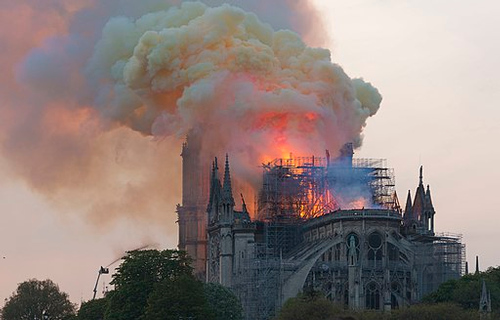 GodefroyParis, CC-SA 4.0, via Wikimedia Commons
With the help of about 500 firefighters battling the blaze, the fire was brought under control by the early hours of the following morning, five hours after the outbreak. Officials stated that no fatalities took place during the incident, and only one firefighter was reported to have experienced serious injuries.

On more dense surfaces like granite, workers used a special gel to coat the contaminated surface, which was left to dry for several days and was then removed, pulling out any lead particles that became embedded in the stone.

President Emmanuel Macron has specified that he wants the monument to be rebuilt in time for the 2024 Summer Olympics, slated to be held in Paris. To aid in achieving this goal, digital 3D scans taken by the late Andrew Tallon of New York’s Vassar College in 2015 are believed to provide the necessary information for fast-track construction.

If the scaffolding were to fall or collapse, it could reportedly put other parts of the building in jeopardy, so workers had to first build a structure above the scaffolding that would allow them to rappel down.

Delays included specialist artisan builders being sent home as France went on lockdown, as well as work being stopped before it began on the removal of the damaged scaffolding.

At the beginning of this year, new scaffolding was being erected as decontamination and cleaning continued ahead of restoration and rebuilding work.

One technology that workers are considering implementing is lasers. Chicago-based GC Laser Systems, led by art restoration expert Bartosz Dajnowski, was tested inside the structure in the fall.

According to a statement issued by the French government, negotiations are slated to begin regarding the Cathedral’s restoration. The announcement was made during the European Heritage Days celebrations, when historical landmarks, government buildings and other sites are opened to the public.

The negotiations will invite companies to bid on the reconstruction effort, which is expected to include some 100 different tenders for various projects.

Work on restoring the organ is expected to begin as early as this fall, while other works are expected to launch during the winter season.

Possible design changes for the cathedral’s spire were already being discussed just days after the fire, and French Prime Minister Edouard Philippe even launched a spire design competition, saying that instead of recreating the original spire, the city hoped to create a new design that is “adapted to the techniques and the challenges of our era.”

Farshid Moussavi, the founder of Farshid Moussavi Architecture (London), said that a new opportunity has been presented in bringing together talent and donations to rebuild Notre Dame, much like when the structure was originally built.

However, along with the cleaning update at the beginning of the year, aesthetic debate was still raging when a draft of plans was published in the French media. Some proposals included replacing the historic stained-glass windows in the chapel’s nave with more contemporary ones.

Other significant changes include furniture and different lighting, which prompted immediate dissent from members of the French public—so much so that the Archdiocese of Paris published a press release, restating that the ideas were only a draft with the intention on allowing visitors to better experience the cathedral.

In May, building software firm Autodesk confirmed in a press release that it will be helping Notre Dame Cathedral officials by contributing design and construction solutions to the rebuilding efforts, including BIM support and technical expertise.

According to the company, this partnership allows the conservation and restoration of the cathedral to enable cloud collaboration among stakeholders, making a common data environment that will be the central point for project information.

Some months later, in August, Boston-based Handshouse Studio, on the campus of the Catholic University of America’s School of Architecture and Planning, announced that it was using 800-year-old techniques to reconstruct one of the roof trusses for the structure.

The project is slated for be a “gift” to France.

“We study architectural history through drawings, photographs and onsite observations, but to study an important work of architecture by reconstructing it dramatically expands one's appreciation for the building and the people who created it,” said Mark Ferguson, the dean of Catholic University’s School of Architecture and Planning, whose students will be involved in the project. “[It] will bring people together from all walks of life to experience the joy and hard work of crafting a beautiful building.”

At the time of the announcement, all of the burned timber was reported to have been removed from the cathedral and scaffolding installation was completed.