To avoid metal and concrete corrosion, the IPCC is pushing for a global investment for climate change mitigation.

The IPCC is a United Nations body that possesses a mandate to report scientific research on human-induced climate change. For its research study, the IPCC reportedly undertook a wide-ranging review of relevant scientific literature.

The panel’s most recent findings have since been published in its Assessment Reports on climate change.

Since 1971, the IPCC attributes at least 50% of the rising sea levels to thermal expansion. Other contributing factors included melting glaciers (22%), melting ice sheets (20%) and changes in land water storage (8%). 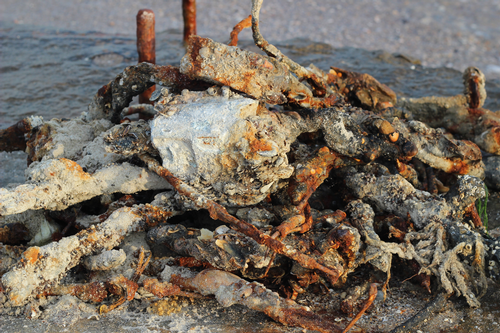 From the research gathered, the IPCC estimates that two-thirds of the Earth’s coastlines will rise by 20% more than the mean global increase. Additionally, due to these rising levels, the extreme sea-level floods that once occurred every century would start to happen annually in half of the outlined locations by as early as 2100.

The report went on to further outline the severity of potential saltwater corrosion, noting on the recent collapse of the Champlain Towers South condo building in Surfside, Miami. The tragic collapse was the result of saltwater corrosion experienced within the structure’s basement. In a 2018 inspection report, it was noted that the building was suffering from “abundant cracking and spalling in various degrees.”

“Spalling,” IPCC explained, is concrete degradation with noticeable crumbling or cracks forming. The cracks and crumbling are ultimately a result of saltwater intrusion within the structural concrete, introducing chloride ions to the reinforcing steel rebar inside, which corrodes and expands the metal, breaking the concrete around it.

While many different governments have highlighted plans to mitigate climate change and better protect coastal communities, the IPCC adds that regardless of CO2 emission reduction or even elimination, that the rising mean sea levels would continue to increase for hundreds of thousands of years.

The panel went on to report that its latest article was a part of the IPCC Editorial Series: Industrial Response to Climate Change, a collection of content exploring how different sectors are responding to issues highlighted within the IPCC 2018 and 2021 reports.

Earlier this month the Boston Planning and Development Agency announced plans for a new program to raise funds for a seawall to protect the city’s low-lying Marine Industrial Park from rising ocean waters.

Through the new program, city officials are planning to ask developers interested in building in the park to contribute to the cost of the seawall and other defenses that will protect not just the slated newbuilds, but also the remnants of the maritime industry that still operate there.

Dubbed the Climate Resiliency Fund, the program works much like other commercial developer programs that require a contribution for things such as affordable housing, park space or infrastructure upgrades. This program, however, focuses instead on contributions for various climate defenses.

According to the Boston Planning and Development Agency, construction of a protective seawall could cost the city up to $124 million. However, this number is only specific to the most urgently needed protections regarding a 191-acre area. The Boston Globe reports that in its current state, the area could begin to experience an uptick in flooding as soon as the 2030s and could be largely under water at high tide by the end of the century.

Previously, Boston’s Seaport District had required new developments to erect defenses such as flood barriers on their own properties. In another instance, the Suffolk Downs project has been landscaped to better manage flood waters.

In looking to the marine park specifically, Boston officials expect that developers will eventually cover about $40 million of the cost of improvements. The first new project that’ll pay into the fund—Marcus Partners’ conversion of the former Au Bon Pain headquarters on Fid Kennedy Avenue into a lab building—was recently awarded BPDA approval.

In receiving approval, the Marcus Partners has agreed to pay up to $250,000 per year toward climate defense in the neighborhood as part of the project.

According to reports, the signing of SB 1954 and SB 2514 will officially set aside hundreds of millions of state dollars over the next few years to fund flooding infrastructure projects and mediate rising sea levels, among other things.

As part of the legislation, the Department of Environmental Protection has been tasked with preparing an annual flooding and resiliency plan. The development of the plan requires the Department to compile data every five years to best determine the highest at-risk coastal communities. Environmental officials will also use this data to devise their first vulnerability assessment for flooding under sea level rise across the state. The assessments are slated to be updated every five years.

The new research hub for these data-compiling initiatives is planned to be situated at the University of South Florida’s College of Marine Science in St. Petersburg.

In addition, the DEP will also provide up to $100 million annually to local communities, in which submitted applications for government funding will be ranked by the Department. Much of the funding is expected to come from documentary stamp taxes, while lawmakers could redirect more than $100 million per year of that revenue from trust funds for affordable housing.

Although several environmental groups and legislators expressed support of the bills’ passing, some criticize that the actions were belated and still not enough to prepare these at-risk communities.

Earlier that spring, however, the City of Miami announced that it had completed its updates on its Stormwater Master Plan, a comprehensive assessment of the city’s roads, drainage infrastructure and water management features to identify improvements needed to address capacity and flooding issues.

The final plan covers nearly $4 billion in spending over the next 40 years in an effort to keep the city dry from rising seas, with some of its recommendations to be included in the city’s Capital Improvement Plan, which considers changing climactic patterns, sea level rise and the desire to strengthen the resiliency of Miami.