The Seattle Department of Transportation has recently reported that the final phase of repairs to the West Seattle Bridge are slated to begin next month.

For the final phase, crews will be getting expansion joints together, among other materials, and have plans to construct and install platforms along the bridge for final repair construction. While no timeline for the final phase of the project has been issued, the West Seattle Bridge Task Force is promising transparency throughout the process.

“I’m nothing if not an over-sharer and I promise, if there was something wrong, we would tell you right away. So, everybody please take note, we are 100% on schedule as of this moment,” said Heather Marx with the task force.

The remaining portion of the project has a price tag of nearly $55 million. Federal funding is expected to cover 70%.

Construction on the final phase is reportedly on schedule, with the Department determined to reopen the bridge by mid-2022.

The funding is also slated to be used on the Spokane Street Swing Bridge (“low bridge”), that runs adjacent to the structure.

According to The Seattle Times, Democratic Representative Pramila Jayapal first received the news from U.S. Transportation Secretary Pete Buttigieg, to whom she had spoken with about the bridge three or four times prior (not including staff messages). 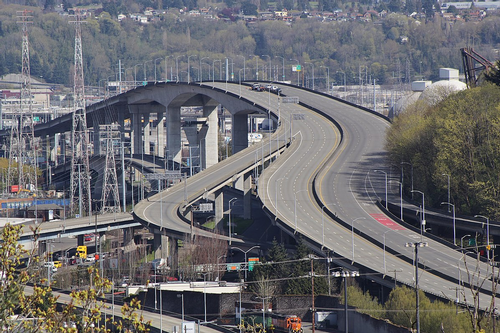 Sounder Bruce, CC-SA 4.0, via Wikimedia Commons
The Seattle Department of Transportation has recently reported that the final phase of repairs to the West Seattle Bridge are slated to begin next month.

The federal funding arrived through the Infrastructure for Rebuilding America (INFRA) discretionary grants program and is about half of the $21.6 million that the SDOT requested in its grant application back in March.

This year, the INFRA program was slated to award $889 million in funding nationwide.

The total $11,250,600 awarded will be used to provide structural stabilization repairs to reopen the High-Rise bridge and will make repairs related to load rating compliance on the low bridge. Overall project improvements will include replacement of damaged bridge decks, expansion joints, barrier segments and seismic restrainers.

Overall, the rehabilitation of the West Seattle Bridge and related projects is estimated to cost $175 million. Thus far, SDOT has reported that it has secured $125 million, which includes $16 million in federal funding.

In breaking down the project costs, $43.4 million is slated to cover post-tensioning of steel cables to tighten three of the structure’s concrete spans and $11.4 million is expected to cover girder strengthening and new rotating parts on the lower swing bridge.

Additionally, SDOT plans to spend millions more on emergency stabilization, bridge engineering studies, improved traffic signals, maintenance for detour routes, traffic-slowing humps on side streets and preliminary plans for a new high bridge. It is noted, however, that a new bridge won’t be needed for up to 30 years unless the ongoing repairs prove unsuccessful.

SDOT officials are hopeful that the newly awarded funding will reduce pressure on other projects within the city’s $608 million 2021 budget, or that higher city debt will be avoided.

Around the same time that the sensors were installed, Seattle Mayor Jenny A. Durkan requested a failure analysis of the structure so that emergency preparedness could be improved.

In late May, construction firm Kraemer North America was selected as the contractor for the job, officially putting the rehabilitation project in motion. While the Department reported that 2020 emergency measures have successfully halted the cracks from growing and that the structure is behaving as expected following additional stabilization efforts, it is ready to launch the project still ahead.