At the beginning of the month, the Texas Facilities Commission announced that they had completed the valuation phase for the Program Manager for the Border Wall.

In reviewing the competing contractors for the project, the Commission stated that they would be recommending the joint venture of Dallas engineering firm Huitt-Zollars and Pittsburgh-based engineering firm Michael Baker International.

According to the Washington Examiner, both companies have experience in building hundreds of miles of border wall projects under previous presidential administrations. Four total companies had expressed interest in the contract.

Starting back in March, Republican Texas House Rep. Bryan Slaton presented new legislation regarding the relaunch of construction on the U.S.-Mexico border wall and other border security enhancement projects within the state. 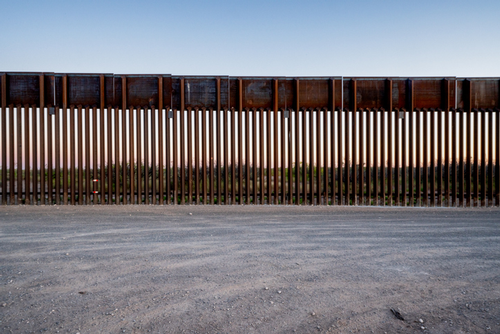 grandriver / Getty Images
At the beginning of the month, the Texas Facilities Commission announced that they had completed the valuation phase for the Program Manager for the Border Wall.

At the time of the announcement, Texas Gov. Greg Abbott stated that the upcoming initiatives included more than $1 billion in funding, already approved by the new state budget for border security. In addition, the creation of a task force on border security was also in the works, as well as intentions to sign an interstate compact with Arizona Gov. Doug Ducey that would call on states to assist in arrests by sending resources such as drones and helicopters.

In a report on the border’s illegal crossings, U.S. Customs and Border Protection data revealed a new 20-year high, with American authorities intercepting 180,034 migrants along the Mexico border that same month.

Later that month, Abbott was joined by Joined by Lt. Gov. Dan Patrick and more than two dozen Texas lawmakers, in signing off on the authorization of several actions to address illegal immigration—including the state-led border wall project—and aid overwhelmed border law enforcement.

By the end of May, Abbott issued a disaster declaration regarding the immigration crisis, which he plans to use to fund and construct the project. In addition, the project plans to receive funding through a crowdfunding campaign that asks citizens to donate.

As a result of Abbott’s efforts to secure the border, the TFC officially announced that it was seeking a project manager for the proposed border wall project in July. That month, the TFC was reported to be accessing the resource requirements to fulfill the project mandate and gathering information from partners across several state agencies to develop the scope of the request for proposal.

In August, the Texas Department of Transportation announced that it was set to pay nearly $25 million for the construction of a roughly two-mile-long concrete border barrier. Slated to be constructed in Eagle Pass, the project is also calling for a temporary fence near the right-of-way along State Loop 480, which the Department of Public Safety has reported to be a high-traffic area for immigration.

The Texas Tribune reported that the fence will cost the state $280,000, while the rest of the $25 million will be used to clear vegetation and construct the concrete barrier.

If costs remain consistent with the Eagle Pass barrier for TxDOT, it has been suggested that the total $250 million allotted for the border wall could build about 20 miles. However, the state of Texas is reported to have about 1,000 miles along its border where no barrier has been constructed.

The TFC recently announced the recommendation of JV Huitt-Zollars and Michael Baker International for the project manager role on the proposed Texas border wall.

As noted in the Generic Procurement Timeline posted to TFC’s website at the end of July, the Commission planned to announce a contract award approval sometime in August.

“In response to the Governor's directive, TFC introduces a strategic initiative in 2021 to construct TBW [Texas Border Wall] segments on state owned, local government owned, and privately owned property from El Paso to the Gulf Coast. The initiative contemplates sequencing multiple phases of development of the unsecured border over multiple years, with a goal to complete as much of the wall as possible in the shortest timeframe,” read the RFP posted by TFC.