Nominations Open for 2021 Tank of the Year

In an emailed press release, protective coatings manufacturer Tnemec Company Inc. announced that it was accepting nominations for its 2021 Tank of the Year Competition. The call for nominations was officially announced last week by Scott Keilbey, Sales Director – Water Tank Market.

The deadline to submit is Sept. 30.

“We look forward to another great year of recognizing the creative uses of Tnemec coatings on water storage tanks,” explained Keilbey. “It’s amazing how the contest has grown over the past decade; it has become a great way for communities to showcase their hometown pride” 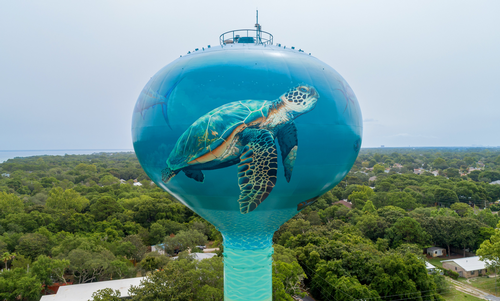 Nominations can be submitted electronically through the contest website. All styles of water tanks are eligible, however, nominated tanks must have been coated, or recoated, with Tnemec high-performance coatings in the last two years, and should be submitted with high-resolution photography.

Following the September deadline, all nominations will be posted from Oct. 5 through Oct. 16 for the People’s Choice voting. The People’s Choice tank will automatically be considered among 11 other Tnemec-determined runner-ups for the Tank of the Year award.

As carried out in previous years, a committee of Tnemec water tank enthusiasts will judge the finalists based on artistic value, significance of the tank to the surrounding community and challenges encountered during the project.

Last year, a municipal water tank in Destin, Florida, won Tank of the Year out over nearly 300 other water tank nominations and more than 23,000 online votes from across the United States and Canada.

The Destin tank was selected by a panel of water tank experts based on criteria such as artistic value, significance of the tank to the community and challenges encountered during the project.

The tank was coated using Tnemec’s UV-resistant, long-lasting fluoropolymer finish, Series 700 HydroFlon, which the company reports will help preserve the color and design for a long time, even in Florida’s hot and humid climate.

As winner of Tank of the Year, Destin’s tank was featured in Tnemec’s 2021 water tank calendar.

The first runner-up, a water tank in Bossier City, Louisiana, was painted to honor all military, police and fire department personnel and features a main logo that reads, “We Salute Our First Responders.” The Bossier City tank was also the was the winner of the People’s Choice competition, receiving 6,281 votes.

The tank project was also reported to use Tnemec’s UV-resistant, long-lasting fluoropolymer finish, Series 700 HydroFlon, and features the silhouette of a B-52 Bomber on top of the tank. The aircraft is regularly seen flying over the city given the city’s nearby Barksdale Air Force Base.