Earlier this summer, the U.S. Department of Labor issued a notice of proposed rulemaking to increase the minimum wage for federal contractors.

The proposal would require federal contractors to pay workers at least $15 an hour by 2022 and looks to enforce another recent executive order.

Back in April, the White House reported that President Joe Biden had signed Executive Order 14026, “Increasing the Minimum Wage for Federal Contractors,” which aims to promote “economy and efficiency in federal procurement by increasing the hourly minimum wage paid by the parties that contract with the federal government to $15 for those workers working on or in connection with a federal government contract.” 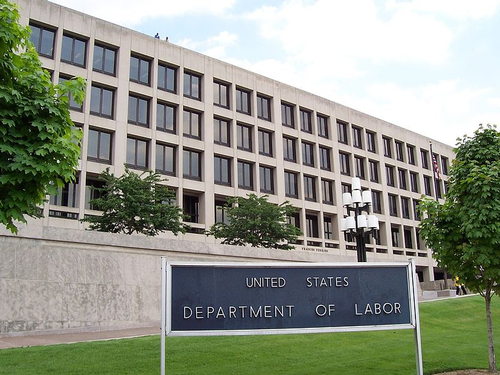 Ed Brown, public domain via Wikimedia Commons
Earlier this summer, the U.S. Department of Labor issued a notice of proposed rulemaking to increase the minimum wage for federal contractors.

The DOL further specifies that eligible workers include apprentices.

Other updated procedures and enforcements in the EO 14026 include:

The executive order directs the Secretary to issue regulations by Nov. 24, consistent with applicable law, to implement the order’s requirements. The proposed rule was published in the Federal Register on July 22. The comment period for the proposed rulemaking reportedly closed last week on Aug. 27.

At the beginning of the year the DOL announced a final rule meant to clarify the status of independent contractors under the Fair Labor Standards Act.

The rule took effect on March 8.

In June, the Labor Secretary Marty Walsh revealed that the Department of Labor would again be reviewing the current overtime threshold under the Fair Labor Standards Act. Walsh reportedly noted that the current threshold, which is just under $36,000 and was finalized in 2019, is “definitely” too low.

Reportedly, the department will include in its review whether regular, automatic updates to the threshold are necessary, which Walsh supports.

According to a DOL official, no changes are slated to be made to the FLSA’s duties test and no time frame has been established for any automatic updates to the overtime eligibility threshold beyond what is already included in the final rule.