Last week, the U.S. Department of Commerce’s National Institute of Standards and Technology announced its selection of a team of technical experts to investigate the partial collapse of the Champlain Towers South condominium in Surfside, Florida.

“In response to the tragic events at Champlain Towers South, an accomplished team of experts has answered the call to help us determine the likely cause or causes of the partial collapse,” said James Olthoff, who is performing the nonexclusive functions and duties under the secretary of commerce for standards and technology and the NIST director. “I’m confident this team will work tirelessly to understand what happened in Surfside, and to make recommendations that will improve the safety of buildings across the United States to ensure a tragedy like this does not happen again.”

Around 1:30 a.m. on June 24, part of the Champlain Towers South was reported to have collapsed. Made of up of three buildings, the towers were each 12 stories tall and contained 342 units.

That Sunday, heavy equipment was sent to the scene to help manage the shifting debris after rescuers dug a 125-foot-long trench (20 feet wide and 40 feet deep) to add to the round-the-clock excavation effort.

According to NIST, the technical investigation will be organized around specific projects that will seek to understand the full history of the building, including its design plans, construction, materials, modifications, site and environment, from its design to the moment of collapse. 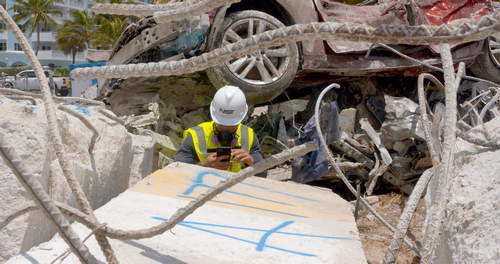 NIST
Last week, the U.S. Department of Commerce’s National Institute of Standards and Technology announced its selection of a team of technical experts to investigate the partial collapse of the Champlain Towers South condominium in Surfside, Florida.

The investigation team will be headed by Judith Mitrani-Reiser, Associate Chief of the Materials and Structural Systems Division in NIST’s Engineering Laboratory. In her role, Mitrani-Reiser will lead the development and coordination of statutory processes for making buildings safer.

“This team has an incredible amount of experience in forensic engineering, having studied many building failures,” said Mitrani-Reiser. “We are going into this with an open mind and will examine all hypotheses that might explain what caused this collapse. Having a team with experience across a variety of disciplines, including structural and geotechnical engineering, materials, evidence collection, modeling and more, will ensure a thorough investigation.”

Full biographies of the team members and descriptions of each project can be found on the NIST Champlain Towers South investigation webpages here. NIST notes that projects and team members could be added as needed.

Throughout the investigation, the team is slated to provide regular updates on its progress during the investigation, which will include public meetings with the NCST Advisory Committee, annual reports to Congress and progress reports. However, the NIST reports that it will not issue preliminary findings or conclusions before publishing a draft report for public comment.

Among the speculation that was looking at how a partial collapse of a patio could have brought down part of a 12-story building, the Washington Post also brought together engineers, construction plans and a computer simulation to come to two main scenarios.

Last month, in Miami-Dade County, where the municipality is currently undergoing its 40-year recertification process, officials reportedly displaced hundreds of apartment building residents over safety concerns since the collapse.

According to Miami’s Local 10 News, the collapse caused a ripple effect among residents in condominium buildings who already had maintenance concerns. After many calls and demands for property inspections, some concerns were deemed unfounded and others led to the evacuations.

For example, about 300 residents at Crestview Towers at North Miami Beach were evacuated after officials found a Jan. 11 engineers’ report that warned of safety concerns. A two-story building in South Beach was also evacuated after a flooring system failure and excessive deflection of an exterior wall was found.

Moreover, the collapse in Miami led to structural and inspection concerns throughout the country. Most notably, it renewed worries about San Francisco’s leaning (and sinking) Millennium Tower, forcing professionals to step in and dispel concern.

Khalid Mosalam, a professor of structural engineering at UC Berkeley, went on the record and pointed to the differences in climate between Miami and San Francisco, as well as the age of the buildings and the differences between high- and mid-rise structures, to name a few.

However, there’s no denying that the Millennium Tower needs monitored, particularly as it undergoes its $100 million “fix,” which is slated to be completed next year.