Nominations are now open for the annual Prestige Awards program, which recognizes the top people, products and projects in the industrial coatings field.

New this year, the 2021 Prestige Award process will be promoted in the pages of JPCL—including a feature on the award winners later in the year—presenting an exciting opportunity for recognition in the industry’s premier print publication.

“Not only does this make the potential audience for this year’s Prestige Awards coverage bigger than ever, but we at JPCL hope that our print coverage will help expand the pool of nominations, as well,” said Charlie Lange, Editor-in-Chief of JPCL. “Our panel of industry-leading judges look forward to reviewing what we hope will be a deep field of nominations from the many different sectors of the industry.” 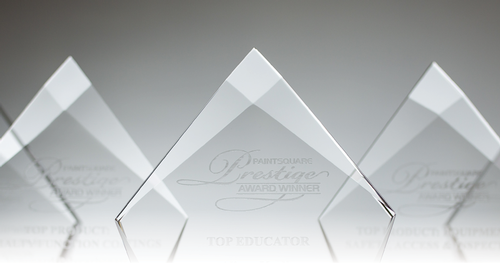 
Nominations are now open for this year’s awards for outstanding projects completed between March 2, 2020, and March 1, 2021. The deadline is Oct. 1. Categories for this year are as follows:

The Top People honors will be awarded in three subcategories:

Each will be judged on a set of criteria that includes the following.

Top Innovations will be awarded in two categories: coatings and equipment. In order to be eligible for this honor, the product must have been brought to market between January 2020 and January 2021. Companies may nominate their own products or those from other companies.

Winners will be chosen based on the following criteria.

The Prestige Awards will also honor individual coating and equipment products nominated by the PaintSquare audience. Categories for the Top Product awards will include the following.

The Top Project category will recognize the players involved in a notable industrial protective coatings project completed during the year. This project may employ some of the nominated Top Products and Innovations, or involve some of the Top People chosen by the industry. Projects can be submitted from the Bridge and Highway, Water and Wastewater, Marine and Energy (including oil and gas production) sectors.

Project nominations should include details about the project and companies involved, as well as project photos.