Recently, New Jersey Governor Phil Murphy signed a new bill into law, requiring that hundreds of public water systems in the state have their inventories taken for lead pipes so that the infrastructure can officially be replaced.

The catalog and replacement efforts are slated to take place over the next 10 years.

“This is a crisis that has been building for decades, and in some cases, centuries,” Murphy said, noting that two-thirds of housing stock in New Jersey predates 1980, several years before lead-based solder was banned in plumbing.

According to Sean Jackson, CEO of Isles, a Trenton, New Jersey-based nonprofit community development and environmental organization, more than 225,000 children in the state were diagnosed with elevated blood lead levels between 2000 and 2015.

Later, in 2019, the health issue made headlines as Newark announced a new program to replace nearly 20,000 lead service lines. At the time, Trenton was also identifying lead lines with the intention to replace them as well. However, with the COVID-19 pandemic preoccupying government and residents alike over the last year and a half, lead remediation declined in visibility.

To date, the project has been reported by ABC7 to have replaced nearly all of the 20,000 lead pipes in three years’ time. The city has also been able to secure financing through the Essex County Improvement Authority, as well as the Port Authority, for the ongoing project. 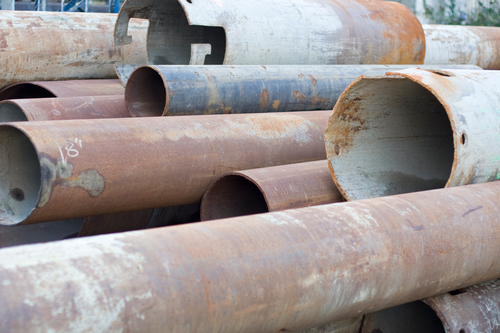 carterdayne / Getty Images
Recently, New Jersey Governor Phil Murphy signed a new bill into law, requiring that hundreds of public water systems in the state have their inventories taken for lead pipes so that the infrastructure can officially be replaced.

In public record collections requested by the Department of Environmental Protection, it was revealed that responses from about 450 of the systems, about 850,000 pipes were made of unknown substances. Of those, however, about 145,000 were confirmed to have used lead or galvanized metals.

The DEP records identify about 960,000 lines for replacement—a category that includes the unknown lines.

As part of a three-bill package, Gov. Murphy is requiring that all water systems—private or publicly owned—will be required to replace its lead pipe infrastructure. The signing arrives almost two years after the governor pledged to remove the danger of lead in New Jersey.

The endeavor is estimated to cost about $2.65 billion and requires that the water companies pay to cover their own replacements.

However, Gov. Murphy has highlighted that the companies will be permitted to raise rates on property owners to pay for the pipe replacements, though it's possible federal funds—such as what’s been outlined in President Joe Biden’s infrastructure package—could help cover the expenses as well.

Additionally, some believe that the replacement expenses could derive from the issuance of bonds by both municipal and county authorities.

New Jersey is the first state in the country to provide a definite timeline for lead pipe replacement. While the cut-off is 10 years, the legislation allows for a five-year extension if needed.

“Our goal is nothing less than having every single lead water service line across New Jersey replaced within the next 10 years,” Murphy said. “That's not going to just be wishful thinking. It's going to be an achievable and an affordable reality. We're going to ensure that every water service line that contains lead is properly catalogued and then removed.”

In other bills included in the legislation package requires inspections at rental properties for lead paint and the removal of certain restrictions to allow towns and water companies to finance the pipe replacements.

At the beginning of the year, the U.S. Environmental Protection Agency announced that it had reached a consent agreement with the City of Pittsburgh and the Pittsburgh Water and Sewer Authority over various stormwater inspection and enforcement violations.

Under the agreement, the city and PWSA are required to adhere to a schedule of corrective actions to address the issues.

The settlement arrives nearly two years after Pennsylvania Attorney General Josh Shapiro filed 161 criminal charges against the PWSA, alleging that the authority had failed to notify residents of when lead pipe replacements would be occurring, and failed to sample water within a specified timeframe after the pipes had been replaced.

According to the Associated Press, the charges were a breach of Pennsylvania’s safe drinking water law. Previously, the PWSA admitted civil liability; state regulators fined the authority $2.4 million.

At the time of the filing, the PWSA was already under a mandate to replace at least 7% of its lead lines every year. The PWSA issued a report in mid-January noting that 2,825 lead service lines had been replaced since July 2016. The 2019 program for lead line replacement was budgeted at $49 million and was slated to see the replacement of over 3,400 lead lines.

However, prosecutors found that in 2016 and 2017, the authority replaced lines without providing necessary advance notice. (The law mandates that customers are warned ahead of time and are provided with information on how to minimize exposure to lead.)

The PWSA estimated that it needed to replace 1,341 lead lines by June 30, 2017, to meet the 7% requirement advised by the Pennsylvania Department of Environmental Protection. The PSWA noted that it had not provided several residents with notice, along with failing to collect the necessary water samples within 72 hours.

In November 2017, the DEP fined the authority $2.4 million, entering into a civil consent order and agreement, going on to refer the matter to the Office of the Attorney General.

If convicted, the fine for each of the 161 counts is a maximum $12,500. Shapiro noted that charges were being filed against the Authority as an entity, because there was no evidence of a single person intending harm to those using the system.

A month after the charges were announced, PWSA began opening street hydrants and flushing water mains in the anticipation of adding orthophosphate to the water supply, an additive often used to control the release of lead and copper. However, PWSA spokesperson Will Pickering noted that it could take several months before seeing a reduction in lead water levels.

A little over a year later in May, the Allegheny County Sanitary Authority (ALCOSAN) announced that its $2 billion plan to remove seven billion gallons of stormwater and sewage from rivers and streams in the county was approved by the United States District Court for the Western District of Pennsylvania.

Through the modified plan, ALCOSAN intends to eliminate all illegal sanitary sewer discharges into the region’s rivers and streams and reduce sewage and stormwater overflows from 153 combined sewer outfalls by 85%. To achieve this, the plan has proposed the construction of over 15 miles of underground 14-foot-diameter storage tunnels along the city’s rivers.

In terms of lead paint abatement, also at the start of the year, the EPA announced the final rule to lower the clearance levels for the amount of lead that can remain in dust on floors and windowsills after lead abatement.

The standards have been incorporated into the Section 402/404 lead-based paint activity regulations as well as the Section 1018 real estate disclosure regulations.