Created in collaboration with the Texas Military Department, the Camp Swift Training Center is being touted as the largest 3D-printed structure in North America.

“Guardsmen from all over Texas come to Camp Swift to train and to mobilize for deployments,” said Col. Zebadiah Miller, Director of Facilities, Texas Military Department. “The printed barracks will not only provide our Soldiers a safe and comfortable place to stay while they train, but because they are printed in concrete, we anticipate them to last for decades.”

According to ICON, the project resulted from a SBIR Strategic Fund Increase (STRATFI) contract through the AFVentures—which was partially funded by the Texas Military Department. Through the contract, the two entities utilized USAF in-house innovation incubator AFWERX to create “barracks of the future” using construction-scale 3D-printing technology.

For the project, ICON used its next-generation Vulcan construction system and proprietary construction material. However, the barracks themselves were designed by Logan Architecture with structural engineering by Fort Structures. 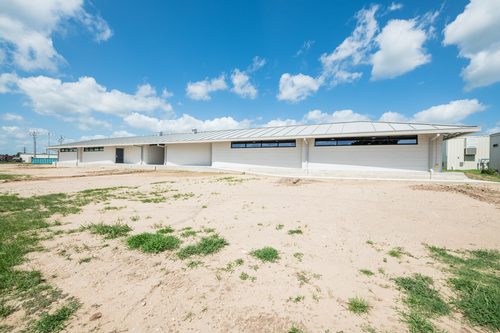 Encompassing 3,800 square feet, the building is set to house up to 72 soldiers or airmen at their primary facility while they train for missions in Texas or overseas.

The company reports that the proprietary technology provides a new option for the U.S. Military to leverage commercial additive manufacturing to produce safe, strong and energy efficient structures at speed and with design freedom for our soldiers at home and overseas.

Part of ICON’s mission is to produce housing and building structures in a more sustainable and efficient way. In this use case, 3D-printed barracks have the potential to replace temporary barracks that have gone beyond their lifespan.

“It is an honor for the ICON team to work alongside TMD, AFWERX and the Defense Innovation Unit to have created these resilient, energy efficient 3D-printed barracks that soldiers can now call home during their training,” said Evan Loomis, co-founder of ICON. “ICON continues our missional work to deliver dignified, resilient shelter for social housing, disaster-relief housing, market-rate homes, and now, homes for those serving our country. We are scaling this technology across Texas, the U.S. and eventually the world. This is the beginning of a true paradigm shift in homebuilding.”

“Texas has become a technological center of gravity within the nation,” said Maj. Gen. Tracy Norris, Adjutant General of Texas. “TMD is proud to be a conduit for introducing these innovative solutions into the military community.”

The 3D printing process is currently being evaluated for suitability as an expeditionary solution to enable printing of facilities in forward deployed locations, potentially reducing time, cost and construction risks.

Back in 2018, the Additive Manufacturing Team at Marine Corps Systems Command, working in collaboration with Marines from the I Marine Expeditionary Force, used a 3D printer to create a 500-square-foot barracks hut in 40 hours.

According to Capt. Matthew Friedell, AM project officer in MCSC’s Operations and Programs/G-3, the kind of undertaking was a first: “People have printed buildings and large structures, but they haven’t done it onsite and all at once. This is the first-in-the-world, onsite continuous concrete print.”

Beginning with a computer-aided design model, the team used the 3D printer over the next day and a half to create the barracks. The printer had to be consistently monitored and refilled with concrete; though, according to Friedell, if a robot were present to take care of the concrete, the project would only have taken a day.

Normally it takes 10 Marines five days to build a single barracks unit made out of wood. When using the 3D printer, a similar structure could be completed in less than two days. Since the Marines are often the first military service onsite after a natural disaster, a 3D printer could be used to quickly create shelter, schools and community buildings to replace what had been destroyed.

In December 2019, Boston-based company Apis Cor announced that it had completed what it touted as the largest 3D-printed building in the world—in 21 days. The structure is a two-story administrative governmental office building in Dubai. It was built using just one mobile printer.

The structure is 31 feet tall, covering an area of 6,889 square feet. According to reports, the walls were printed, while other aspects such as insulation, roofing, foundation and windows were installed via traditional methods.

The printing materials was a proprietary mixture of components such as sand, cement and gypsum. The entire cost of the project was not released.

More recently, in February of this year, New York-based construction technology company SQ4D Inc. listed for sale a 3D-printed home that it says is the first slated to receive a certification of occupancy in the U.S.

The residential property, which was printed onsite with the company’s Autonomous Robotic Construction System, is listed on MLS for sale as new construction for $299,999, in Riverhead, New York.

The 1,400-square-foot home (plus 750-square-foot garage) offers three bedrooms, two bathrooms and features an open floor plan. The building material listed reads as insulated concrete forms and SQ4D notes that the home includes the same 50-year warranty that the company puts on all of its 3D-printed structures.

The ARCS technology reportedly built the footings and foundations as well as the interior and exterior walls, and the company notes that it’s a step in its mission to help aid in the affordable housing crisis.

The company reportedly has other plans being reviewed elsewhere in New York, as well as California.