Swedish multinational power company Vattenfall has recently developed what it’s calling a “climate-smart hydropower concrete” that can reportedly use less cement, reducing its overall carbon dioxide emissions by about a quarter.

The company reports by reducing its cement content in structural concrete, there is a direct reduction in the strain on what otherwise would be inputted to the environment. To achieve this reduction in cement quantity and heat development, Vattenfall is using by-products that react with cement in combination with lessons learned from the company’s major periods of expansion in the 1950s and '60s to develop a modern, climate-smart concrete concept.

In wake of the development, Vattenfall is planning to utilize the climate-smart hydropower concrete to replace parts of an existing dam at its Lilla Edet power station in Göta älv near Gothenburg, Sweden. The company plans to complete the dam replacement project by 2024.

“Various methods have been investigated to reduce the amount of cement in structural concrete, thereby reducing both the burden on the climate and the need for cooling that comes with large concrete structures,” Vattenfall wrote. “Extensive tests have been carried out to ensure that the concrete is suitable for construction works and, above all, meets the requirements for dam safety and durability for over 100 years from now.”

However, by reducing the amount of cement required in creating a concrete structure, Vattenfall found that temperature increases were lower than usual, and mostly eliminated the need for post-cooling treatments. For the study, temperature monitoring and strain during hardening of the concrete was done using fiber optic measurements in collaboration with Chalmers University of Technology. 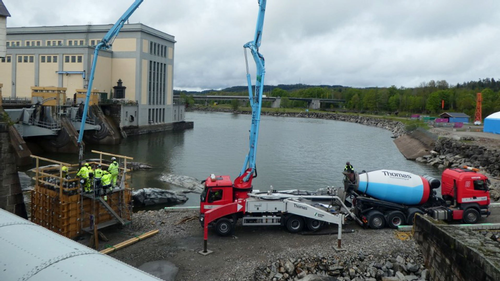 Vattenfall
Swedish multinational power company Vattenfall has recently developed what it’s calling a “climate-smart hydropower concrete” that can reportedly use less cement, reducing its overall carbon dioxide emissions by about a quarter.

“The objective was to define a climate-smart concrete concept that is ready to be implemented at the start of the construction works,” said Erik Nordström, Development Engineer at Vattenfall R&D. “This is as long as a maintained or extended service life can be assured for the structures and that it´s a robust concrete concept from a production point of view without any disruption or cost increases in the construction phase.”

In addition, working environments could also benefit in that construction workers would no longer be forced to work within tight, narrow spaces because of cooling pipe installations.

According to Vattenfall, the demonstration casting went excellently without pump stops and the concrete workers were very pleased.

Due to the success of the study and demonstrations, the company is planning to use the concrete concept in other application areas, such as wind power, although some adjustments would have to be reviewed for the composition of the concrete.

“You could use this concept when, for example, casting wind power foundations, although the actual composition of the concrete would then probably need to be slightly adjusted to suit the specific exposure environment,” concluded Nordström.

Like many other companies and countries, even, climate change initiatives are both surfacing and being redefined as the world aims to tackle its carbon footprint. At Vattenfall, the company is looking to enable fossil free living within one generation.

Not alone in their efforts, in New York, legislature recently passed a bill that is designed to promote the use of low-carbon concrete for state construction projects. Bill S542A requires the Office of General Services to establish guidelines concerning the procurement of low-carbon concrete for state projects. Contractors would need to follow these guidelines and certify that their materials meet guideline targets.

The bill also outlines that the office will need to examine when crafting said guidelines such as incentives—as a tax credit that was initially associated with the bill was removed in the final version that passed. (New Jersey, meanwhile, is looking at similar legislation that still includes a tax incentive.)

The office would then be awarding future contracts to companies based on these climate performances as well as price.

The state maintains that the bill is a crucial step toward its net-zero emissions economy goal by 2050, which was passed in 2019.

In June, Australian clean technology company Mineral Carbonation International (MCi) announced its own intentions to capture industrial carbon emissions to transform into useful materials. The company currently looking to commercialize its technology with other industrial customers and funders. MCi is headquartered in Canberra, Australia, whiles its research and technical facilities are located at the Newcastle Institute for Energy Research where it operates its pilot plant facility.

And most recently, earlier this month, Norway launched work on what it’s calling “Project Longship”—a 1.7-billion-euro ($2.01 billion) project that plans to bury up to 1.25 billion tons of captured carbon dioxide under the North Sea.

In a white paper on the project, the Norwegian government reported that in December 2020, there was no sufficient incentives in the current market to implement, nor develop CCS. “This is in part due to high investment costs, low-income potential in the short term and high risk,” the document read. “In addition, the price of emitting greenhouse gases is lower than the cost of CCS, and the development of technology may have the characteristics of a public good.”

Another industrial partner involved with the CCS project, Heidelberg Cement, plans to convert its cement factory into a carbon-neutral plant, where it will capture all of its carbon emissions and covert them into liquid for underground storage.

Phase one of the project is expected to be completed by 2024 and plans to have a capacity of 1.5 million tons per year. The project aims to kickstart the CCS market by developing technologies and lowering the cost of capturing and storing atmospheric CO2.