According to recent reports, construction on the Braila Bridge over the Danube River in Romania is now over 55% completed.

The structure is projected to be Romania’s longest and Europe’s third longest suspension bridge.

Developed for CNAIR, a state company headed by the Romanian Ministry of Transport and Infrastructure, the bridge contract—which includes the design and construction of a suspension bridge with four lanes, emergency lanes and pedestrian and cycle paths—is worth approximately 485 million euros ($572 million). 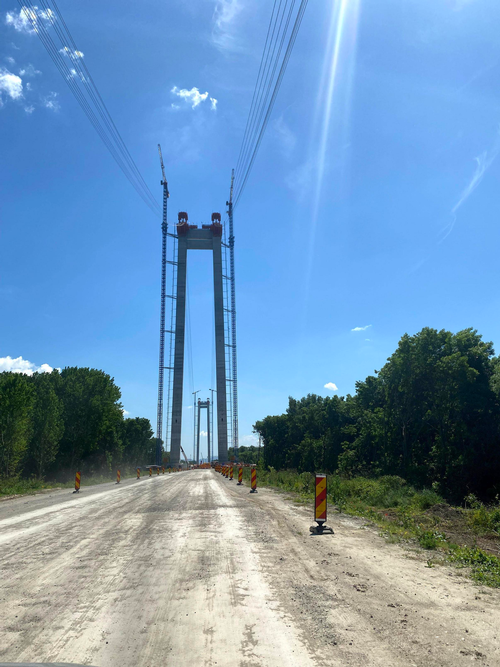 RaduG, CC-BY-SA-4.0, via Wikimedia Commons
According to recent reports, construction on the Braila Bridge over the Danube River in Romania is now over 55% completed.

On both sides, two 110-metre-long access viaducts will also be built, in addition to the construction of approximately 21 kilometers (roughly 13 miles) of connecting roads. Works are included in Romania's Transport Master Plan and are financed with dedicated EU funds (POIM - European Program).

According to the Romania Insider, construction on the project broke ground in 2019.

The contractor building the bridge is Italian company Webuild the Braila Bridge, and includes subsidiary Astaldi, which has a 60% share in the joint venture with Japanese partner IHI for Romania’s Ministry of Transport. IHI has previous experience in super-long suspension bridges having completed the world’s longest suspension bridge in the form of the Akasha Kaiko in Japan.

Currently, preparatory activities are now under way to build the bridge's two main cables, which will consist of 40,000 kilometers—equivalent to the Earth’s circumference—of intertwining steel wires. The deck has also been constructed in segments at the Fincantieri Infrastructure plant (the Webuild partner that also built Genoa's San Giorgio Bridge). The deck pieces are slated to be transported by river via barges to the bridge’s construction site.

Once completed, the Braila Bridge will measure a total length of 1,975 meters and a central span of 1,120 meters in length.

The bridge is expected to reach competition by the end of 2022.

As aforementioned, WeBuild was also responsible for the construction of the Gerald Desmond Bridge in Long Beach, California. In December 2017, the first cable-stayed bridge to be built in the state reportedly reached a milestone with the topping-out of its two 515-foot-tall towers.

The new bridge measures 8,800 feet long in total, with a main span of 2,000 feet. The deck, at 205 feet above the water, will reportedly be the highest of any cable-stayed bridge in the U.S., to allow for large ship traffic in the harbor.

Each tower of the bridge will be connected to the deck with 40 cables, each cable comprising between 30 and 80 strands. The longest cable, according to project materials, will be 573 feet long.

The following year, it was announced that the bridge would be used to monitor seismic activity. What makes the bridge the ideal candidate for using these sensors is its location—the span is just a few miles from two active faults, Newport-Inglewood and Palos Verdes.

Data recorded by sensors built into the design will be sent via the state's Integrated Seismic Network to scientists working at state offices in Sacramento, and also sent to the University of California, Berkeley, as well as Pasadena's California Institute of Technology.

The agency’s Strong Motion Instrumentation Program will be among those monitoring the data, which will be added to the state’s collection of information regarding earthquakes.

And last year, previous U.S. transportation secretary Elaine L. Chao announced that the project had been approved for a $500 million loan under the Transportation Infrastructure Finance and Innovation Act.

The granted $500 million TIFIA loan replaces a previous $325 million TIFIA loan which closed in 2014. However, the 2014 loan remains undrawn. USDOT reported at the time that, “The principal amount has been increased to assist the Port with additional costs arising from the implementation of more robust design and lifecycle features.”

The Port of Long Beach intends to repay the loan through revenues generated by the Port’s operations, including long-term property and rental agreements, among other revenue sources.

While the project’s timeline was delayed and its total cost increased along the way due to some seismic activity accommodating redesigns, in addition to oil and gas pipelines extraction, the project was slated to reach substantial completion by July 2020.

Another project completed by WeBuild was Italy’s Genoa San Giorgio Bridge, which officially opened to the public in August of last year. The structure replaces the Morandi Bridge, which collapsed almost two years ago to the day, killing 43 people.

According to reports, the design involved having a 3,600-foot-long main steel deck running across 20 spans, supported by 18 elliptical reinforced concrete piers placed at 164-foot increments. The exception was a set of piers that would be set 328 feet apart to account for the Polcevera River. Solar energy stored during the day is slated to power the bridge’s lights and lamps at night, which will cast light shaped like a ship’s sails.

Steel elements for the project were also provided by Fincantieri, from its Genoa-Sestri Ponente shipyard, with work being distributed to other shipyards, as necessary. The steel deck was assembled in parts onsite.

Additionally, to ensure the tragedy never repeats, the bridge has also been equipped with its own monitoring system and a fleet of robots which will monitor the hull, should any alarming structural changes occur.

The structure has been designed to last at least 100 years.