In recent experiments conducted at Australia's sovereign-owned submarine sustainment and maritime services company, ASC, researchers have found that a new type of surface coating can eliminate marine biofouling, or sea organism growth, on the hulls of naval vessels and other submerged surfaces.

According to reports, the effects of marine biofouling cost billions for shipping companies and navies worldwide each year. ASC reports that fully developed “biofouling community” growing on a ship’s hull, can cause up to 40% more fuel consumption, due to the additional hull drag and poor maneuverability.

In addition, the biofouling can also lead to obstructions in key areas of the hull that can be time consuming and expensive to clear. 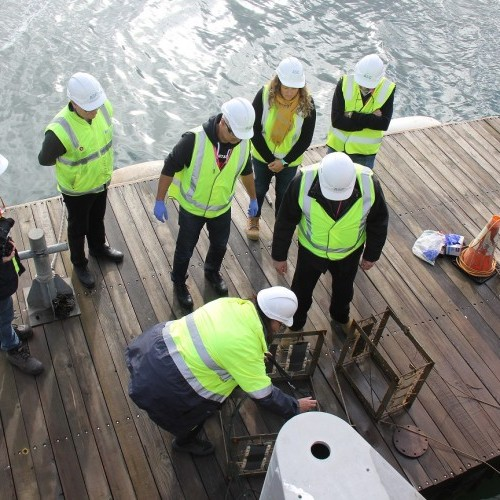 ASC
In recent experiments conducted at Australia's sovereign-owned submarine sustainment and maritime services company, ASC, researchers have found that a new type of surface coating can eliminate marine biofouling, or sea organism growth, on the hulls of naval vessels and other submerged surfaces.

“Warships and submarines use sea water in the cooling systems of propulsion and weapons systems—even air conditioning. Making sure the inlet valves, which let that water in, don’t become clogged with marine life, is a priority,” ASC Principal Development Engineer – Materials, Mikael Johansson. “This research could lead to protecting various parts of the Collins Class submarine hulls, leading to fewer interruptions to naval operations and less maintenance.”

“Our tests have shown that fouling can be significantly reduced and, in some cases, completely eliminated on the surfaces that are coated with a conducting paint and subject to electrochemical stress,” said Andersson. “To be honest, we are surprised that it works so well. As far as we know, there isn't a lot of this research being done around the world and while our research is specific to the Port River in Adelaide, it could be applied to any surface that is submerged in the ocean.

The “active anti-fouling” experiments were tested on a range of materials, coatings and electrical cycles, which were then compared against non-electrically stressed samples.

To provide an environmentally friendly antifoulant option for nets used in fish farming, researchers based out of Kiel University (Kiel, Germany) recently looked to polymer coatings as an alternative—an endeavor that aims to create a coating specifically adapted to the demands of nets in water.

The project, known as CleaNet and started April 1, 2019, and was developed in cooperation with Phi-Stone AG (Kiel, Germany) and in collaboration with net manufacturer Mechanische Netzfabrik Walter Kremmin GmbH & Co. KG (Oldenburg, Germany).

Aside from acting as a deterrent to keep marine life from attaching to fishing nets, CleaNet also aims to help alleviate the associated mechanical strain that can cause tears in netting, releasing farmed fish back into the ocean.

In developing the coating, the team accounted for external influences, such as current and UV radiation, and its impact on the product. At the time, the team was also working on developing a coating process that was appropriate for the production and composition of commercial nets.

Moving forward, real-world testing was slated to be carried out at a Kiel fish farm, and climate testing for long-term coatings conducted with Phi-Stone. The research project received financial support from both the Federal Ministry for Economic Affairs and Energy and the Central Innovation Programme for SMEs.

For the Technology Award, NPMC was awarded for its Aquaterras antifouling paint. The innovative paint was originally nominated in March 2020.

According to Nippon, Aquaterras is the world’s first biocide-free ship bottom antifouling paint developed using a technology unique to Nippon Paint Marine. Not only does the coating have properties of reducing the friction resistance and cutting fuel consumption by around 10%, but it has no biocide addition. This is in part to its hydrophilic and hydrophobic micro-domain structures that can significantly reduce the frictional resistance of hull through hydrolytic reaction and prevent adhesion of marine organism on the surface.

The coating is reported to be a great contribution to reducing the burden on the marine environment and contributes to safety and health and environmental protection.

NPMC plans to continue to tackle environmental issues faced by society through research and development of hull coating products that can constantly support comfortable and efficient vessel operations.