Officials behind what will soon be the tallest mass timber building in the United States are saying that construction is on schedule at Intro Cleveland, a mixed-used building in Ohio.

The space is slated to open to the public in February 2022 and is slated to host at least some of next year’s NBA All-Star festivities, with residents moving in soon after.

The $150 million structure, which replaced an old strip mall, is slated to host about 300 apartments, ground-floor retail space and a top-floor event venue. Reportedly, about 80% of the 36,000 square feet of the ground floor already has tenants committed.

Reportedly, the timber used for the project is blond hem-fir and spruce trees harvested in the Austrian Alps. The structure was designed by Hartshorne Plunkard Architecture of Chicago. 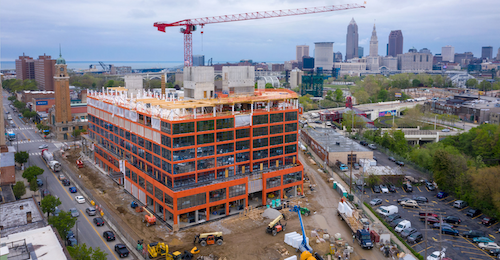 James Litwin, Vice President of Construction for, Harbor Bay Real Estate Advisors LLC, the Chicago-based company behind the project, noted that while the timber is costing about $38 a square foot in comparison to $35 for concrete, the speed that workers are able to move on the job is making up for that cost difference.

Harbor Bay chose to have its mass timber components manufactured and shipped via containers from Binderholz GmbH, based in Austria, also because of costs.

The project is aiming for LEED Gold certification.

While Intro Cleveland will hold the title for tallest U.S. mass timber building, it will only do so for a short period of time, as a Milwaukee project, dubbed “Ascent,” is slated to complete next summer.

Construction began on the 25-story Ascent last September. Upon completion, that tower will stand 284 feet tall and house 259 apartment units, along with retail, parking, a swimming pool and fitness center.

Proposed in October 2018, the initial design of the high-grade timber-based mixed-use tower involved 21 stories and was predicted to be one of the tallest buildings in the world of its kind, according to its developer, New Land Enterprises LLP (Milwaukee).

The then-predicted 238-foot tower would feature laminated timber—columns and beams created by pressing layers of wood together—encompass 410,000 square feet and was designed by architectural firm Korb + Associates (Boston), with Thornton Tomasetti as the project’s structural engineer.

According to The Architect’s Newspaper, the first five stories of the mixed-use development would feature cast-in-place concrete, with up to 8,100 square feet of ground-floor retail and four stories of enclosed parking above that. Moving farther up the tower, the remaining 16 stories were slated to contain 205 rental units and would be built from mass timber fastened with steel connectors.

Partner and project architect Jason Korb reported at the time that because the project planned to use the prefabricated timber, the 16 residential stories could be installed in only four months. Additionally, the mass timber’s structural elements were stated to be fire resistant, in the sense that in the event of a fire, they would only char and not burn through.

In March 2019, the rezoning for the residential tower was unanimously approved by council and, in May, the United States Department of Agriculture’s Forestry Service division awarded the project with an undisclosed grant. In total, the division awarded 41 grants totaling $8.9 million, suggesting that an average size grant would total roughly $217,000.

Urban Milwaukee reported that the received grants would be used for support engineering work and was already engaging with Catalyst Construction (Milwaukee) on pre-construction plans.

By August, another proposal was sought by city zoning approval to add two floors to the Ascent tower, bringing the structure’s total height to 23 stories.

However, in September, the Milwaukee Plan Commission and the Zoning, Neighborhoods and Development Committee unanimously approved changes to the project, making the structure even taller.