To meet the goals of the 2015 Paris Agreement, Norway has recently launched work on what it’s calling “Project Longship”—a 1.7 billion euro ($2.01 billion) project that plans to bury up to 1.25 billion tons of captured carbon dioxide under the North Sea.

“There are no guarantees, but we know that carbon capture and storage is absolutely necessary for Europe and the world to reach the temperature targets in the Paris Agreement,” said Tony C Tiller, state secretary at Norway's Ministry of Petroleum and Energy.

“However, the success of this project depends on other projects and countries following suit. Other countries must support the capture and storage of CO2 as a relevant climate measure.”

Compelled by the Paris Agreement to achieve net-zero emissions by 2050 to give the world a chance of capping global warming at 1.5 degrees Celcius above pre-industrial levels, Norway has devised a carbon capture and storage (CCS) project that will bury collected CO2 reserves below the North Sea.

The project is not only expected to help Norway reach its carbon-neutral goals but will also create thousands of new jobs in the process.

In a white paper on the project, the Norwegian government reported that in December 2020, there was no sufficient incentives in the current market to implement, nor develop CCS. “This is in part due to high investment costs, low-income potential in the short term and high risk,” the document read. “In addition, the price of emitting greenhouse gases is lower than the cost of CCS, and the development of technology may have the characteristics of a public good.” 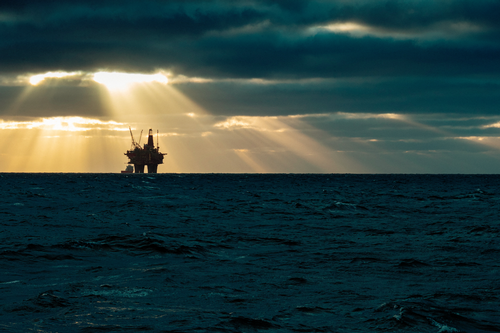 piola666 / Getty Images
To meet the goals of the 2015 Paris Agreement, Norway has recently launched work on what it’s calling “Project Longship”—a 1.7 billion euro ($2.01 billion) project that plans to bury up to 1.25 billion tons of captured carbon dioxide under the North Sea.

“Northern Lights is in dialogue with 60 potential customers who want to decarbonize industry in Europe,” Tiller said. “Earlier this year, draft commercial agreements for the storage of CO2 were sent to 15 companies.”

Another industrial partner involved with the CCS project, Heidelberg Cement, plans to convert its cement factory into a carbon-neutral plant, where it will capture all of its carbon emissions and covert them into liquid for underground storage.

Phase one of the project is expected to be completed by 2024 and plans to have a capacity of 1.5 million tons per year.

“The industry players are now well underway with the work,” said Tiller. “The first contracts have been outsourced to Skanska, Aker, Kvaerner and more. The Ministry of Petroleum and Energy has approved a plan for development, construction and operation for the storage part of the Longship project.”

The project aims to kickstart the CCS market by developing technologies and lowering the cost of capturing and storing atmospheric CO2.

“Longship will demonstrate that CCS is safe and feasible and will facilitate learning and cost reductions in subsequent projects,” Tiller concluded. “Infrastructure will be developed with additional capacity that other projects can utilize. Hence, the threshold for establishing new carbon capture projects will be lowered.”

At the beginning of the year, President Joe Biden issued a statement announcing the United States recommitment to the Paris Agreement, done at Paris on Dec. 12, 2015.

Biden accepted the Agreement, including every article and clause thereof, on behalf of the nation.

Previously, the U.S. had formally entered the Agreement in September 2016 under former President Barrack Obama. Short-lived, the following year after the inauguration of former President Donald J. Trump that fall, Trump announced in June that he was withdrawing the U.S. from the Paris Agreement and would attempt to negotiate a new pact with what he deemed to be better terms.

Trump’s move was not a surprise; he had made campaign promises to exit the Paris Agreement, which was drafted in 2016 to take effect in 2020, and had been signed by 195 countries. The agreement seeks to limit global warming attributed to emissions. (The U.S. is the world’s second-largest emitter of greenhouse gases, behind China.)

Trump’s decision prompted a swift response from the architectural community, and in 2019, the American Institute of Architects spoke out a second time on Trump’s official decision to withdraw from the Paris Climate Accord.

Prior to Biden announcing that the U.S. would be recommitting to its climate goals, while running for office, the Biden-Harris transition team released its plan regarding climate change, highlighting the incoming administration’s early priorities.

Like what’s currently happening in Norway, the team highlighted CCS technology, believing that it would be welcomed by a traditionally divided Congress. While the technology wasn’t specifically outlined in the transition document, CCS and other forms of negative emission technology have been long promoted by Biden throughout his time as presidential candidate and is noted in his campaign climate plan.

According to MIT Technology Review, the tech involves a number of approaches, including methods of drawing greenhouses gases from the atmosphere, like witnessed in carbon-sucking machines, as well as speeding up the process of carbon capturing minerals and the absorption of carbon into plants, which could then be converted into fuel sources and capture any resulting emissions.

Overall, Biden intended to dedicate $1.7 trillion to overhaul energy, transportation, agriculture, and other sectors. According to the transition document, the team would go beyond just recommitting the nation to the Paris Agreement on climate change, and aimed to build a more resilient, sustainable economy through the creation of union jobs within these new investments.

The company currently looking to commercialize its technology with other industrial customers and funders. MCi is headquartered in Canberra, Australia, whiles its research and technical facilities are located at the Newcastle Institute for Energy Research where it operates its pilot plant facility.

The only issue that Hamblin Wang ads about this is that at this time, steel and cement industries don’t have viable decarbonization options.

Also in June, the Morrison Government announced that it would be backing six new carbon capture projects to accelerate the development of the technology in Australia, boosting its role in reducing emissions and supporting new economic opportunities and job creation.

As a result, six companies were awarded a share in the government’s $50 million Carbon Capture, Use and Storage (CCUS) Development Fund. Together, the projects are slated to create close to 470 direct jobs and deliver $412 million of investment, much of this in regional areas.

And in May, In May, MCi closed a deal with Japanese giant ITOCHU Corporation (ITOCHU) to promote applications of MCi’s low emissions carbon utilisation technology using ITOCHU’s group network. Specifically, MCi and ITOCHU signed a Memorandum of Understanding giving ITOCHU rights to identify and develop market applications for MCi’s technology with Japanese groups.